A new pre-print deals with the characterization of neutrophil phenotypes in an attempt to provide biomarkers that can predict severe disease in patients hospitalized with coronavirus disease 2019 (COVID-19). 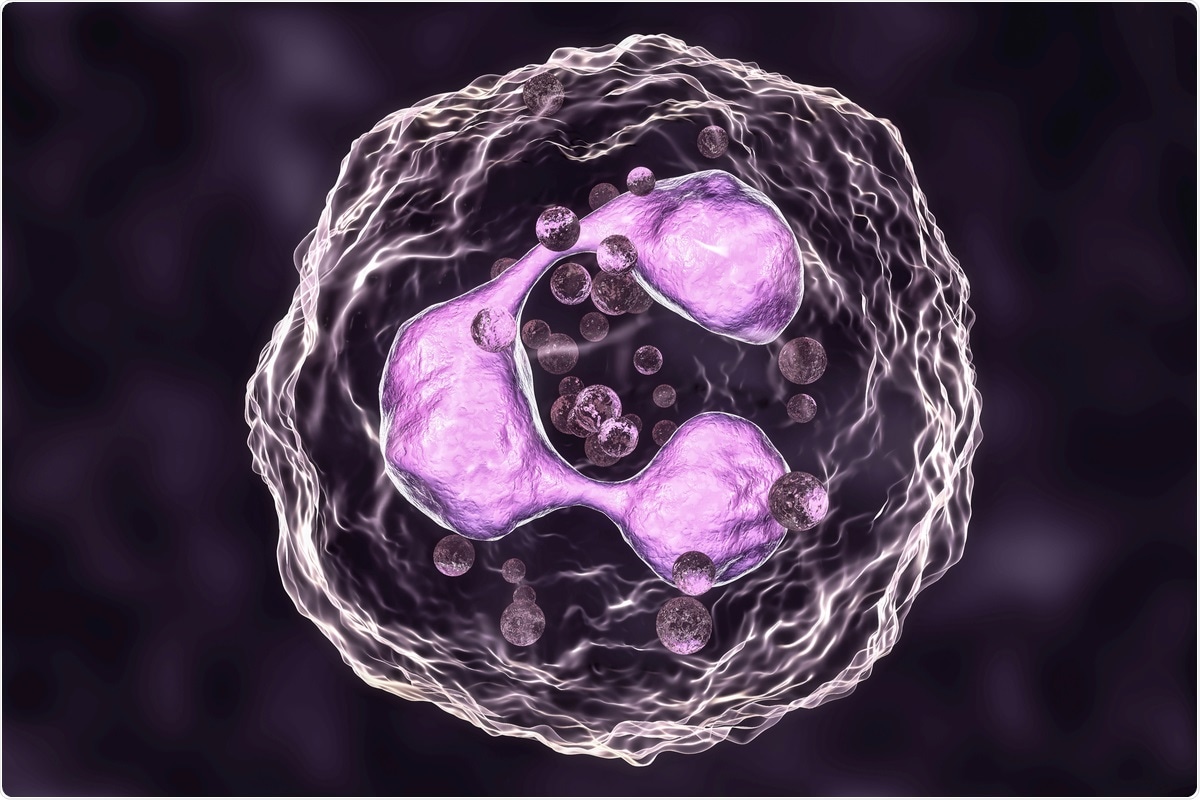 Neutrophils have been reported to be hyperactivated by severe COVID-19, and some researchers believe that this phenomenon indicates that these cells are closely implicated in the underlying disease mechanism.

Neutrophils can eliminate pathogens bound to antibodies directly in a process called antibody-dependent neutrophil phagocytosis (ADNP). Alternatively, they undergo NETosis, a dedicated cell death program in which neutrophils release their chromatin extracellularly as a web, modified by antimicrobial and highly reactive proteins, such as myeloperoxidase, to form neutrophilic extracellular traps (NETs).

The NETosis, which occurs in cancer, viral infections, and heparin-induced thrombocytopenia, is driven primarily by interactions between antibodies and Fc receptors, modulated by factors such as the isotype of the antibody and the type of sugar associated with the antigen. In COVID-19, NETs may be involved in heart attacks and immunothrombotic events.

The present paper describes a study of blood neutrophils from a large group of such patients using several methods to delineate the dynamic neutrophil response to severe acute respiratory syndrome coronavirus 2 (SARS-CoV-2).

The results showed that the absolute neutrophil count (ANC) was related to creatinine, C-reactive protein (CRP), lactate dehydrogenase and D-dimer, all acute phase reactants. The ANC was also strongly correlated with intubation risk, which increased from day 0 to day seven.

The virus elicits a robust interferon response, both IFNγ and IFN-α, along with cytokine production. Various neutrophilic states were found to be associated with severe and non-severe COVID-19.

From the day of admission onwards, very early neutrophilic states allowed the final severity of the disease to be predicted with great accuracy. Several metabolic circuits went from being enriched on day 0 in those who would not survive, to being enriched on day seven in the eventual survivors.

This included delayed or dysregulated interferon signaling. Some studies have shown that this can lead to increased interferon activity, resulting in activation of immune cells when the lungs are already heavily inflamed. This may increase the risk of death.

Interferon-stimulated genes were also enriched early in survivors but late in those who died. The metabolic pathways showed the opposite direction, with fatty acid metabolism, tricarboxylic acid cycle, and NADP pathways being enriched in fatal cases on day 0, while day seven enrichment corresponded to surviving patients.

Proteins that enhance histone modification can only be detected via proteomics, as they are post-transcriptional modifications. A search for such markers showed that they were associated with the severity of the disease at all times across neutrophilic subtypes.

Neutrophils also prevent T cell activation and proliferation. The researchers also found that only IgG: S immune complexes had a strong ADNP effect and induced reactive oxygen species (ROS) to a higher level in severe COVID-19 than non-severe. NETose from healthy neutrophils was much higher when incubated with IgA than IgG, regardless of severity.

Among non-severe patients, MPO was reduced with IgA compared to IgG, indicating that the latter stimulates higher production to accelerate ROS via MPO.

What are the consequences?

In all cases, an interferon-driven phenotype was seen, but decreased over time to be replaced by an suppressive signature or a neutrophilic progenitor signature in severe and non-severe COVID-19, respectively. Higher interferon levels were found on days three and seven in fatal cases, making this a potential biomarker predicting serious illness.

IgA and IgG have different effects on neutrophil effector functions with a high IgA1 / IgG1 ratio in fatal cases compared to survivors. This suggests that the antiviral antibodies and neutrophil effector functions mediate serious results in COVID-19. The researchers suggest an initial IgA-driven mucosal response to the entry of the virus, followed by IgA-secreting B cells that flood the bloodstream.

‘All your friends were dying’: revisiting the horrors of the Aids crisis | Podcasts

Prioritization of Ozempic supply for type 2 diabetes during shortage i

Toronto Councilor Ana Bailão will not run for re-election