Do you know the man on the train?

Armed French police yesterday boarded a London-bound Eurostar and arrested a British passenger after a train conductor accused him of wearing the ‘wrong type of mask’.

The extraordinary drama saw the unidentified man – who is in his 40s and is believed to be from Liverpool – being pulled by the train after making an emergency stop in Lille, northern France.

He was then surrounded by at least eight uniformed officers and then left stranded as the train resumed its journey to England.

Eurostar requires all passengers to wear a mask on board, but a spokesman today said there were no rules on what kind of masks to wear.

Other passengers in the service said the female leader of the train took an aversion to the man after an exchange of words and ordered the service to stop so he could be arrested.

‘I have done nothing wrong and respect all Coronavirus rules – it’s outrageous,’ he said as he was led away in front of other stunned passengers on Thursday afternoon.

He added: ‘I have absolutely no idea what this is about, except that a Eurostar employee has received me a lot and accused me of not wearing the right type of mask.

‘Now I am left alone in France when all I would do is come home from a work trip. This is a very cruel treatment. We should all move on and not treat each other like that. ‘ 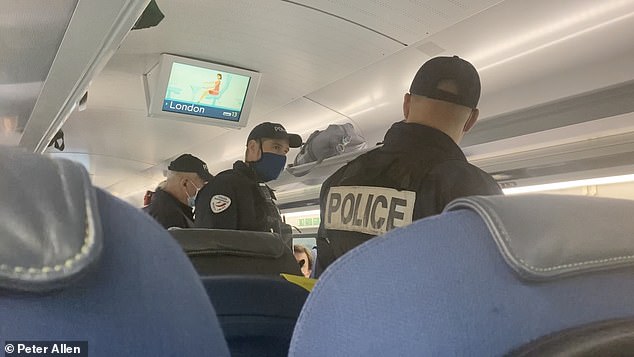 What are the Eurostar mask rules?

All Eurostar passengers must wear face masks at train stations and on board.

The rule applies to all passengers, including persons who are fully vaccinated.

A spokeswoman for the press said she was not aware of specific rules about what type of face covering passengers should wear.

Other passengers then complained about the unplanned, unannounced stop in Lille, which caused a delay of 15 minutes.

‘Why does Eurostar stop its trains and delay hundreds of passengers due to a small dispute over a man’s mask?’ said one.

The female Eurostar manager, who remained on the train after the man was remanded in custody, confirmed that she had reported him for using the ‘wrong mask’ to prevent the spread of Coronavirus.

Asked why the man had been forced off the train, one of the Lille police officers confirmed that he had been arrested and said: ‘We do not know why, we will have to find out.’

It was to travel directly to London and arrive at St Pancras at. 14.39 British time-barely two and a half hours later.

But within minutes of departure, the Eurostar manager was involved in a heated altercation with the man. 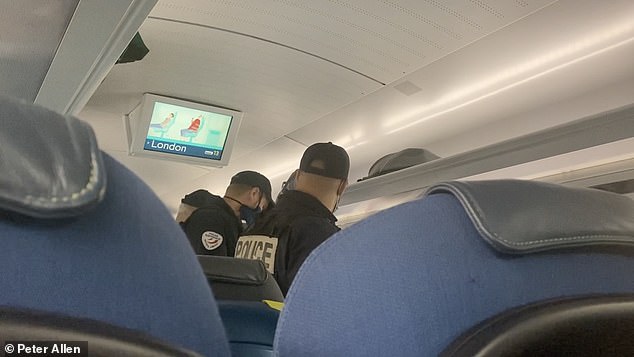 The man was pulled by the train in Lille, northern France, by eight uniformed officers after he was reported by a Eurostar manager

She accused him of not complying with health and safety regulations and said the black mask he was wearing was not appropriate.

All Eurostar passengers are expected to wear masks at all times, except when eating or drinking.

There was a buffet on the train, and many of the passengers in Coach 13 — where the man was sitting alone by a window in a two-seater row — had removed their masks completely as they had sandwiches and drinks with them.

Despite this, the manager robbed the man and then used a radio to summon another employee.

She then said she would alert police in Lille to ensure the man was removed ‘as soon as possible’.

The businessman then replaced his black mask with a standard blue mask provided by another passenger. He apologized and seemed to have escaped any further action. 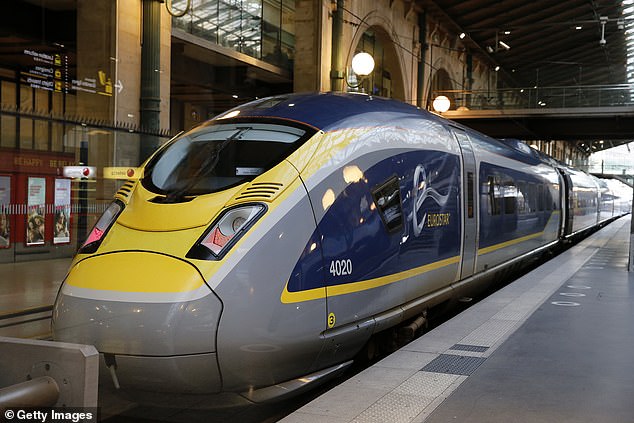 All Eurostar passengers are expected to wear masks at all times, except when eating or drinking

But when the train arrived in Lille, it made an unplanned stop, and three armed officers went on board while the others waited on the platform.

‘It was ridiculous,’ said another passenger, a 32-year-old woman in London, who asked to be referred to her first name, Li.

‘The Eurostar woman told the police what to do and insisted that the poor guy be removed, as if he were some kind of criminal.

‘He was actually very sensible and did not swear or act in any way disruptive at all – everyone else was on his side, but he was marched off and we did not see him again.’

The Eurostar manager remained on the train until St-Pancras and was seen leaving the train with a backpack.

Eurostar later issued a statement on the man’s arrest.

It reads: ‘Eurostars’ transport conditions clearly state that face masks must be worn throughout the journey within the stations and on board, and that non-compliance may result in refusal to travel.

‘Unfortunately, a passenger on board a service from Paris to the UK on Thursday repeatedly removed his mask both at the station and on board despite gentle reminders from staff.

‘During the voyage, the passenger became aggressive and intimidating towards the team on board as they politely reminded him to wear a mask as required under our conditions of carriage.

‘Eurostar teams have a responsibility to ensure the safety of all occupants and this behavior of our staff cannot be tolerated.

‘As a result, the passenger was asked to leave the train at Lille station, and in this situation it is normal procedure for the police to attend and help.’

The governments of France and the United Kingdom are currently waging a war of words over Brexit and fishing rights.

Paris has threatened to cut off Britain’s access to energy markets and impose trade tariffs as part of ‘retaliation measures’ after dozens of French fishermen were denied permission to trawl British waters.