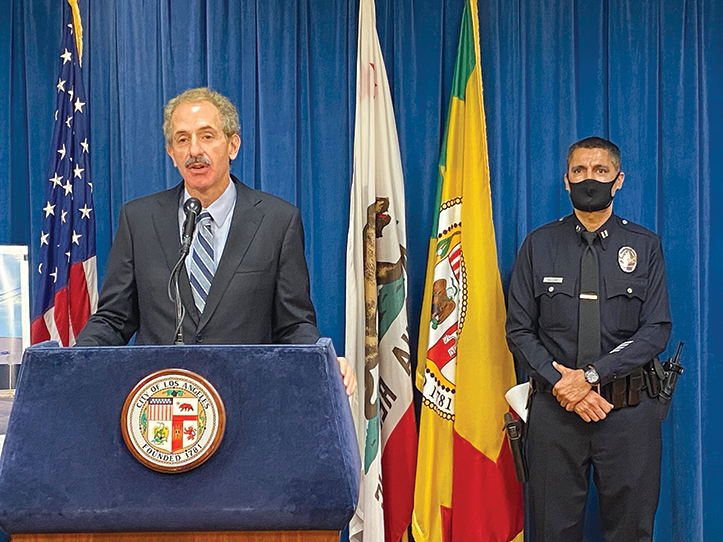 Feuer said the illegal businesses were located in different places and were not connected. The Los Angeles Police Department received complaints about each of the sites and conducted investigations that led to raids. All three illegal businesses have been closed permanently, Feuer said.

One of the illegal nightclubs allegedly operated in a building at 800 N. El Centro Ave., on the corner of Waring Avenue. The LAPD received complaints from nearby residents on Aug. 22 and sent officers to investigate. Authorities found a large party in the building with DJs playing loud music and alcohol being sold, Feuer said. Officers broke up the party, arrested an undisclosed number of people and confiscated several firearms, he added.

On August 29, the LAPD responded at the same location after receiving calls for shots. Officers found another party held in the building and a man who had sustained multiple gunshot wounds, Feuer said. The victim was treated and survived. Police determined 20 shots were fired, some hitting the building next door, Feuer added. No suspects were arrested for the shooting, but police found a gun at the scene, he said.

Officers regularly monitored the location and returned Sept. 1 and Sept. 3 to find additional parties in the building, Feuer said. They broke up the parties and arrested the alleged hosts. Two more handguns and DJ equipment were confiscated.

Feuer said the alleged operators — Rami Ben-Moshe, 61; Jason Williams, 43; and Khani Rice, 24, face 12 offenses, including unlicensed distribution of alcohol, violating noise and permitting live music, and operating an unlicensed ballroom. Ben-Moshe and Williams risk up to five years in prison and $ 10,000 in fines if convicted. Rice risks a year in prison and a $ 2,000 fine.

Another illegal nightclub reportedly operated in June at 6024 Santa Monica Blvd., in a commercial building that houses several car shops. The building is located on the south side of Santa Monica Boulevard, next to Hollywood Forever Cemetery and within 150 feet of a school, Feuer said.

Officers responded to a complaint on June 27 and found a party on the spot with security guards charging at the door, Feuer added. They broke up the party, arrested the alleged host, Francesco Conte, 53, and confiscated a large amount of alcohol. Conte has been charged with four misdemeanors for unlicensed alcohol supply, noise violations and operating a dance hall without a permit. Conte risks two years in prison and $ 4,000 in fines if convicted.

Feuer said authorities closed an illegal casino at 5547 Santa Monica Blvd. in mid-September and arrested the alleged operator, Brandon Chang, 29. Authorities heard about the illegal business from a person allegedly beaten and robbed at the scene in August and later reported it to police. Officers from the LAPD’s Hollywood Division conducted an undercover operation and sent in an informant confirming that there was illegal gambling. The informant allegedly also bought methamphetamine on the spot, Feuer said.

Police attacked the illegal casino on September 17 and confiscated gaming equipment, ammunition and a large amount of hashish, Feuer added. Officers also arrested Chang, as well as several other people who were taken into custody for warrants and violation of probation. Chang faces a misdemeanor for allegedly conducting business for a purpose other than that for which he is serving, and risks six months in prison and a $ 1,000 fine. Feuer said the casino was in an indoor swap meeting where another room is used as a church.

Captain Yasir Gillani, chief of patrol operations for the Hollywood Division, said authorities have proactively monitored the sites and that no further violations have been observed or reported. Gillani stressed that it is imperative that people report illegal activity.

“This was a great partnership between all parties involved, people who realized there were problems in their neighborhood and let us know and our investigators could go out and check it out,” Gillani said. “It’s a collaborative effort where everyone came together and we were able to solve a problem.”

“The only way we can effectively take the steps we need to make Los Angeles the city we know it can be is to interact with each other,” Feuer added. “People need to be sure that if they report allegations, they will be followed up, and that’s one of the reasons why I was so focused on emphasizing the enormous work of the LAPD, which repeatedly went to these places and took extraordinary steps to ensure the nearest neighborhood was made safe. ”