22 large watercolors form the main element of Bronstein’s show, specially made for the Sir John Soanes Museum, which explores the spaces and districts of the city ‘Hell’. The eclectic, packed subject image of each work clearly cuts off the architectural cornucopia that the museum itself houses, as well as works such as Hieronymous Bosch’s painting Garden of Earthly Delights the monstrous and amazing creatures seen in the latter replaced here by monstrous and amazing buildings and structures. 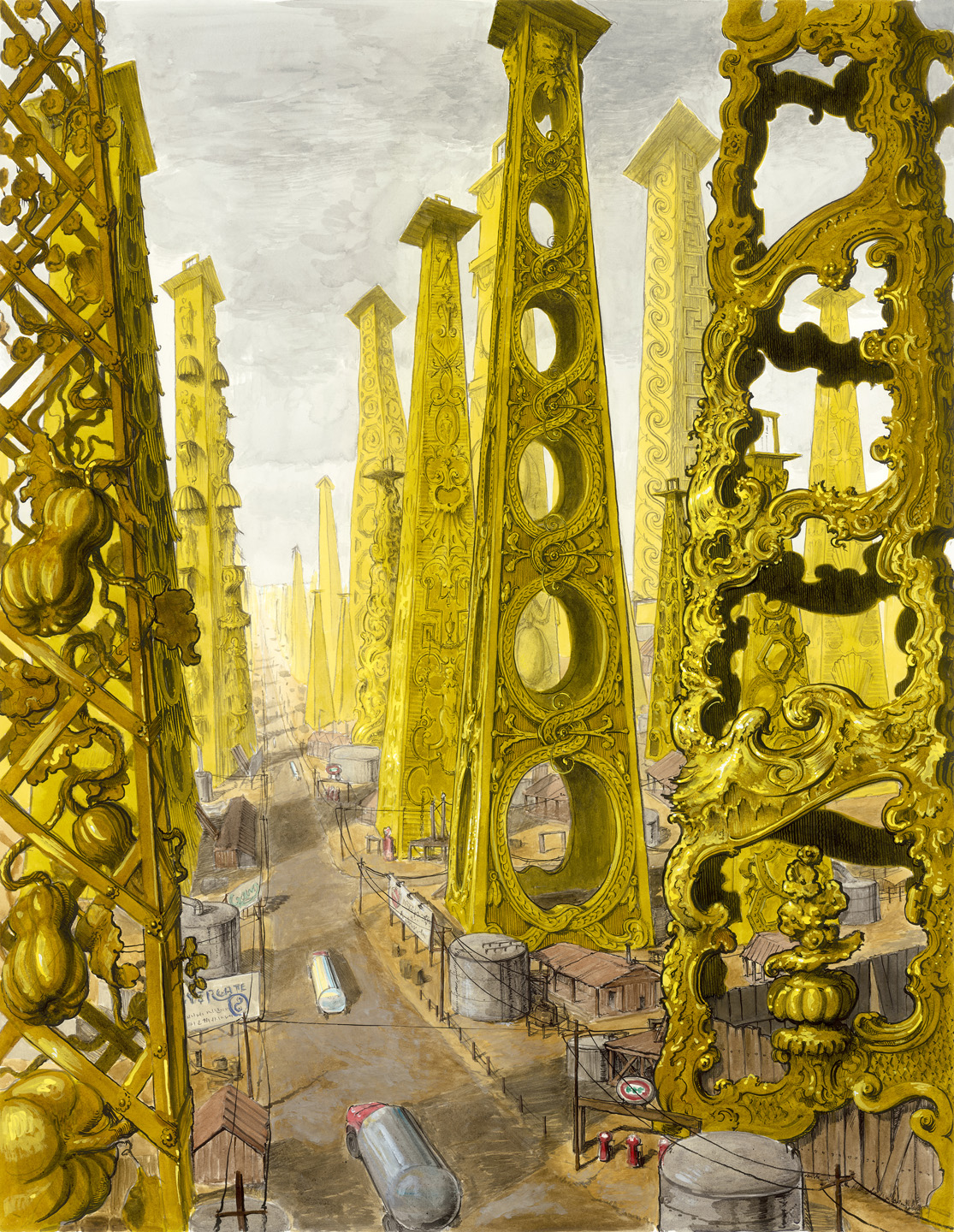 It is a mixture of stylistic referees from Baroque Rome to the mid-century Atlantic City, Beaux-Arts France, Fritz Lang’s Metropolis and early 20th century Detroit. Here, oil rigs like gilded rococo candlesticks, skyscrapers and super-thin apartment blocks are lined with towering lurid-colored cakes and confectionery and cyborg baroque robots that dominate a large car factory. There is not much complexity in the allegorical meaning; it’s pretty bubbly. In the background of Botanical Garden there is a building similar to Albert Speer’s large projected Volkshalle in Berlin, while the sea barge enters Container ship, which appears to belong to a 17th-century Spanish fleet, is weighed down by red and white shipping containers.

This message of excessive, thoughtless consumption is also the underlying message of the film, produced in collaboration with performer and choreographer Rosalie Wahlfrid. It shows masked antique dealers as players in a stylized kabuki-style dance with luxury shopping and property acquisition. 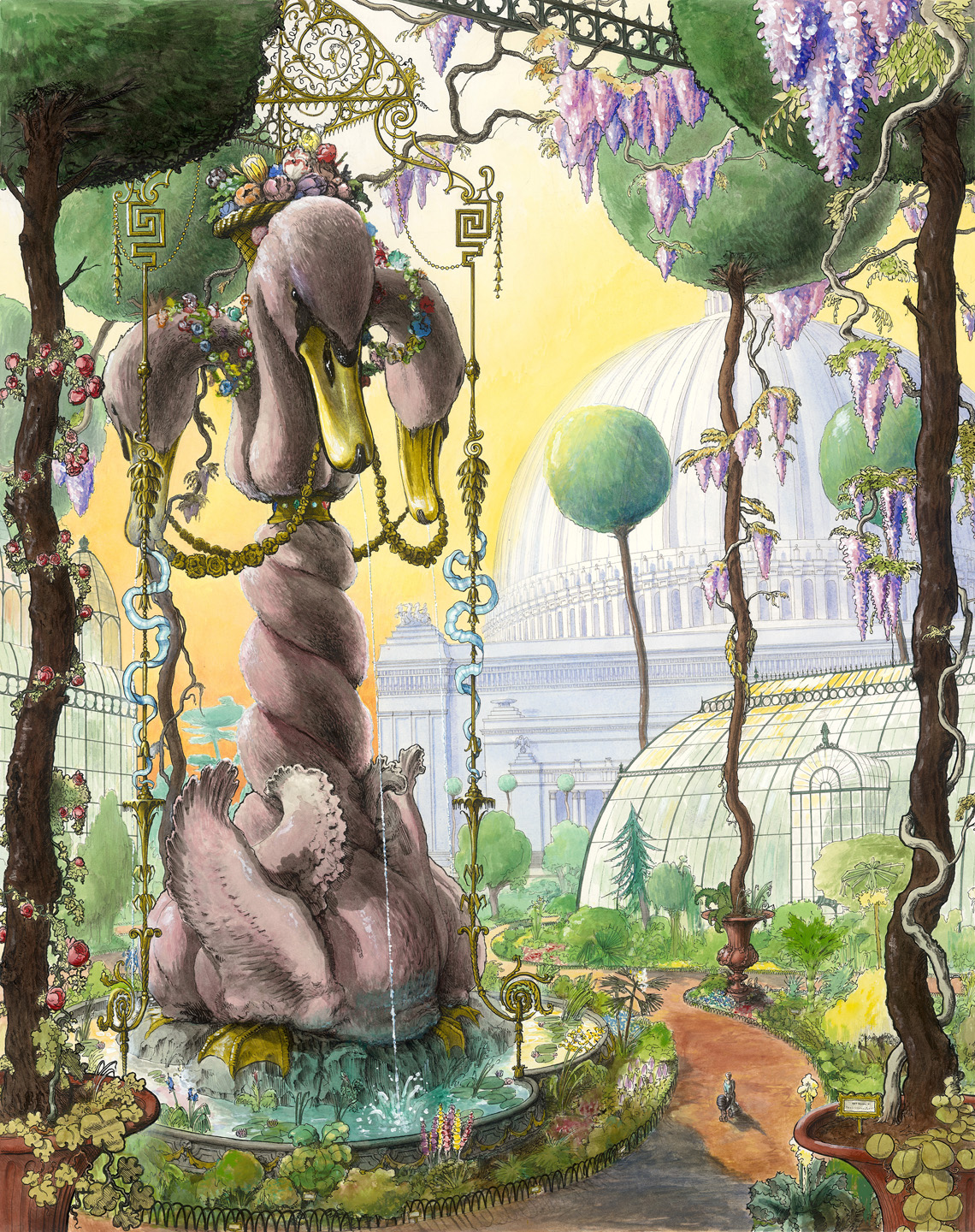 Bronstein’s work, especially that on paper, has always been amusing for its light, witty bid for representational conventions that shed new light on old forms, especially the tradition of the architectural capriccio – a representation of often fantastic whimsy.

This was seen in his brilliant 2008 book Postmodern architecture in London, with its piranha etchings of 1980s buildings by Terry Farrell, CZWG and others represented as romantic ruins in decay. It was work that apparently previously laid the foundation for the Pomo revival that would follow. As with any good capriccio, the pictures in the book seem for their lyrical wit and suggestive sketchiness, leaving the viewer’s imagination to fill in the blanks.

In this show, however, the references, in contrast to the extra style of many of Brontein’s earlier images and drawings, are stacked up in a riot of inconsistent shapes and colors. The OTT portrayal of profit, pleasure, and forbearance is, of course, the point, but it’s a point that might have been made without being so strenuous, and on the whole, the show feels a little indulgent. Bronstein’s facility and ‘wonderful invention’ – as it might once have been called – in imagery and handling of composition are undoubtedly impressive, but as a viewer you can not help but feel a little softened by the lack of subtlety in content and message as you move you around the show. 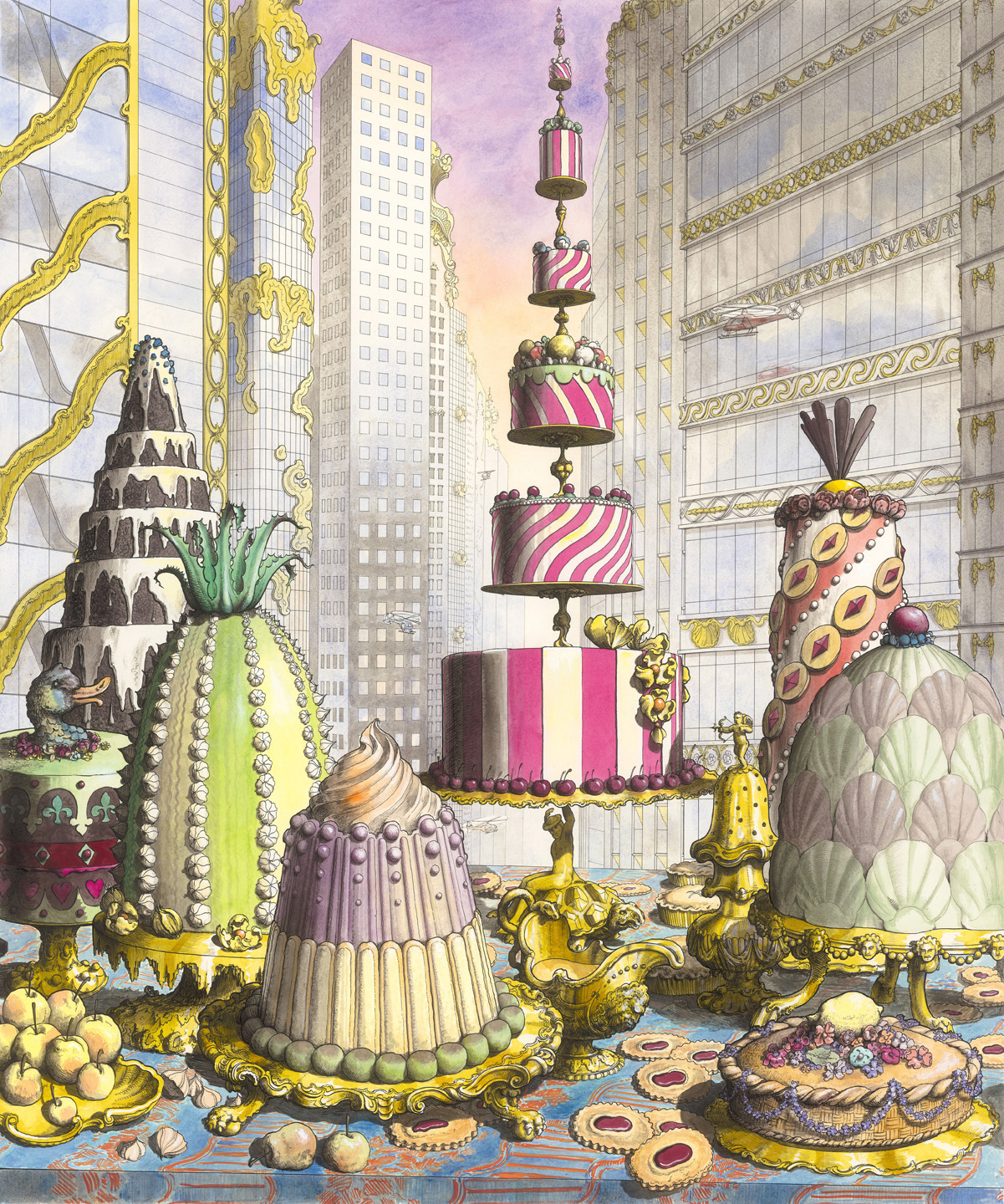 Every little fantasy space left is sucked up by hard-handed captions for each work, which helpfully explains all the references rather than just letting the viewer enjoy the images and make the connections themselves.

The fever dream aspect to the whole show is perhaps understandable as the work was produced during the lockdown, with the original planned opening delayed, during which time apparently extended. But as such, it all feels a little too much; dreams are often more powerful when remembered in fragments.

The work here, while undoubtedly a tour-de-force, is set up for the wow factor and the viewer’s admiration – not least to be timed to be open during Frize Week, when the citizens of the art world will be in town – but leave little room for their imagination.