Andros Townsend channeled cheeky Cristiano Ronaldo as Everton hit back at an expectant Old Trafford to earn a 1-1 draw with Manchester United and maintain scrutiny of Ole Gunnar Solskjær.

The match-winner in the middle of the week against Villarreal made his 200th Premier League appearance in the second half, but Everton were eight minutes later (58) when Townsend ended a blistering outburst from a United corner – and then mimicked Ronaldo’s trademark party.

This time, there was no shirt-peeling late hero from the milestone man, but rather drama at the other end as Yerry Mina knocked on five minutes from time to time to seal what looked like a wild away win until a VAR check confirmed him offside.

United fans could fleetingly celebrate the decision, but frustration eventually reigned again as Ronaldo marched down the tunnel at the whistle, though Townsend would later declare the game’s defining image a nod to his “idol” rather than a provocation.

Although the hosts missed going to the top of the table for at least a few hours, the wider context was lingering issues, lasting fragility and only two wins in six with a formidable run of matches on the horizon.

Man of the match: Demarai Gray.

Ronaldo had been named on the bench – for the first time in a Premier League match here since May 2007 – after his A-list’s intervention in a significant call from Solskjær, who admitted that the Champions League game had constituted a “great physical and emotional output “.

Martial put his head on an Aaron Wan-Bissaka cross, the front one stretched under pressure from Townsend, and Edinson Cavani went closer in the air, flicking Fred’s pass goal, but did not find the kind of power or position that really bothered Jordan Pickford.

United were so dominant early on that Salomon Rondon’s first touch was a sudden shot on goal, the striker denied by a Victor Lindelof block, but Everton were delayed gaining a foothold and a series of home blocks and half clearings left anxiety in the air, David de Gea urged to refuse the rejuvenated Demarai Gray with a strong hand and Solskjærs side again look vulnerable.

A melee triggered by Scott McTominay’s meaty challenge on the lively Anthony Gordon only added the edge, but Martial made a timely home-breaking moment before the break, cutting in from the left and opening after Greenwood had broken lines and Fernandes made a yard with a star-studded touch.

It turned out that the antidote to Everton stuck after the interval, United maintained momentum and soon booyed by a double change when Sancho was finally let loose, Ronaldo reached another milestone and Ole, then said Stretford End, was at the wheel again.

The visitors retreated as Sancho dizzy with stepovers, but from a home corner they were just before the hour mark after a fantastic break. Gray bullied Fred at the sideline, and when Abdoulaye Doucoure broke up with Lindelof and Luke Shaw, who were in contention, Townsend was free to drill low past De Gea and enjoy the moment.

A nervous look Solskjær turned next to Pogba as Ronaldo sought to provide more inspiration, but his one moment turned into nothing, a shot with his left foot flashing well wide and he would quickly head quickly down the tunnel.

Everton appeared to have put United away when Mina knocked on a Tom Davies pass as United’s defenders followed the ball rather than man again, but the goal was ruled out in a narrow offside call and Davies chose the wrong option.

Solskjær’s side were barely noticed when they stumbled into the international break, and Everton, a cohesive unit under their cunning tactics, were rewarding.

Solskjær defended his decision to leave Ronaldo on the bench and insisted on a need to manage the workload.

Asked if he had any regrets about his team selection, he said: “No. You make decisions through a long, long season; you have to manage the workload of the players and the decision for me was the right one. Anthony Martial did well, scored a good “Edinson needed minutes and could have had a goal. We have to make those decisions at that point.”

What else did the leaders say …

Ole Gunnar Solskjær says that he does not ‘regret’ that he started Cristiano Ronaldo on the bench after Manchester United’s 1-1 draw with Everton at Old Trafford.

Man Utd boss Ole Gunnar Solskjaer: “We were hit on a break that cost us and we lacked that lead to get the important second goal. We made a couple of decisions that cost us. We had players behind the ball when the ball was delivered and we had to have handled it We have to work on it because we face more and more opponents who allow us to have possession.

“It’s a big month. We need to be focused and make sure we use the international break well. Come back with energy and clear focus. The mindset is good, the players are hungry to get better. We dominated the game but just could not get the second goal you need in games like this.

“I’m convinced we’ll get the best out of this squad. A lot has happened this month [player arrivals]. We have a lot to work with, but I believe in these players and this coaching staff. I think we have something going on, but evidence is in the pudding. “ 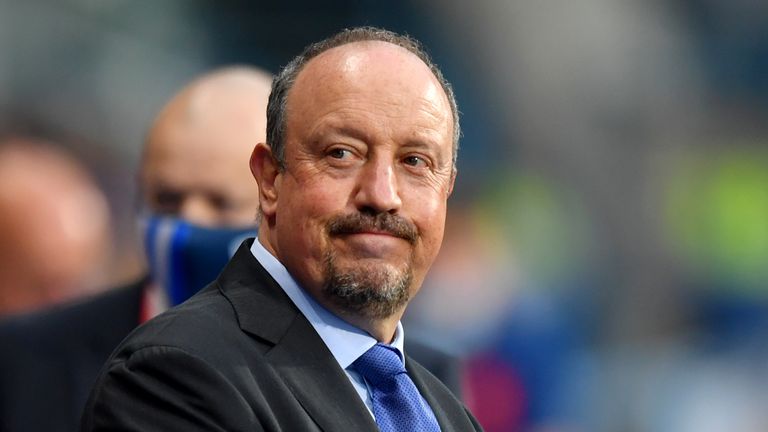 Rafa Benitez says he is happy with Everton’s points at Old Trafford, but believes a 1-1 draw with Manchester United could have been ‘even better’ for his side.

Everton boss Rafa Benitez: “I’m really happy, because to come here and perform the way we did, the chances we had, the way we defended against a very good team, we have to be really proud of the players and everyone.

“In the second half, the team reacted well and we still had chances to win the match. Townsend is doing well, his commitment and quality are there. But it’s not just one player doing well, he was fantastic, but the rest of The team worked so hard. “

“This guy is my idol. I grew up watching him, hours on the training ground and trying to perform his techniques, maybe need to spend more time at his party! It was not great performance!

“But it was respect for Ronaldo, honored to be in the same field as him.”

Manchester United’s next Premier League Test is in Leicester on Saturday 16 October (kick-off 15:00) with a home ground on Champions League date with Atalanta four days later.

It does not get much easier; United face a formidable set of matches in October and November as they look to keep pace with the Premier League and secure Champions League qualification, with Liverpool, Chelsea, Arsenal, Tottenham and the Manchester derby threatening domestically.