Police chase hit and run Audi driver as girl, 14, is seriously injured in hospital and 17-year-old needed treatment after both were beaten down Saturday night


Police are chasing an Audi driver in Bolton after two teenage girls were injured in a hit-and-run incident that left a person suffering ‘life-changing’ injuries.

A red Audi A4 collided with the two schoolgirls as they crossed the road on Great Moor Street in Bolton, but the driver failed to stop at the scene on Saturday at.

A 14-year-old girl was driven to the hospital with life-changing pelvic and stomach injuries is still in serious condition at the hospital.

The second victim, 17, sustained minor wounds and was treated on site in Bolton city center. 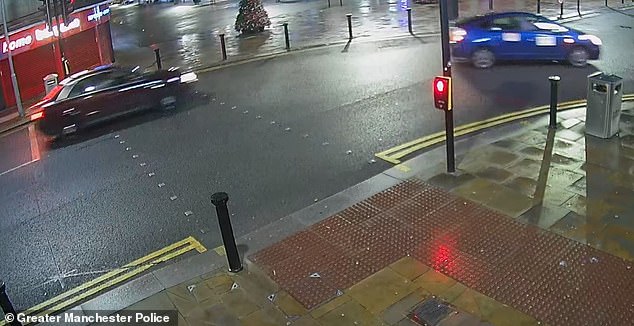 Police are now chasing the driver of the red Audi A4 and urging anyone with information to line up.

Greater Manchester police have confirmed they have not made any arrests and investigations are underway.

PC Thomas Berry, of GMP’s Road Policing Unit, said ‘This is a serious traffic accident where the offending vehicle has not stopped, leaving a 14-year-old girl in a serious condition in hospital.

‘I’m eager to talk to anyone who may have been in Bolton city center at the time of the collision and saw an older model dark red Audi A4 in the area.

‘Reports can be made anonymously to the independent charity Crimestoppers on 0800 555 111.’