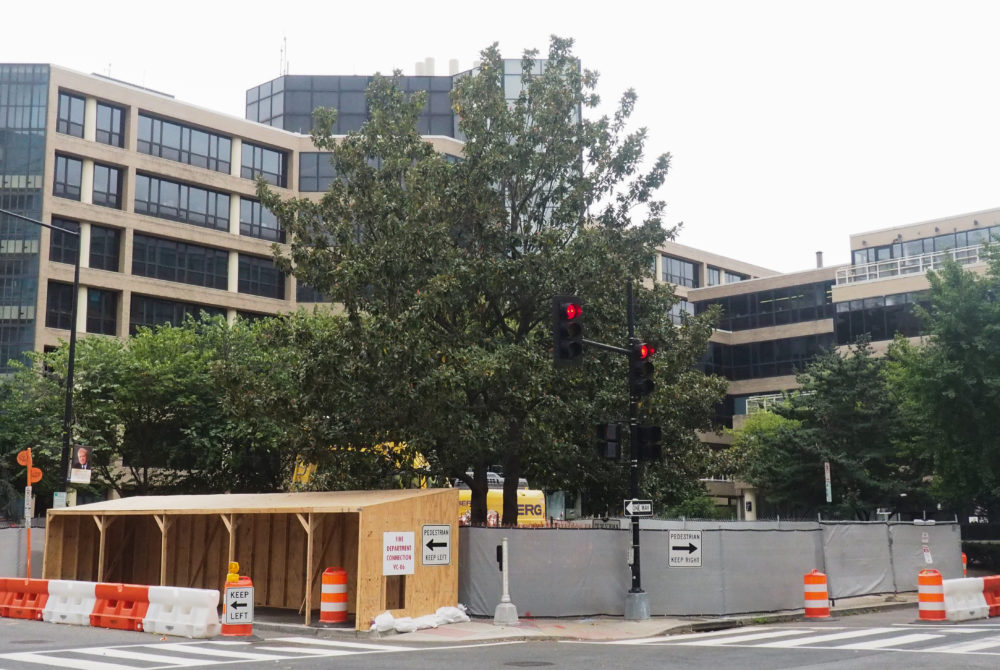 The Foggy Bottom Association tried to save the building from demolition earlier this year, arguing that the Waggaman House should be preserved for its “historic” value.

Officials have demolished the building that previously housed the Nashman Center for Civic Engagement and Public Service after months of opposition from local residents.

University spokesman Crystal Nosal said officials started the process of destroying the building, also known as Waggaman House, late last month and carried out the demolition last week. The demise of the building follows a battle between Foggy Bottom residents who wanted to save the building from destruction and locals who supported using the university’s plan to turn the plot into a green space.

Nosal said the contractor carrying out the demolition has diverted pedestrian traffic to a temporarily protected sidewalk on the street and the destruction of the building will take place during “permitted working hours” with some noise. She said contractors also built a wooden structure over an exhaust valve on I Street to cover a Metrorail line to prevent dirt from entering the grate.

“Standard construction noise is expected and will take place during permitted working hours,” Nosal said in an email.

Officials announced in February that the building would be demolished and that the space would be converted into an outdoor space for “community use.” Nosal said officials are still developing usage plans for the now empty party.

The Foggy Bottom Association tried to save the building from demolition earlier this year, saying the townhouse should be preserved for its “historic” value. Nosal said the university met with concerned residents, but continued the precedent for the 2007 Foggy Bottom Campus Plan, which found that the building, built in 1886, was not eligible for historic preservation.

“The historic conservation plan for the Foggy Bottom Campus identified individual buildings and collections of historic properties and proposed a historic district on the Foggy Bottom Campus as well as landmarks for several additional campus buildings in addition to those already designated,” Nosal said. “The building at 837 22nd Street was considered part of this process, but did not receive the designation as a historic site.”

Margaret McDonald, an advisory neighborhood commissioner whose district includes the former building, said she was not in operation when plans to destroy the building were completed, but she nonetheless supports the demolition. McDonald said the demolition of the building gives the university an opportunity to provide more housing or classrooms, and hopes GW will explore these options in the future.

“I support creating a new space where students can study and hang out, but I think the space could have been used for college expansion or classrooms,” McDonald said in an email. “Overall, I’m happy to see that the project is finally moving forward and something is happening with the space.”

McDonald said she understands the desire to preserve historic buildings in the district, but she felt the space should be used for something new, like a parking lot or other studio housing.

“I understand concerns about preserving historic buildings in DC, but this space needs to be used for something new,” McDonald said. “The Nashman Center is no longer located in the building, and there is potential in creating a new park in the area instead.”

James Harnett, a former ANC commissioner who used to represent the area where the party is located, said he supports the demolition of the building because of the opportunities it offers to expand the classroom and learning spaces for students. He said concerns that the university is destroying a historic building are unfounded and that the age of the building does not automatically make it a historic site.

“There are people who would like to say this is a tragedy and it’s a step back for the neighborhood and it just could not be further from the truth,” Harnett said.

Harnett said plans to use the new open space as an expanded park for several years is an “excellent” idea and hopes GW will build new facilities for Columbian College of Arts and Sciences students he believes deserves new learning spaces .

“We need to make sure students, the very foundation of this neighborhood, have room to learn that they need to feel valued and respected.”

John George, president of the Foggy Bottom Association, wrote a letter to the ANC in March asking them to urge GW to preserve the townhouse, which is the last remaining Foggy Bottom townhouse of the 11 built by developer Thomas Waggaman in 1886.

“The building is gone,” he said in an email. “I do not know what else to say.”

This article appeared in the October 11, 2021 issue of Hatchet.