The latest round of the Real-time Assessment of Community Transmission-1 (REACT-1) study indicates that the severe acute respiratory syndrome coronavirus 2 (SARS-CoV-2) continues to spread among children. 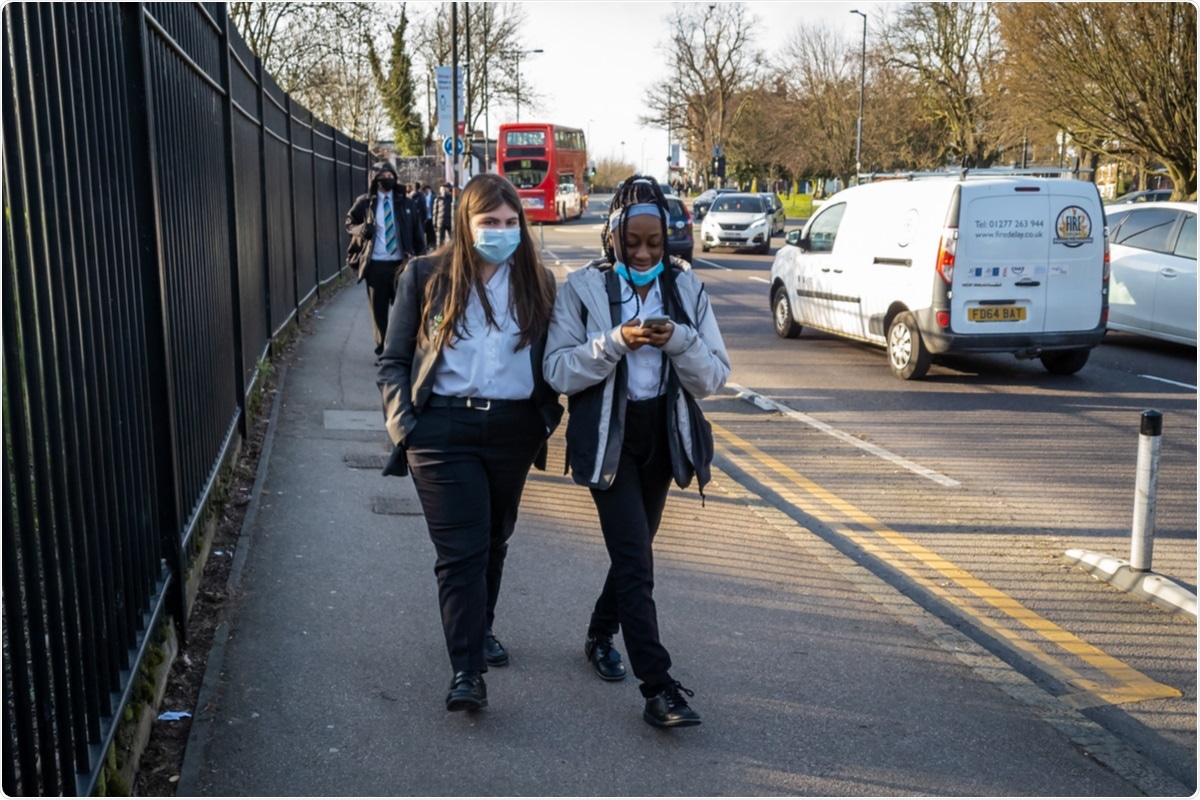 The pandemic with coronavirus disease 2019 (COVID-19) caused great damage to the UK during its first and subsequent waves. This led to one of the earliest deployments of COVID-19 vaccines in the world, beginning in December 2020. This prioritized the high-risk population of the elderly, healthcare professionals, and those with certain health conditions that put them at risk of severe COVID-19.

The third wave, which began in late May 2021, was mainly driven by the introduction of the Delta variant of the virus in September 2021. The COVID-19 vaccination effort was extended to 12-15 year olds and a booster dose in persons aged 50 or over, health and social workers and high-risk persons under the age of 50.

Despite a decrease in the daily number of vaccinations, almost 80% of those over the age of 12 had received two doses of the vaccine.

When schools reopened in September 2021, allowing free mixing of children instead of bubble groups and without contact tracking of schools, the incidence of COVID-19 cases confirmed by reverse transcription polymerase chain reaction (RT-PCR) also increased slowly.

The prevalence was 2.3% and 2.6%, respectively, in children in these two age groups. All samples were positive for the Delta variant or its progeny, and in one sample, the E484K escape mutation was also detected.

An overall prevalence of 0.8% was observed in round 14, up from 0.6% in round 13, even with potentially less sensitive sample handling in the former case. By age, the lowest prevalence was 0.3% in persons aged 75 years or older; conversely, it was 2.6% among the 13-17 years.

In the group under 18 years of age, the reproduction figure was R 1.18, indicating a growing epidemic. Conversely, the R-value of 0.81 indicated its decline among 18-54-year-olds.

The chances of becoming infected were thus 1.8 times higher and 2.4 times higher, with households with up to five and six or more members, respectively, compared to single or two-person households.

The highest prevalence was among contacts in a confirmed case, at 7.4% versus 0.4% among those without a history of contact.

The combined vaccine efficacy in rounds 13 and 14 for all participants and all vaccines aged 18-64 was found to be 63% after full vaccination compared to the unvaccinated. When analyzed by vaccine, the effect was 45% for the AstraZeneca vaccine but 71% for the Pfizer / BioNTech vaccine.

The overall vaccine efficacy against symptomatic infection was 66% overall. The incidence of positive inoculation samples was 1.8% among the unvaccinated. In contrast, 0.55% of those 18 years of age or older had been fully vaccinated 3-6 months before the test, and 0.35% of those who had received the second dose within three months of inoculation.

Unvaccinated individuals had a prevalence of 2.3% vs. 0.55% among the fully vaccinated.

What are the consequences?

The exponential increase in infections among people aged 5-17 years coincided with the reopening of schools in England for the autumn semester. The low vaccine coverage in this age group may be to blame for this, although children aged 12 or over are currently offered one dose. Vaccination reduces the positivity of the swab by three to four times compared to those who have received two doses, although immunity appears to decline after three to six months.

Vaccination has been shown to be very effective against severe COVID-19, but can also prevent infections by up to 90%.

Following the vaccination campaign, there has been a relative disconnect between infections and hospitalizations and deaths in the UK, the researchers say.

However, the relevance of a third booster dose is supported by the increased inoculation positivity among those who received the second dose 3-6 months earlier, compared to those who were fully vaccinated three months before. Continued monitoring will allow a better evaluation of the effect of booster doses in adults and pediatric vaccination on the spread of the virus.

Although vaccination positivity increased exponentially among children, it decreased among adults 18-54 years, probably the effect of high immunity due to both natural infection and high vaccination coverage. Vaccine-dependent variations in efficacy involve not only the type of vaccine, although important, but also the age group to which each was administered and the level of limitations at the time of vaccination.

It is important that the vaccination program maintains high coverage and reaches out to children and unvaccinated or partially vaccinated adults in order to reduce infection and related disruptions in work and education.. “