The Corona Disease 2019 (COVID-19) pandemic was caused by the severe acute respiratory syndrome coronavirus 2 (SARS-CoV-2). This new coronavirus mostly causes asymptomatic or mild infection, but in a significant minority, it triggers a hyperinflammatory reaction that leads to serious or life-threatening illness. 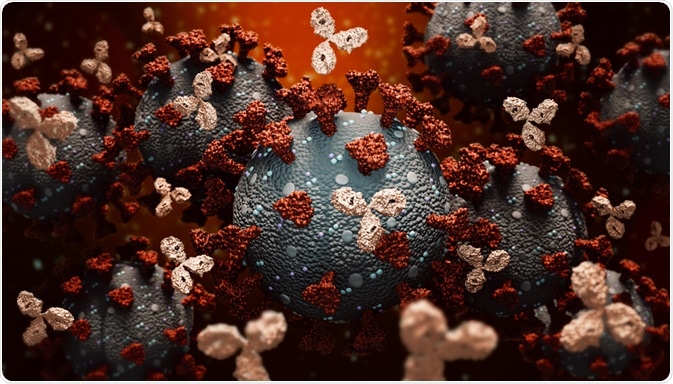 The nail protein mediates viral binding to the host cell receptor, the angiotensin-converting enzyme 2 (ACE2), and entry via viral cell membrane fusion or endocytosis. This occurs at the receptor binding domain (RBD), where the S1 domain of the tip protein engages the receptor. This binding leads to a massive conformational change in S2 to the post-fusion state of the protein.

Monoclonal antibodies (mAbs) are proteins formed against a foreign antigen. These are created by incubating immune cells with a specific viral protein to produce one specific antibody. The white cell is then cloned so that it can be a cell factory that secretes antibodies against the target pathogen.

Monoclonal antibodies (mAbs) directed against the tip protein have been shown to be clinically useful in the treatment of COVID-19. Currently, three mAbs have received Emergency Use Authorizations (EUAs) from the Food and Drug Administration (FDA).

It is important to remember that EUA does not mean FDA approval. The Covid-19 Treatment Guidelines Panel recommends using one of the following mAb cocktails to treat mild to moderate COVID-19 in patients who are not sick enough to require hospitalization but who have multiple risk factors for serious illness and hospitalization.

The EUA criteria have been extended to include patients with a body mass index (BMI) of 25 or above, pregnant patients and racial / ethnic factors. Also, patients with high-risk medical conditions such as sickle cell anemia, asthma-cardiovascular disease, and disorders of neurological development are now eligible for any age over 12 years.

However, not all such conditions have been tested in trials, so the strength of the evidence for their inclusion in the treatment criteria is low. In fact, the details of the method and design of these experiments have not yet been reviewed and further changes may occur once this is completed.

The mAbs in question are:

1) A cocktail of bamlanivimab plus etesevimab, neutralizing mAbs that recognize different epitopes that overlap in RBD. These are less effective at neutralizing the newer Beta and Gamma variants of the virus. Thus, their use is indicated where the incidence of such variants is low.

2) A cocktail of casirivimab plus imdevimab, recombinant human mAbs that engage distinct non-overlapping epitopes of RBD. This is given intravenously, but if this is not possible or would delay treatment, the dose is divided into four subcutaneous doses given at one time. This condition is due to the limited safety and impact data on this route.

3) Sotrovimab, first identified in a SARS-CoV patient who recovered from the infection but found itself in an epitope in SARS-CoV-2 RBD common to both viruses. Here, the relative risk reduction was 85% with an absolute risk reduction of 6%.

Recommendations include starting treatment as early as possible after a diagnosis of SARS-CoV-2 infection and no more than 10 days after symptom onset. Second, patients with mild to moderate COVID-19 should be treated with mAbs if the above criteria are met, even if the admission is admitted, as long as the admission is not related to the diagnosis COVID-19.

Third, these mAbs are not useful in the treatment of patients with severe COVID-19, such as those hospitalized with this condition, those who need to be on oxygen, or those who are already on oxygen who require increased flow rates due to the superimposed oxygen flow rate.

They can rarely be used if the patient is unable to seroconvert or is immunocompromised and is unlikely to respond robustly to the immune system. There is so far no evidence of their use in the latter environment.

Second, mAbs may be useful in preventing the spread of SARS-CoV-2 infection among household members, for example, or within a long-term care facility. The FDA has extended the EUA for the second cocktail for use in the prevention of infection in vulnerable individuals who have an increased risk of infection as well as disease progression.

The basis for this recommendation is the finding that mAbs reduced the risk of hospitalization and death when used in such patients, from randomized controlled trials. However, as these trials were conducted at a time when there were few variants of concern, further research is required to determine their usefulness in treating infections with these variants that may show partial resistance.

The alpha variant remains as susceptible to the wild-type virus. The beta and gamma variants are much less susceptible to casirivimab, bamlanivimab and etesevimab, but the combination of casirivimab plus imdevimab remains highly neutralizing, as does sotrovimab. Both of these variants contain the E484K mutation as well as the K417N / T, respectively.

The Delta variant contains the L452R mutation and is somewhat less susceptible to the bamlanivimab-etesevimab cocktail in vitro, and remains vulnerable to neutralization of sotrovimab and the combination casirivimab plus imdevimab.

The Epsilon and Iota variants show the same pattern, although the E484K mutation in the latter is associated with partial resistance to casirivimab in vitro.

With cocktail 1, the risk of hospitalization or death due to COVID-19 was 1%, compared with 3.2% in placebo. This corresponds to a 70% reduction in risk compared to the placebo group, but in absolute numbers the risk is low in both groups.

In the RECOVERY study, patients admitted with COVID-19 who did not seroconvert significantly benefited from the combination of casirivimab plus immevimab, with an absolute reduction of 6% in mortality (24% vs. 30% in the mAb and standard treatment groups, respectively) .

Reservations to this include the fact that this study used a higher dose of mAbs than used under the current EUA, which does not allow routine use of these drugs in inpatients with COVID-19; moreover, seroconversion is not routinely assessed at present due to the lack of rapid test resources.

The use of mAbs in children with COVID-19 who are not hospitalized but who have risk factors for disease progression is not supported by evidence, but either cocktail 1 or 2 can be used on a case-by-case basis if the EUA criteria are met.

The potential for interference with the immune response of passively administered mAbs has led to the advice to postpone COVID-19 vaccination for at least 90 days from the date of receipt of mAbs.

The adverse events reported in subjects receiving mAbs against SARS-CoV-2 include hypersensitivity reactions, including anaphylaxis and infusion reactions. Itching, dizziness and rash as well as gastrointestinal symptoms such as nausea and diarrhea may also occur.

No drugs are thought to interfere with these mAbs. In pregnant women, especially if they have risk factors for COVID-19 progression, mAbs should be used. The rationale for this guideline is the fact that immunoglobulin G (IgG) antibodies have been used during pregnancy in other contexts.

Space debris has forced NASA to temporarily suspend a spacewalk. So where did it come from? And why is it so big?