Skip to content
Heavy rainfall and flooding are forecast across New South Wales over the next eight days.

The Bureau of Meteorology (BoM) said there will be severe thunderstorms in some parts of the state, which could lead to flooding.

The storm will hit NSW tomorrow.

“Wednesday and Thursday will see the potential for severe thunderstorms through the western part of the state,” said meteorologist Hugh McDowell.

McDowell said tomorrow may be the wettest day recorded in parts of western NSW since September 2020.

The state can look up to a month of rain tomorrow.

The heavy rainfall could also lead to flooding in parts of NSW.

“Due to high levels of moisture in the atmosphere, there is an increased risk of heavy rainfall that will result in flooding and may result in some roads becoming blocked and inaccessible,” he said.

BoM has also warned that there may be harmful winds in western NSW tomorrow along with the heavy rainfall.

“Thunderstorms over the inland can again be potentially severe on Thursday,” Mr McDowell said.

The showers are expected to subside on the east coast on Friday, but further rain is expected on Sunday and Monday. 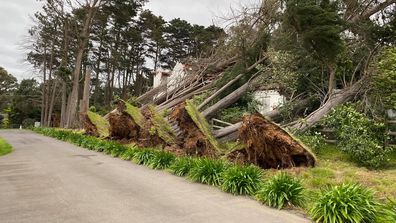 Trees pulled from the ground by strong winds in Melbourne

NSW residents are urged to prepare for the wild weather.