Skip to content
NEW YORK – The men and Michelle were still tumbling after Jamie’s big revelation that her character was being questioned, as was not the case at all. That was Jamie’s problem, and he used his insecurities to make her feel awful so he could figure out where she stood with Joe. The other men are trying to figure out who was talking to Michelle, they want to find out who the rat is.

The first date card read: “Martin, LT, Olu, Spencer, Clayton, Nayte, Joe, Rick, Will and Peter, I want a man who is not afraid of the danger zone.” You know, that briefly meant they had to fly into the danger zone – Top Gun! 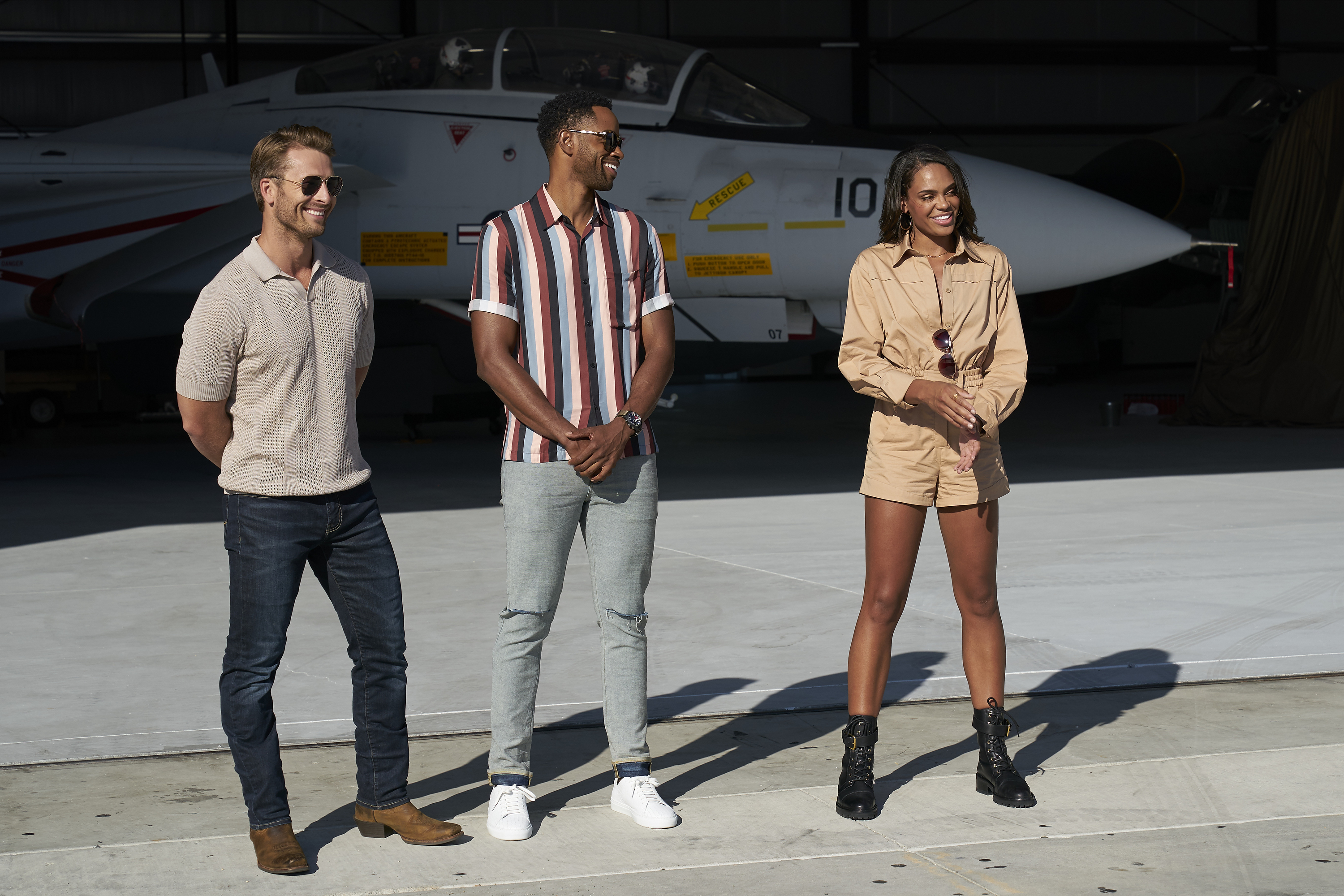 They went to the air museum and Michelle was waiting for them in a classic plane. Jay Ellis and Glen Powell were there to meet the guys as they star in “Top Gun: Maverick.” The guys had to go through some real training so Michelle could pick her “Maverick”. Little Willy, Frosted Tips, Dough Boy, were just a few of the calls that the men received from their fellow competitors. They did a physical workout and of course a G-force simulator. While the guys had to spin around, the guys had to tell Michelle how they felt about her. Will was already sick, just seeing the other guys go, but he seemed to be recovering. Peter spoke to her in Italian, and then Will did it in Spanish, and it did not go down well with Peter. He felt that Will was copying him. During a “dog fight” where the men fought each other gladiator style with the big padded sticks, Will just destroyed Peter. Eventually the winner was Little Willy, aka Will. That made Peter angry, and he called him a “pimple.” Michelle got to drive Will around in a vintage car used in “Top Gun: Maverick” as they got to know each other better. He also got a bomber jacket to win the challenge.

Later, the guys were happy to spend some time chatting with Michelle one-on-one during their cocktail party after the group date. Clayton complimented Michelle’s confidence, and she told him he already seemed more relaxed and confident. Then he asked her to spin around so she could experience a bit of G-force. That was sweet! Then they shared a kiss!

Michelle actually kissed a lot. Things also seemed to develop with Nayte and Joe, but in the background, Peter and Will continued to quarrel. Peter seemed to lose his voice, he talked and shouted so much. Martin used the distraction as a chance to grab Michelle to get their own special moment together. Michelle said she appreciated how he pulled her aside earlier to check on her and she went in to kiss!

Peter then got up and put on Will’s coat while Will talked to Michelle. He went to the swimming pool and threw it in! Oh my God. The other men could not believe he did. Will went back and asked where his coat was. The other men told him that Peter threw it into the water and they apologized for not stopping him. They encouraged Will to be the bigger man and say nothing. Will started crying and had to walk away. Clayton told Peter that it was not a good thing to do and that all their actions were affecting Michelle, and Peter told him to stay out of it.

Will remained silent as Michelle gave the group the computer rose to Martin. She told Martin she had something special for him and sent the rest of the men back to the hotel. They danced to a string orchestra playing “Take My Breath Away”, which of course is from “Top Gun”. When Michelle thanked her lucky stars for an evening without drama, Will fished his prize jacket up by the pool.

Rodney’s one-on-one date
The one-on-one date card read, “Rodney, Love is about letting go.” Rodney was so excited. He said he was on cloud nine. Michelle took Rodney into a kitchen at the hotel, where he was to feed her blindfolds. Then she had to feed him while she was still blindfolded and it got messy! Then they had to handcuff each other and work on opening some boxes to find the key. Then poor Rodney had to undress naked and run through the lobby while Michelle shouted through a megaphone “This is our journey!” Kaitlyn and Tayshia cheered Rodney while the other men came to the hotel balcony to watch him roam! Poor Rodney! He deserves a rose after that!

After all the daring, they went into a hotel room, where they relaxed on a bed and made the “Truth” part of the date. Rodney said his biggest fear is dying before he is able to become a husband and father. Michelle said she is afraid of being complacent and that is also her downfall because she is always focused on the next and does not enjoy the present. Rodney said nothing about Michelle is average, and so they kissed! Michelle said Rodney broke through the “friend zone” and moved on to the “relationship zone!”

Then they left the room and boarded a rowboat, where Rodney rowed them over to a dinner table outside on the other side of the water. Michelle said she loves how playful and funny Rodney is and she sees elements of her parents’ relationship in their relationship. That’s something she’s looking for. He talked about how he was raised by a single mother with his brother after their father left when he was six. But he said his mother showed him that with hard work and a good heart you can get through everything. He aims to make his mother proud! Michelle revealed that in her previous relationship with a person who was white when she was called the N-word by a woman in the grocery store, her boyfriend told her that she gave the woman power by choosing to be upset. She did not feel supported in the way she should have been because she had to justify her feelings. Rodney agreed with her that she should be able to feel how she wants it. Rodney! Where did you come from? Watch out for boys! Michelle gave him the date rose! This underdog is here to stay!

Group Date # 2
The second group date card arrived and read, “Jamie, Leroy, Chris G., Casey, Malik, Chris S., Brandon, and Romeo, I want a man who can express himself.” Rudy Francisco, a spoken word poet, was there to help the guys express themselves. Casey was losing his mind because he works as a motivational speaker and he is a hero to Casey. 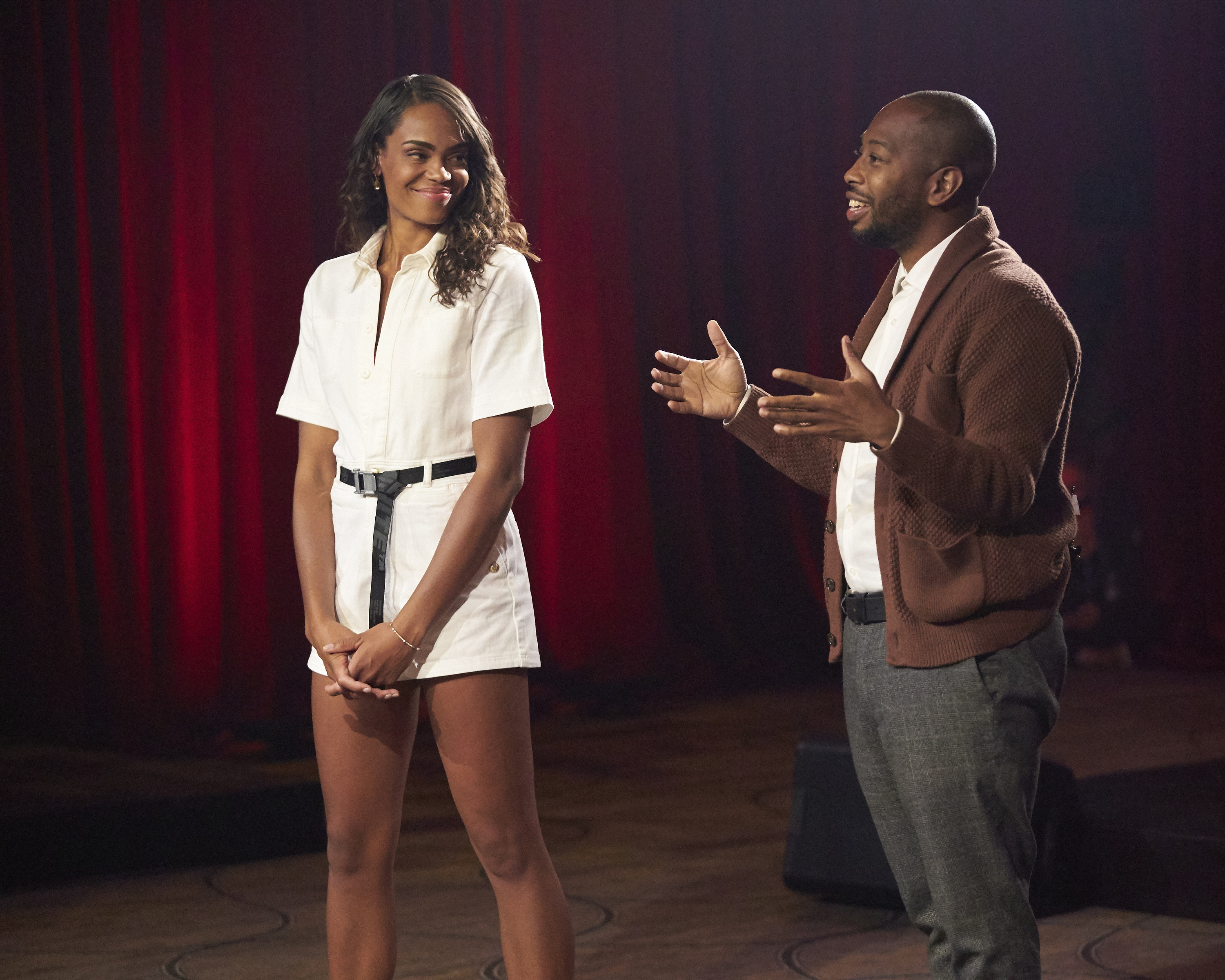 Michelle was blown backwards by all the men’s poems. But then Jamie told a parable … it was really weird. The guys thought he was not following the task and they thought it showed his confidence issues. Michelle also went up to the microphone and read a letter to her future soulmate. It was very heartfelt and she talked about not fitting in. She did not have many dates and talked about how she was chosen last for ball but first for basketball. The guys were really touched and touched by everything she had to say and could really see that she is genuine in wanting to find love.

During the cocktail party on the group date, Michelle and Brandon made a great connection. They spent a lot of time kissing. Michelle said her stomach rolled over with him as if she were on a roller coaster, and Brandon said he felt like he was falling in love with her. But he did not tell her yet!

Jamie told her he appreciated her story and he told her how he felt the same. Michelle said she appreciated that he told her that, and then she kissed him. Can’t she see that he would not say it in front of the others, as the rest of the guys did? Jamie thought he had the group date rose in the bag. But she gave it to Brandon! Burn! Jamie burned and pulled a producer aside. He found it insulting that he was in the same consideration as Brandon and said, “I thought it would be a stronger group of guys.” And said Michelle was in “Spring break mode.” Wow, he’s so insulting. The more he moves his mouth, the less I like the guy. “I will not judge it, but that does not mean I can not make fun of it,” he said. Ick.

Cocktail party
Michelle looked amazing as her gold dress, and Nayte wasted no time in asking her to speak. He said he wished they could run away and Michelle took off her shoes and they started running! They ran into the darkness on the resort grounds and they talked about how they mutually trusted each other and they kissed.

Meanwhile, Casey began to stir in the pot to see if he could figure out who was telling Michelle that the guys were questioning her integrity. Rick used his time to tell Michelle that the other guys did not question her character and that he is sure of it after talking to the men this week. He said the guy was not honest and probably did it to try to win her trust and throw others under the bus. She revealed to Rick that it was Jamie who said it to her. Michelle said she now sees a red flag with Jamie.

Rick went back to the other guys and revealed that the rat was Jamie. Nayte encouraged Rick and Casey to get Jamie involved in the conversation so they didn’t just talk about him behind his back. Jamie stumbled around, saying that the house was talking about the speculations about Michelle and Joe, and that it was creating a character in the room. Nayte said, um no, no one talked about it. The other guys backed Nayte up. Nayte shut down for every comment Jamie said, calling the false truths. Meanwhile, Michelle talked to Tayshia and Kaitlyn about the situation.

Michelle came back into the men’s room and said, “What’s up with this strange mood?” Jamie spoke up and tried to explain himself. Michelle backed the conversation up to the words they had about her previous relationship, or actually lack thereof, in Minnesota. Then she talked about how he paired it with men talking about her and Joe knowing each other from before the show. He was trying to make it seem like he was preventing gossip when he really started it all.

She asked Jamie to speak outside and you knew it would not be a good conversation. She said the trust between them was broken because he created drama with inaccurate information. He did not protect her, he created a situation that was potentially detrimental to her experience as “The Bachelorette.” She expressed that she was hurt and needed to end things with him. He said, “OK.” Goodbye, Jamie.

That meant Peter and his temper were sent to pack along with a couple of other men who didn’t get much airtime. They all went graciously.

Next week
Michelle gets worried that she will commit to someone who “doesn’t see” her. Chris S. tells her in front of the group, “There are guys here who think they have it in the bag.” Yikes! Nayte is ready to shut that situation down!

READ ALSO: Meet the 30 men vying for Michelle Young’s heart on ‘The Bachelorette’