Boris Johnson tells us we can have it all.

In his government’s net zero documents released last month, the British Prime Minister says there will be “good jobs, green jobs [and] well-paid jobs “without sacrifices because the government wants to” make carbon-free alternatives cheaper “while the nation” builds[s] back greener ”.

Johnson’s views are in contrast to the government’s independent climate adviser, the Climate Change Committee, which estimates that eliminating net greenhouse gas emissions from the UK will come with a bill of £ 1.4tn by 2050.

That equates to an average of £ 1,700 a year for each household, and it comes on top of £ 3,000 in non-climate-related tax increases, which the Boris Johnson government has also imposed over the next few years.

Who is right? What are the best estimates of the cost of reaching net zero? Who is going to pay? And what benefits would Britain get from meeting its climate goals?

What is the gross cost of reaching net zero?

This is the figure of 1.4 billion pounds. It was calculated by the Office for Budget Responsibility by adding together annual investments that the Climate Change Committee estimated were necessary between 2020 and 2050 for the UK to reach domestically produced net zero emissions.

The CCC estimates that green investment will increase rapidly in the 2020s to around £ 50 billion a year in real terms – more than 2 per cent of Britain’s gross domestic product.

A huge expansion of offshore wind to both replace gas-fired power plants and to expand the necessary capacity for the extra power for electric cars and heat is the biggest part of the bill. Changing home heating to be CO2-neutral, either through heat pumps along with insulation and new radiators or hydrogen technology, is another huge cost. Higher cost of capital for electric cars and vans and zero-emission trucks will also require significant investment.

Many analysts doubt whether the government is willing to pass laws to mandate these investments. Andrew Brigden, chief economist at Fathom Consulting, said: “Politicians fear the election consequences of higher cost of living caused by climate action, and this raises doubts about the political viability of carbon taxes and regulations to help make net zero targets a reality.”

What about the net cost?

Better insulation requires less heating, installing solar panels on the roofs reduces the electricity that households have to buy, and electric cars are more efficient at converting energy into electricity and have lower maintenance costs.

The CCC estimates that households will eventually win £ 1tn by 2050 in lower operating costs if the necessary investments are made, leaving net costs of around 0.6 per cent of gross domestic product per year. That’s about £ 12 billion a year, or just over £ 400 on average for each household a year.

Mike Thompson, chief economist at CCC, said: “Just over half a percent of GDP distributed across the economy is so small in things that it would not be noticed.”

As the CCC’s estimate compares favorably with the impact of Brexit, which is expected to cost the nation about 4 percent of GDP, and coronavirus 2 percent, Thompson added, “It’s a pretty good deal to avoid the effects of climate change.”

However, in order to optimize the long-term gains, households must be able to afford the upfront costs.

The CCC net figures take into account the fact that as Britain removes carbon, the Treasury will lose £ 30 billion a year in petrol and diesel taxes. They exclude both the household gain by not paying these taxes as part of the set-off and the probable imposition of alternative taxes or traffic taxes, which the Treasury has in mind.

However, not everyone is convinced with CCC’s relatively low net cost estimates. Sir Dieter Helm, professor of energy policy at Oxford University, said the estimates were “both sincere and dangerous” because they ignore carbon emissions embedded in Britain’s huge import level, much of which is still made using coal. It also presupposes that the government will not make mistakes and back the right horses all the way back to net zero.

The UK’s record of reducing overall carbon consumption is far from as successful as its reduction in domestically produced emissions, Helm noted, and is “a really good example to the rest of the world of the dangers of one-sided carbon production targets and negligible carbon consumption. ”.

Who is going to pay? Government, companies or households?

Just as taxes are ultimately always paid by households, so are the costs of decarbonization. Governments can pay for infrastructure and then charge households in higher taxes or regulated prices for energy networks. And companies can give the money to investments, financed from banks or investors, but they expect to see a financial return from households paying to use the new assets.

The good news is that the economy must be there as long as the government sets the rules of the game to prevent people from cheating and continuing as normal.

Mark Carney, former governor of the Bank of England, was aware that finance can only always be a facilitator and not pay for net zero. “Finance never acts in isolation,” he wrote in the Financial Times. “Governments must support their net zero commitments with clear, credible and concrete policies.”

What about the benefits?

The main advantage of the UK’s net zero target is that the country plays a role in reducing the risk of global warming. As OBR wrote this summer: “Unsustained global warming has the capacity to deliver catastrophic changes to life and livelihoods.”

But as global emissions continue to rise, British action will have a negligible effect on the world’s climate. Environmental economists are now emphasizing other potential benefits of the net zero target to offset the inevitable economic costs. 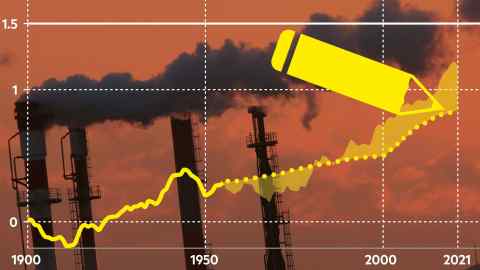 Professor Lord Nicholas Stern, of the London School of Economics and author of the Stern Review on Climate Change 15 years ago, said the economy should recognize that in the future it is unlikely that there will be a long-term growth history that is low in carbon. nations would likely generate higher living standards the earlier they adopt green technology.