Recent attention has focused on how human astronauts will set foot on our nearest neighbor, Mars. A major concern is the type and amount of fuel that will be needed to transport humans and goods to the surface of Mars and get astronauts back to Earth safely. A study published in the journal Nature communication has unveiled a new process for producing rocket propellant using biotechnology, providing an innovative approach to one of the largest roadblocks for Mars exploration.

Setting foot on Mars: Our next step in space exploration

The success of several projects on Mars, such as NASA’s Perseverance, has proven that the age of Mars exploration is approaching. In the not too distant future, humanity will set foot on Martian soil and herald a new era in the exploration of our solar system.

However, there are several major challenges to the efforts of international space organizations and private companies. First and foremost, it’s designing the technology that will get humans and equipment to Mars and, above all, return the astronauts safely home, so it’s not a single trip. Several technologies are already under development, including heavy-lift rockets and the Orion spacecraft. 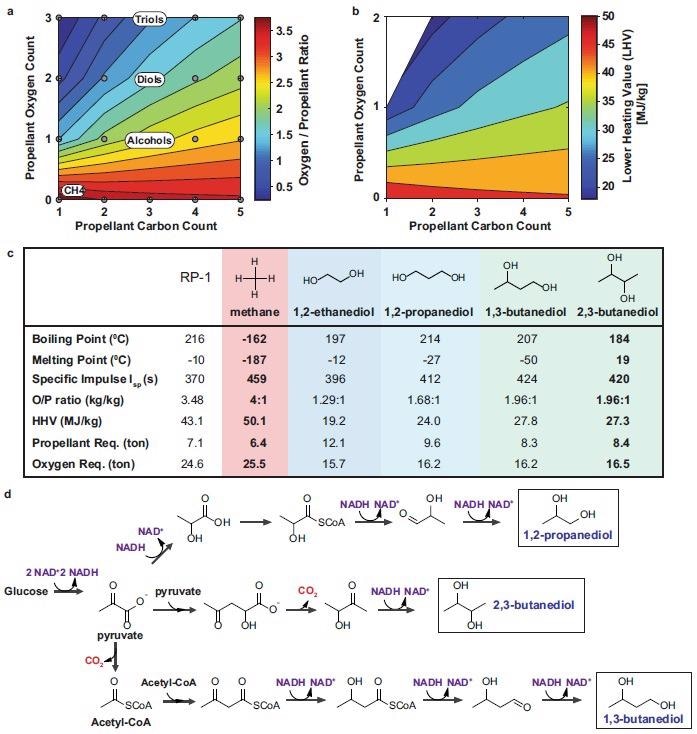 Transporting the payload of fuel needed for the safe return of humans from Mars is a huge logistical task and would prove difficult as it would require huge rockets or storage space infrastructure that would be prohibitive expensive. It is estimated that the approximately 30 tons of liquid oxygen and methane required just for the launch of a manned aircraft (MAV) in orbit around low Mars will cost $ 8 billion and require an initial payload of 500 tons for a mission alone. .

Now a team of scientists has presented a method to manufacture vital propellant for the journey home in situ on Mars itself using biotechnology. This research aims to provide several important advantages over other proposed methods of producing Mars rocket propellant. It is hoped that large-scale production of biological fuel will become a key technology for future Mars exploration missions.

Developing an in-situ rocket fuel production method on the surface of Mars has several benefits: In addition to reducing the initial payload requirements for Mars missions, it will reduce the mass of the Mars lander and solve the safety problems of transporting abundant amounts of rocket fuel. . 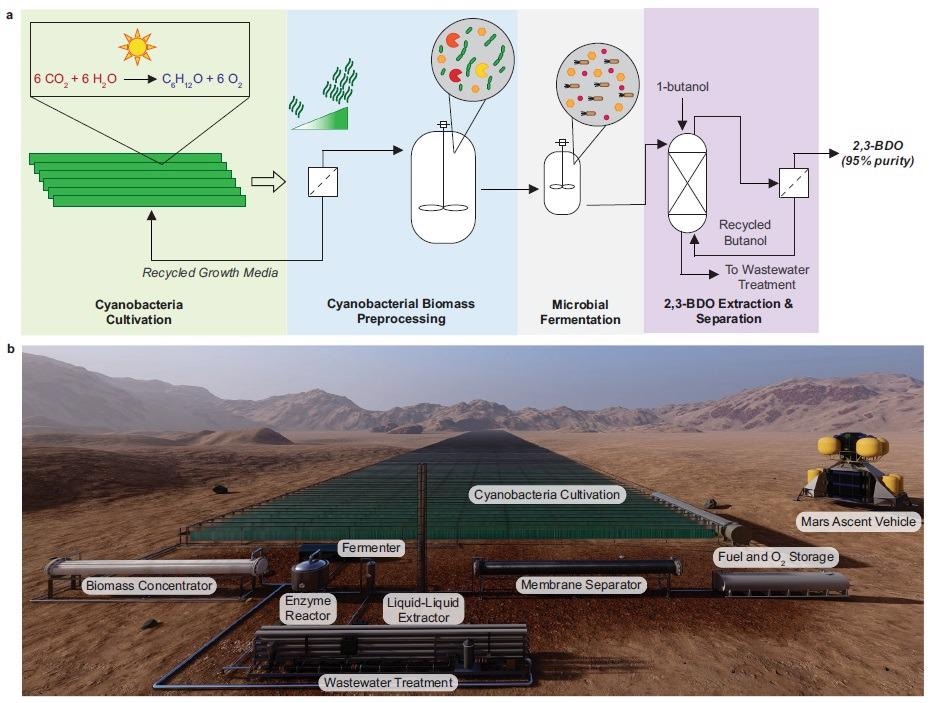 Continuous bio-ISRU production of 2,3-BDO on Mars. a Bio-ISRU production of 2,3-BDO is composed of four modules: (1) Cyanobacterial culture in photobioreactors or biofilm growth (shaded green), (2) Cyanobacteria biomass pretreatment composed of biomass concentration via membrane filtration and enzymatic digestion in a stirred tank (shaded blue), (3) Microbial fermentation of the cyanobacterial glucose to produce 2,3-BDO (shaded gray), (4) 2,3-BDO extraction and separation via sequential liquid-liquid extraction and membrane separation to achieve 95% purity (colored purple). Chemical formula: Red Mars resources. Blue chemicals made on Mars. b A rendering of what the bio-ISRU for the 2,3-BDO process might look like on Mars, with a Mars Ascent Vehicle included to scale. The cyanobacterial culture module makes up the majority of the material and the soil’s footprints. Image credit: Kruyer, NS et al., Nature Communications

Methane is an alternative to traditional rocket fuel due to its specific impulse and favorable calorific value. Specific impulse is a measure of rocket performance per. unit of propellant mass. Strategies proposed for producing methane in-situ include transporting methane from Earth and producing O2 on Mars via solid oxygen CO2 electrolysis or transport of hydrogen from the Earth, which would require even larger payload systems than are currently in use.

Use of biotechnology to produce a Mars-specific rocket-making technique

By developing a biotechnology-enabled Mars-based method, the specific conditions on the planet can be exploited. These include low density, elevated CO2 levels, sunlight and plenty of water. Biological systems convert inorganic atmospheric CO2 for usable oxygen and organic compounds. Mars’ atmosphere contains 95% CO2, making it 20 times as abundant as on Earth.

The research, published in 2021, proposed a microbially activated strategy to produce 2,3-BDO (2,3-butanediol) from sunlight, carbon dioxide and water found on Mars. The continuous process involves two common bacteria in biotechnology: cyanobacteria and a genetically engineered strain of E coli. The cyanobacteria digest Martian CO2 to create nutrients, which are then converted into fuel by E coli. The main limitations of the process are the levels of Mars sunlight and water.

Some important benefits of the technology

Refining the process is expected to have some important advantages over an O2 with strategy. Using existing technologies, this method will require a three times higher payload, but produces excess oxygen, which can be used for other missions or for residential areas on a Mars mission.

Full process measurements for bio-ISRU production of 2,3-BDO. -one Water consumption, b power requirements, and c payload mass, which accounts for all unit operations in bio-ISRU for 2,3-BDO production using either biobeGrowth modes for lm or suspended cyanobacteria. The results are based on 10 tons of 2,3-BDO produced over 500 suns. Chemical ISRU (DRA 5.0 O2 only strategy) shown in gray. Source data is provided as a source data file. Image credit: Kruyer, NS et al., Nature Communications

Landing humans on Mars and returning them home will require innovative approaches like the one described in this research paper. Although major challenges exist in biology and materials, this microbially enabled in-situ propellant production process may be the key to truly sustainable Mars exploration and future colonization efforts.

Disclaimer: The views expressed here are those of the author in their private capacity and do not necessarily represent the views of AZoM.com Limited T / A AZoNetwork, the owner and operator of this website. This disclaimer is part of the terms and conditions of use of this website.