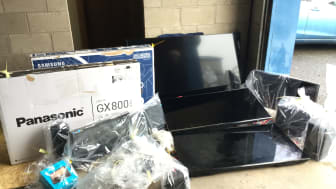 A man from Prestwich, who continued to cause noise nuisance to his neighbors, has been fined and had his equipment permanently confiscated.

Lawrence Huller, 50, of Eastleigh Road, pleaded guilty to several counts of non-compliance with a noise reduction notice issued under the Environmental Protection Act 1990.

The council had first given Huller a reduction notice in October 2019 following complaints about persistent noise from loud televisions and amplified music. Huller continued to cause disruption, and on October 13, 2020, the city council seized his equipment for a period of 28 days before Huller paid to have it returned.

The noise continued, and on March 8, 2021, the municipality seized 16 items, including six large televisions. On this occasion, the equipment was retained by the council and an application was submitted to the courts to confiscate the equipment permanently.

Huller was fined £ 900 by Manchester and Salford Magistrates Court and ordered to pay £ 1,400 costs and a £ 60 bid. Magistrates also gave the council a forfeiture order for all the items seized from Huller’s property on March 8, valued at £ 3,500.

“This was a long and complicated investigation carried out during the height of the Covid epidemic, at a time when residents were under extra stress due to lockdown.

“The council takes complaints about noise nuisance very seriously and we will continue to take action against those who ignore the warnings and harass their neighbors.”