An Oxford University College is to change its name after a multi-million pound gift from a Vietnamese conglomerate.

Linacre College has signed a memorandum of understanding with the Sovico Group, represented by its chairman, Nguyen Thi Phuong Thao, to receive a philanthropic donation of £ 155 million.

The college said it would approach the private council to ask permission to change its name to Thao College after the first installment of £ 50 million. 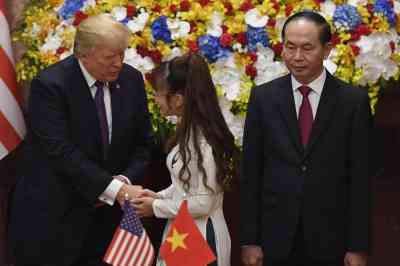 Nguyen Thi Phuong Thao meets Donald Trump in 2017 at a summit in Hanoi with Tran Dai Quang, the then Vietnamese president

However, the name change has been criticized by academics, who said they had reservations about the “commercialization” of entire colleges.

Graduate College, founded in 1962, is named after the Renaissance humanist, medical scientist and classicist Thomas Linacre.