Nvidia (NASDAQ: NVDA) stock has had a legendary run over the past decade. Its price has risen by an astonishing 663%, 1,150% and 7,940% over the last three, five and 10 years respectively. Started in 1993 by Jensen Huang, Nvidia began in PC graphics and changed the world when it introduced the graphics processor unit (GPU) in 1999. Huang still leads Nvidia, and the company is as impressive as ever.

With its sharp rise over the past decade and a market value of more than $ 750 billion, have investors missed the boat by taking advantage of Nvidia’s growth? Let’s take a closer look and see if we can find the answer. 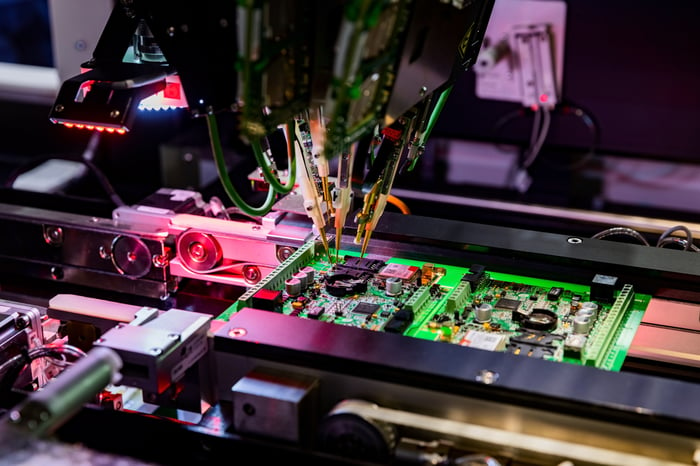 The many uses for GPUs

GPUs were originally designed to speed up 3D graphics processing. However, these semiconductor chips eventually found other uses, such as serving as the backbone of data centers and artificial intelligence (AI) applications because of their incredible computing power. Nvidia competes with Advanced micro-devices in creating the most powerful GPUs, but Nvidia is running away with the title. Just check out any “best gaming PC GPU” list and it will be filled with various Nvidia models.

The TOP500 project demonstrates Nvidia’s dominance and ranks “the world’s 500 most powerful computer systems.” Nvidia’s technology drives more than 70% of them and is used in 90% of the new ones being built. This industry dominance shows how far Nvidia is ahead of its competitors.

GPU usage is only increasing. Data centers can increase their speed while using less power with Nvidia’s GPU acceleration. Engineering simulations like those run using software maker ANSYS products are powered by GPUs and are used to design the next generation of products. An investment in Nvidia is a bet on technological advancement.

Nvidia Agreed to Buy Semiconductor and Software Design Company ARM for $ 40 Billion SoftBank back in 2020, but regulators are still investigating the antitrust compliance agreement. The target for the closing date is March 2022, but Huang believes it may even be later before regulators give it OK. This huge deal would combine ARM’s CPU processors with Nvidia’s GPUs, giving Nvidia a significant grip on all electronic consumers, which is why regulators are assessing the deal intensely. Should the agreement go through, ARM would have access to Nvidia’s enormous research and development opportunities. In the acquisition announcement, Huang said: “Our combination will create a company that is fabulously positioned for the AI ​​age.”

The applications for Nvidia are almost limitless and it is working on integrating its products in many exciting areas.

Nvidia presented spectacular growth figures over its last quarter despite how big it is. Revenue was $ 7.1 billion, a 50% increase, bringing the last 12-month revenue to $ 24.3 billion. For a hardware company, its gross margin is an astounding 65%. This allows it to produce huge amounts of cash because it has more than enough to cover expenses. Nvidia converted 18% of sales to free cash flow, adding to its already large $ 19.3 billion cash stock.

Dividing the revenue into segments shows how diversified Nvidia is.

The fastest growing segment – professional visualization – focuses on applications such as technology, media creation and Nvidia’s omniverse. The universe is similar to the meta-verse, but for professionals. It allows visualizations of 3D workflows, such as fabrication, architecture modeling, and video game creation. Over 700 companies have evaluated this product in its open beta phase, and 70,000 people have already downloaded it. Although it is a small segment, its growth potential is exciting.

Is it too expensive?

Buying a stock that performs well is smart, but only if it can be bought at the right price. 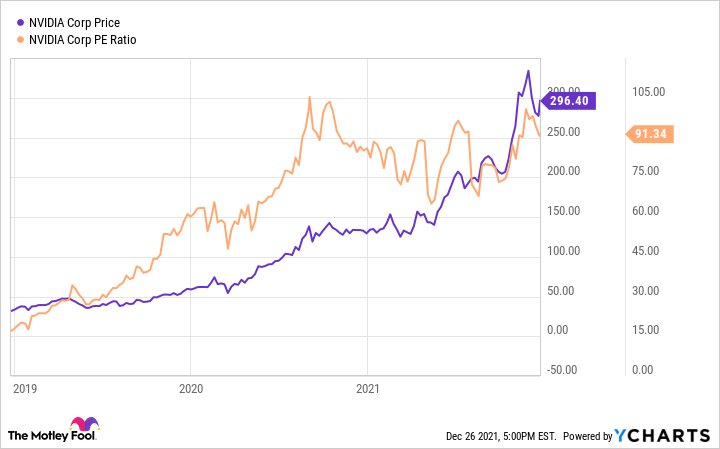 Nvidia’s price-to-earnings (P / E) ratio has risen along with the price, meaning that most of its gains were generated by multiple expansions. This happens when the market believes that a stock should be valued higher because of its execution or market opportunity. However, its valuation reached the 75-to-90 P / E range in mid-2020 and has not fluctuated much beyond that, although the stock price rose, meaning earnings rose to reflect the price change.

For a company with strong execution and growth prospects like Nvidia, I think today’s price is very expensive, but it’s still OK to buy if your time horizons are set appropriately. Moreover, Nvidia is practically a deserved monopoly. While there are alternatives, Nvidia is the best, and an upstart would take years to achieve what Nvidia has done. Nvidia’s growth prospects span many decades, so investors should hold the stock for at least five years to allow the company to execute some of its vision. The stock price has fallen about 10% over the last few weeks, so it can be a great buying opportunity for this growing company.

This article represents the opinion of the author, who may disagree with the “official” recommendation position for a Motley Fool premium advisory service. We are motley! Questioning an investment dissertation – even one of our own – helps us all think critically about investing and make decisions that help us become wiser, happier and richer.