A man has died after getting out of his vehicle during a traffic stop in Silver Spring, Maryland, and opened fire on officers, police said.

A man has died after getting out of his vehicle during a traffic stop in Silver Spring, Maryland, and opened fire on officers Wednesday morning, police said.

Montgomery County police officers stopped the vehicle at the intersection of Wayne Avenue and Dartmouth Avenue because it matched the description they had from a officer on duty for a vehicle and suspect searched in a 4:15 am shooting of a man in the 900 block of Bonifant Street. The officer heard the shots on Bonifant Street, responded and passed on the information about the suspect and the vehicle to officers on duty.

“Officers followed the white Mercedes Benz on Wayne Avenue, stopping at Wayne and Dartmouth Street. At one point, a person left the vehicle with a gun and started firing at the officers who had stopped the vehicle. The officers returned fire. The person , who shot at officers, was hit and succumbed to his injuries as a result of being shot, Montgomery County Police Chief Marcus Jones said during a morning press conference.

The intersection of Wayne Avenue and Dartmouth Avenue is half a mile from Bonifant Street.

None of the four officers involved were injured.

“The four officers involved in this have all been put on administrative leave, awaiting the outcome of this investigation,” Jones said.

Jones said it is not known how many officers fired shots and that they did not yet have information on where the bullet or bullets hit the suspect.

The victim of the Bonifant Street shooting has been admitted to hospital. Jones said the victim and the suspect knew each other.

The identity of the killed man has not yet been released.

Montgomery County police are continuing to investigate what happened on Bonifant Street, but state law is investigating the fatal, police-involved shooting by the Maryland Office of the Attorney General’s Independent Investigation Division.

“Currently, we have our on-site investigators along with our technicians at the crime scene, who are with Maryland State Police and are collecting evidence,” said Thomas Lester, a spokesman for the Maryland Office of the Attorney General’s Independent Investigation Division.

The investigation will also review body camera footage from officers. 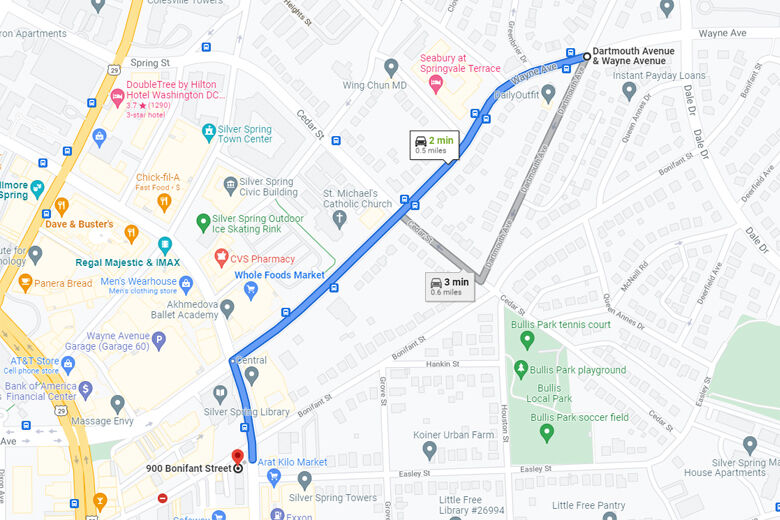 Here’s a map of where the two shootings in Silver Spring took place. (Courtesy of Google)

Get the latest news and daily headlines delivered to your inbox by signing up here.

© 2021 WTOP. All rights reserved. This website is not intended for users within the European Economic Area.