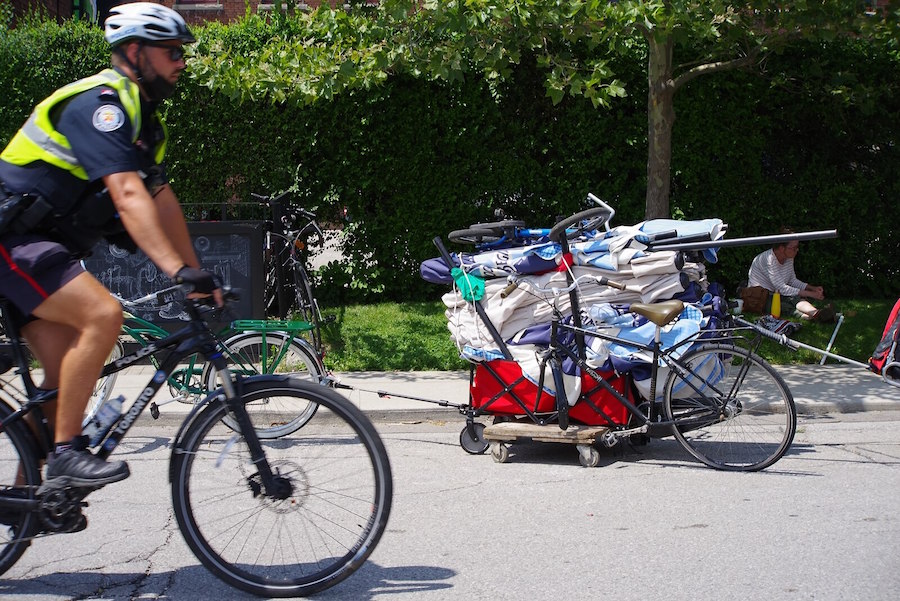 The Omicron variant has arrived in Canada and has rapidly increased infections. But once again, people experiencing homelessness are being left behind.

Even in the face of the harsh reality of cold winter temperatures, they are uniquely vulnerable to the spread of this highly contagious virus.

We already know that the most vulnerable among us faced higher rates of infection and death as they were moved into assembly environments during previous waves of the pandemic and were further displaced as police and statutory officers considered them intrusive and destroyed their camps. We must not repeat these human rights violations during the Omicron wave. As governments take decisive steps to keep people safe, cities must immediately implement a human rights approach to tent camps.

The recently released report, Trespassing on the Right to Housing, reviews the city of Toronto’s approach to camps during the first three waves of the pandemic. It found that the pandemic exacerbated the city’s housing and homelessness crisis. Already inadequate shelter sites and deteriorating conditions were exacerbated by the spread of COVID-19 in assembly environments. Despite this, Toronto has continued to apply policies, programs, and bylaws that criminalize, punish, and displace homeless people. A new approach to campsites is both urgent and necessary to live up to the municipality’s human rights obligations.

The report notes Toronto’s positive efforts to implement a pilot project in the Dufferin Grove camp this fall, emphasizing meaningful commitment and a path to permanent housing. It also recognizes the difficult choices city officials have to make, especially during a pandemic. Still, Toronto has chosen to implement policies that have facilitated violence, criminalization, and punishment of camp residents and their attorneys. In fact, it spent nearly $ 2 million on violently evicting residents from just three camps, few of which have ended up in permanent residence or even indoors.

Toronto’s emphasis on deportations, arrests and harassment exposes the municipality to lawsuits and undermines the possibility of meaningful engagement and relationship building with the camp residents – the core of a human rights approach. It also calls into question its commitment to uphold the rights of indigenous and racialized people, who are disproportionately represented in camps.

It is quite clear that Toronto’s approach does not work. This applies to other cities that have adopted similar policies. It has not prevented camps from spreading. It does not provide people with housing. People live in camps because they do not have safe alternatives.

Toronto and other cities can and should make different decisions. It must take concrete steps. Many can be implemented in the immediate and short term: a ban on the postponement of camps; meaningful consultation with camp residents; collaboration with indigenous peoples and partners; to provide supports such as heating, water and sanitation; and the introduction of a system for navigating permanent housing options that meet the individual needs of campers.

In the long run, Toronto should repeal statutes that have criminalized and punished people experiencing homelessness, and commit to a comprehensive socially and economically affordable rental housing market with intergovernmental partners. Toronto must also renew its commitment to a Housing First approach rather than relying on the shelter system.

Toronto, and all cities, must meet their legal obligations and live up to the important obligation to all residents, housed and homeless, to realize the right to housing.

When faced with yet another COVID-19 wave, we must respond with respect and compassion, not violate orders and violence. After all, are we not all in this?

Estair Van Wagner is an associate professor at Osgoode Hall Law School. Alexandra Flynn is an Assistant Professor at the University of British Columbia’s Peter A. Allard School of Law. They are co-authors, along with Kaitlin Schwan, of Trespassing on the Right To Housing.