Skip to content
An adorable pygmy hippopotamus calf died at Sydney Taronga Zoo after just one month in the world.

The zoo announced the death Wednesday night and said the calf – whose name, Amara, was to be revealed soon – died suddenly Friday afternoon.

“The ‘little watermelon on its legs’, as she was affectionately known, was born in late November and captured the hearts of both guests and users in a relatively short time,” the zoo said on social media.

“She was found out reacting on Christmas Eve afternoon and was sadly confirmed departed at death.

“Preliminary results from Taronga’s veterinary team indicate a potential problem with her heart.”

Veterinarians are still examining and keeping a close eye on the calf’s parents, Kambri and Fergus.

The zoo said there were “no signs of trauma or mishaps.”

“She was a much-loved member of the Taronga family, and her passing is understandably heartbreaking for all those who knew and cared for her,” it read.

Pygmy Hippopotamus, Cambris second, had made her public debut just 20 days ago when she looked tiny while splashing around in the water with her mother.

“Kambri is an excellent mother. She is extremely motherly and very protective, and our calf becomes more confident every day, becomes more energetic every day. 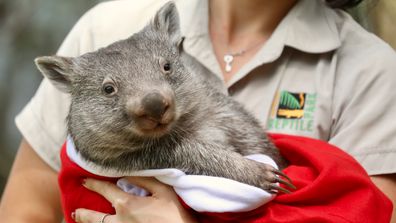 “In the beginning, she slept most of the day – slept and ate like any newborn baby, but now she’s exploring her surroundings, and today she looks really good at her exhibit.”

Ms Moss said there were fewer than 3,000 pygmy hippos left in the wild, making births at the zoo “extremely valuable”.