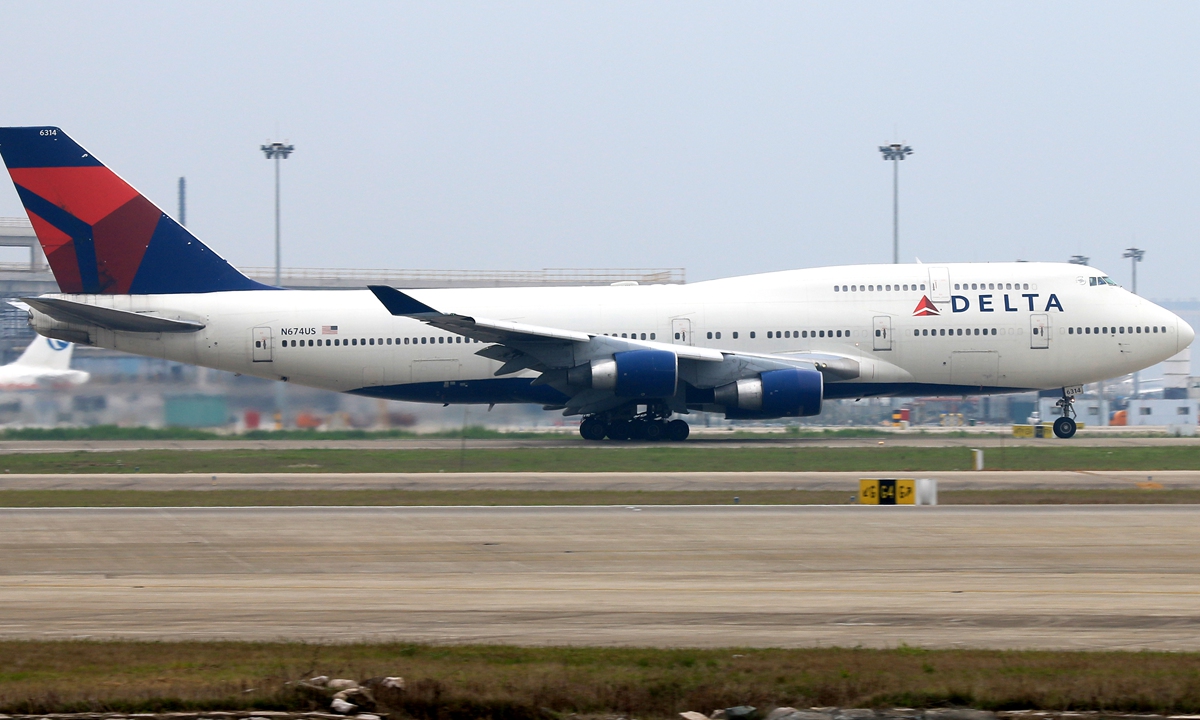 Many domestic and international flights in the US have been canceled due to staff shortages, and recent reports that the turnaround in the flight of Delta Air Lines’ flight DL287 from Seattle to Shanghai was due to China’s entry ban did not agree with the facts, says the Chinese embassy. in the United States said Tuesday.

Delta Air Lines’ flight DL287 from Seattle to Shanghai returned midway on December 22, and in a statement Monday, the company said new pandemic-related disinfection requirements at Shanghai airport were behind the move, USA Today reported.

However, the Chinese Embassy in the United States said in a statement Tuesday that the allegation that the DL287’s turn was due to China denying access to the flight, which the media quoted some crew members as saying, does not agree with the facts, and that recently many US airlines have encountered staff shortages.

Chinese passengers on board the plane suffered heavy losses as a result of the sudden turn of the plane. The embassy assists passengers and made solemn declarations to Delta Air Lines to urge it to protect the interests of passengers.

In response to the Global Times’ question about the incident, Delta reiterated its earlier statement, saying the flight was returned due to new pandemic-related cleaning procedures required at Shanghai Pudong International Airport.

It added that the procedures announced by the Chinese government on December 21 significantly extended the earth’s time and were not operationally viable for the company.

However, a leader from Shanghai Pudong International Airport said earlier that the plane neither landed at the airport nor entered Chinese airspace. The leader said they did not know what “specific effect” China’s anti-pandemic policy has caused on the flight.

An analyst from the civil aviation industry also told the Global Times earlier that the turnaround in the air may have been due to the lack of crew members, which is a widespread problem for many U.S. airlines.

“With departure from Seattle, the aircraft was required to land in Seoul for transit and a crew change before arriving in Shanghai, as each group of crew members has a required working time.”

“Flight DL287 may have had to return in the air if there were no crew members available in Seoul,” the analyst said.

Delta has been preparing two sets of flight crews in Seoul for each flight from the US to China since the pandemic, one working under the section from the US to Seoul and the other working from Seoul to China and back to Seoul, said staff at Delta Air Lines, as quoted by caixin.com.

The Chinese Consulate General in San Francisco on Sunday made a solemn representation to Delta after its DL287 plane unexpectedly returned to the United States halfway, leaving several Chinese on board nowhere to go with expired visas and health codes.

Most of the passengers were Chinese nationals, and those with F1 visas and tourist visas have been caught at the airport as their return trip to the United States was illegal, according to passengers reached by the Global Times.

Runtu (pseudonym), a passenger on plane DL287, told the Global Times that the plane was scheduled to depart on the night of December 21, but the captain said a passenger was not well and that the plane would take off after the passenger’s luggage had been unloaded. .

All the passengers got off the plane and were put into a hotel. At 10 pm (local time) on December 22, the plane finally took off. But after a six-hour flight when the plane was over Russia, the captain noted that they had to return to Seattle because of China’s new epidemic prevention policy, Runtu said.

While Runtu had returned to the city where she lived in the United States, many other passengers on the plane were still at Seattle airport, paying to stay in hotels themselves.

Runtu said Delta’s move to blame China’s preventive measures is disrespectful and tarnished against China. Runtu said an employee who worked at Seattle airport admitted to her that they heard about China’s demands for a three-hour disinfection of planes that arrived in China on December 21, meaning Delta already knew that the crew members might have to work overtime due to the changes.

Runtu said Delta could have canceled the flight in advance, instead of flying for hours and returning midway. Runtu said the captain claimed the turnaround was due to China not accepting passengers’ health codes under China’s new epidemic prevention measures.

“Delta declined my request for a refund via email,” Runtu said.

According to the flight tracking site FlightAware, several flights from the US to China have been delayed or canceled. CNN reported on Saturday that United Airlines canceled some flights because the nationwide increase in Omicron cases had a direct impact on flight crews and people operating the operations.