An exercise ‘sweet spot’ found to reverse cognitive decline in mice could one day be used to help people living with dementia, a new study suggests.

In experiments on aging mice, Australian researchers found that training for 35 days in a row was the ‘sweet spot’ to reverse the learning deficit in mice aged 24 months.

Oddly enough, the researchers found that longer or shorter training periods were ineffective in reversing this cognitive decline. 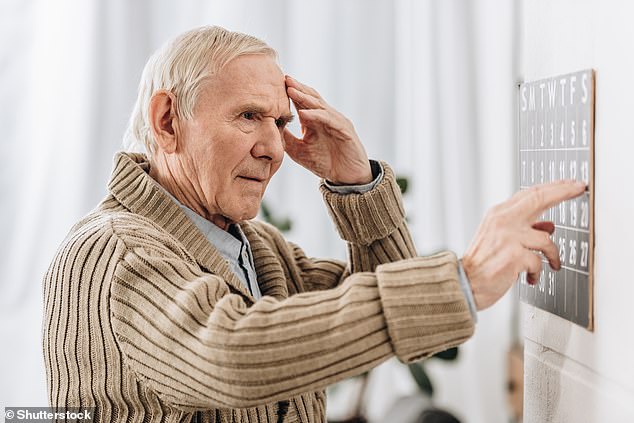 University of Queensland researchers have discovered an exercise “sweet spot” that reverses the cognitive decline in aging mice, paving the way for human studies. Worldwide, about 55 million people have dementia, including Alzheimer’s (stock image)

Dementia is an umbrella term used to describe a category of symptoms characterized by behavioral changes and gradually declining cognitive and social abilities.

Alzheimer’s is the most common cause of dementia, but other dementia conditions include vascular dementia, Lewy body dementia and frontotemporal dementia.

Alzheimer’s disease is thought to be caused by the abnormal buildup of proteins in and around brain cells.

According to predictions from Alzheimer’s Research UK, one million people in the country will have dementia by 2025, doubling to two million by 2050.

Worldwide, about 55 million people have dementia, including, but not limited to, Alzheimer’s disease.

The new study was led by researchers at the Queensland Brain Institute (QBI), University of Queensland, Australia.

Dementia is caused by damage or loss of nerve cells (also known as neurons) and their connections in the brain.

These nerve cells carry electrical impulses from one place to another and transmit information through electrical and chemical signals.

The growth of new neurons – known as neurogenesis – is crucial in areas of the brain to maintain cognitive abilities, including the hippocampus, a seahorse-shaped brain region responsible for learning, emotion, and memory.

The hippocampus is essential for memory consolidation – where recent learned experiences are transformed into long-term memory.

“Hippocampal function is essential for spatial and contextual learning, and its decline with age contributes to cognitive impairment,” says Dr. Blackmore and colleagues. 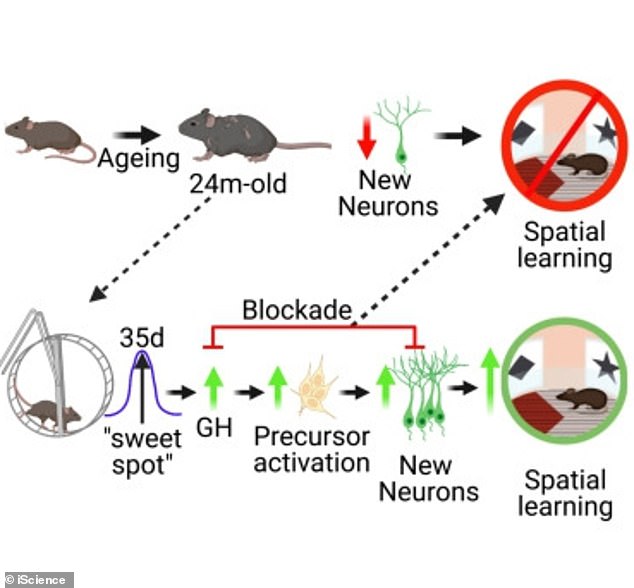 Graphic abstract shows the method and results of the experiments; the team found that 35 days of voluntary physical training improved learning and memory

“Exercise can improve hippocampal function, but the amount of training and mechanisms that mediate improvement remain largely unknown.”

The Active Place Avoidance (APA) task is a dry-arena task used to assess spatial navigation and memory in rodents.

In this task, a subject is placed on a rotating circular arena and avoids an invisible sector that is stable relative to space.

Rotation of the arena means that the subject’s avoidance must be active, otherwise the workpiece will be moved in the sector to be avoided by turning the arena and a slight electric shock will be given.

In the experiments, the researchers tested mice aged 10 weeks to 24 months on the Active Place avoidance (APA) task, which tests rodents’ spatial navigation and memory.

This task involves placing rodents on a rotating platform, which then needs to use ambient signals to navigate away from an electrified “shock zone”.

Not surprisingly, the 18-month-old and 24-month-old mice performed significantly worse than their younger counterparts during the five-day test.

The animals were then placed in a cage with access to a scooter for several periods of time.

When researchers repeated the APA with the old mice, they found that only those who had trained for 35 days showed a significant improvement in learning.

In humans, GH is negatively affected by age, whereas exercise increases circulating GH levels in our body.

“We have been able to demonstrate that artificial elevation of GH in sedentary mice was also effective in improving their cognitive skills,” said Dr. Blackmore.

“We discovered that GH stimulates the production of new neurons in the hippocampus – the area of ​​the brain that is essential for learning and memory.”

In further experiments, the team was able to explore how the production of new neurons altered the circulation in the brain using magnetic resonance imaging (MRI).

MRI showed that improved spatial learning was due to improved connection in the dentate gyrus (DG), part of the brain’s hippocampal formation.

“Using MRI, we were able to study the brain after exercise and, for the first time, identify the critical changes in the structure and functional circuits of the hippocampus that are required for improved spatial learning,” said Dr. Blackmore.

To conclude, the researchers emphasize that they do not believe that the training period for the ‘sweet spot’ of 35 days is a ‘sine qua non’ for activating the hippocampus ‘in all conditions and for all ages’.

“Rather, we demonstrate that a comprehensive study of different training periods is crucial to understanding the mechanisms underlying the cognitive improvements that follow post-training,” they say.

This new research has been published in two separate articles in the open access journal iScience.

The second is called ‘Neurogenic dependent changes in the hippocampal circulation underlie the cognitive effects of exercise in aging mice’.

A neuron, also known as a nerve cell, is an electrically excitable cell that records, processes, and transmits information through electrical and chemical signals.

It is one of the basic elements of the nervous system.

In order for a human being to respond to his environment, neurons transport stimuli.

The stimulation, for example the burning of the finger by a candle flame, is transported by the ascending neurons to the central nervous system and in turn the descending neurons stimulate the arm to remove the finger from the candle.