This article was previously published on July 16, 2020 and has been updated with new information.

I have previously discussed the synergy between magnesium and vitamin D, and the importance of vitamin D for optimal immune function and overall health – especially when it comes to lowering your risk of COVID-19. Previous studies have also highlighted the role this duo plays in cognitive function among older adults, as well as overall mortality.

Such a study,1 “Association of Vitamin D and Magnesium Status with Cognitive Function in Older Adults: Results from National Health and Nutrition Examination Survey (NHANES) 2011 to 2014,” points out that vitamin D not only protects neuronal structures and plays a role in neuronal calcium regulation, but also seems to affect your risk of neurodegeneration as you get older.

Magnesium, except that it is necessary for the conversion of vitamin D into its active form,2,3,4 also plays a role in cognitive health, and magnesium deficiency has been implicated in several neurological disorders.

Higher serum 25 (OH) D levels were associated with a reduced risk of low cognitive function in older adults, and this association appeared to be modified by the level of magnesium intake.

Using NHANES data from 2,984 participants over the age of 60, the researchers compared serum vitamin D status and magnesium intake in the diet with cognitive functions.

After adjusting for disruptive factors, including total calorie consumption and magnesium intake, higher levels of vitamin D in the blood correlated positively with decreased odds of having a low cognitive function score on the Digit Symbol Substitution Test.

The same trend was found when they looked at vitamin D intake, rather than blood level. The correlation between higher vitamin D levels and better cognitive function was particularly strong among those whose magnesium intake was equal to or greater than 375 mg per day. day. According to the authors:5

“We found that higher serum 25 (OH) D levels were associated with reduced risk of low cognitive function in older adults, and this association appeared to be modified by the level of magnesium intake.”

Magnesium improves the plasticity of the brain

While magnesium intake by itself did not appear to have an impact on cognitive function in the study above, other research has highlighted its role in healthy cognition.

Memory impairment occurs when the connections (synapses) between brain cells decrease. While many factors may come into play, magnesium is an important factor. As noted by Dr. David Perlmutter, neurologist and fellow at the American College of Nutrition:6

“It has now been discovered that magnesium is a critical player in the activation of nerve channels involved in synaptic plasticity. This means that magnesium is crucial for the physiological events that are fundamental to the processes of learning and memory. “

A specific form of magnesium called magnesium threonate was found in 2010 to improve “learning abilities, working memory and short- and long-term memory in rats.”7 According to the authors, “Our results suggest that an increase in brain magnesium improves both short-term synaptic facilitation and long-term potentiation and improves learning and memory functions.”

COVID-19 can deprive the brain of oxygen

While we are at the subject of the brain, an article on July 1, 20208 in The Washington Post reviewed results from autopsies of COVID-19 patients. Surprisingly, Chinese researchers have reported9 that COVID-19 patients may exhibit a range of neurological manifestations.

A letter to the editor on June 12, 202010 published in The New England Journal of Medicine also discusses the neuropathological features of COVID-19. As reported by The Washington Post:11

“Patients have reported a host of neurological impairments, including impaired ability to smell or taste, altered mental status, stroke, seizures – even delirium … In June, researchers in France reported that 84% of patients in the intensive care unit had neurological problems, and a third was confused or disoriented at discharge.

… Also this month, in the United Kingdom, they found that 57 out of 125 coronavirus patients with a new neurological or psychiatric diagnosis had experienced a stroke due to a blood clot in the brain, and 39 had an altered mental state.

Based on such data and anecdotal reports, Isaac Solomon, a neuropathologist at Brigham and Women’s Hospital in Boston, set out to systematically investigate where the virus might be embedded in the brain.

He performed autopsies on 18 consecutive deaths and took sections of key areas: the cerebral cortex (the gray matter responsible for information processing), the thalamus (modulates sensory input), basal ganglia (responsible for motor control) and others … “

Interestingly, while physicians and researchers initially suspected that encephalitis was causing the neurological problems seen in some patients, Solomon’s autopsies found very little inflammation. Instead, these neurological manifestations appear to be the result of brain damage caused by lack of oxygen.

Signs of hypoxia were present both in patients who had spent a significant amount of time in intensive care and in those who died suddenly after a short but severe illness. I think this is probably due to increases in coagulation in the microvasculature of the brain.

“When the brain does not get enough oxygen, individual neurons die… To some extent, people’s brains can compensate, but at some point the damage is so extensive that various functions begin to be broken down… The findings emphasize the importance of getting people on supplemental oxygen quickly to prevent irreversible damage. “

Getting back to magnesium and vitamin D, previous research13 using NHANES data from 2001 to 2006, the duo found that the duo has a positive impact on overall mortality. This study also pointed out that magnesium “significantly reversed resistance to vitamin D treatment in patients with magnesium-dependent vitamin D-resistant rickets.”

The researchers assumed that magnesium supplements increase your vitamin D level by activating more of it, and that your mortality risk can therefore be lowered by increasing magnesium intake. That’s actually what they found. According to the authors:

In addition, the inverse relationship between total magnesium intake and vitamin D deficiency occurred primarily among populations at high risk for vitamin deficiency.

Our preliminary results indicate that it is possible that magnesium intake alone or its interaction with vitamin D intake may contribute to vitamin D status. The association between serum 25 (OH) D and the risk of mortality may be modified by magnesium intake. ”

According to a scientific review14,15 published in 2018, as many as 50% of Americans who take vitamin D supplements may not get significant benefits, as vitamin D is simply stored in its inactive form, and the reason for this is because they have insufficient magnesium levels.

Research published in 2013 also highlighted this problem and concluded that higher magnesium intake helps reduce your risk of vitamin D deficiency by activating more of it. As noted by the authors:16

Recently, GrassrootsHealth concluded17 you need 146% more vitamin D to achieve a blood level of 40 ng / ml (100 nmol / L) if you do not take magnesium supplements, compared to taking your vitamin D with at least 400 mg of magnesium per day. day. 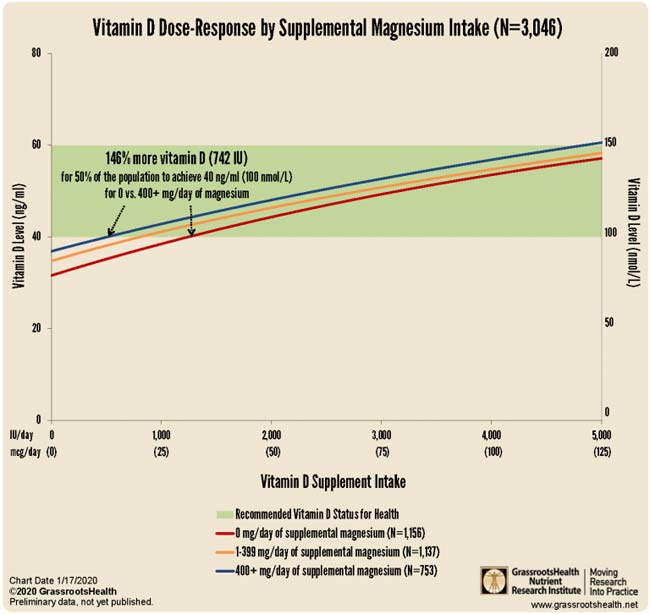 However, the interaction between magnesium and vitamin D is not a one-way street. It goes both ways. Interestingly, while vitamin D improves magnesium absorption,18 Taking large doses of vitamin D can also deplete magnesium.19 Again, the reason for this is that magnesium is required in the conversion of vitamin D to its active form.

Magnesium is not the only nutrient that can have a significant impact on your vitamin D status. GrassrootsHealth data further reveals that you can lower your oral vitamin D requirement by as much as 244% simply by adding magnesium and vitamin K2. As reported by GrassrootsHealth:20 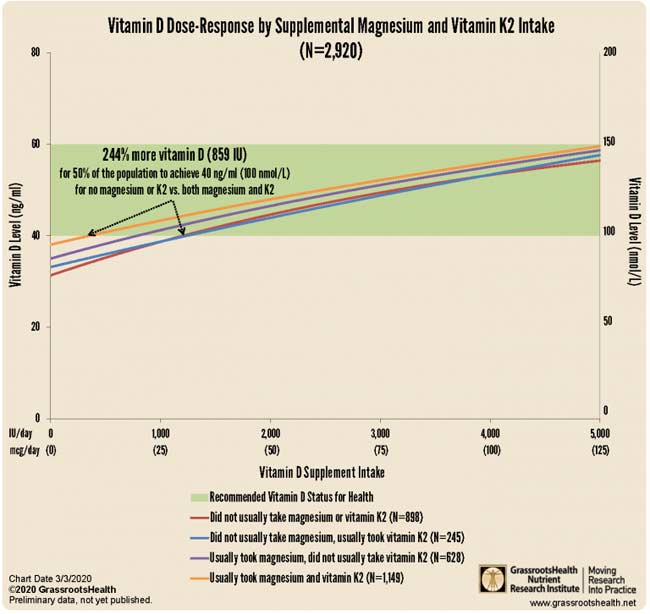 How to increase your magnesium level

The recommended daily dose for magnesium is around 310 mg to 420 mg per day depending on your age and gender,21 but many experts believe that you may need anything from 600 mg to 900 mg a day.22

Personally, I think many people can benefit from amounts as high as 1 to 2 grams (1,000 to 2,000 mg) of elemental magnesium a day, as most of us have EMF exposures that simply cannot be mitigated and the extra magnesium can help reduce the damage from that exposure.

My personal recommendation is that unless you have a kidney disease and are on dialysis, you should continuously increase your magnesium dose until you have loose stools, and then cut it down. You want the highest dose you can tolerate and still have normal bowel movements.

When it comes to oral supplementation, my personal preference is magnesium threonate, as it appears to be the most effective at penetrating cell membranes, including mitochondria and blood-brain barrier. But I also like magnesium malate, magnesium citrate and ionic magnesium from molecular hydrogen as each tablet has 80 mg of elemental magnesium.

Last but not least, even if you still need magnesium supplements (due to denatured soil), it would certainly be wise to try to get as much magnesium from your diet as possible. Dark green leafy vegetables lead the way when it comes to magnesium content, and juicing your vegetables is a great way to increase your intake. Foods with high magnesium levels include:23

Disclaimer! NewsConcerns is an automated aggregator of media worldwide. In each content, the hyperlink to the primary source is specified. All trademarks are the property of their respective owners, all materials are the property of their authors. If you are the owner of the content and do not want us to publish your material, please contact us by e-mail – [email protected]. The content will be deleted within 24 hours.