Alberta reported a new pandemic of about 4,000 cases of COVID-19 on Thursday as hospitalization rates continue to rise.

Dr. Deena Hinshaw’s planned COVID-19 update was postponed to Friday due to a meeting with the province’s COVID-19 cabinet committee to discuss “the latest developments and trends with the Omicron variant.” Instead, the province released only preliminary estimates of new data.

“Decisions are pending and an update will be given tomorrow,” Alberta Health spokeswoman Lisa Glover said in an email to Postmedia.

The new cases come from a positivity of about 30 percent. The total number of provincial cases was last reported on Wednesday at 17,396, although the number is likely to be underreported as most Albertans are told to avoid PCR testing to confirm a positive test result.

Dr. Shazma Mithani, an emergency room physician at the Royal Alexandra Hospital in Edmonton, said it was too early to say what effect Omicron would have on Alberta’s hospitalization rates, but a worrying pattern has emerged.

“As soon as the wave starts to fall, people who have neglected to come in with their significant non-COVID-related medical conditions get sicker,” Mithani said.

“The problem this time is that there was very, very little break between the fourth wave and the fifth wave. The concern is that if the two things coincide, it will only exacerbate the amounts we see in the hospital.” 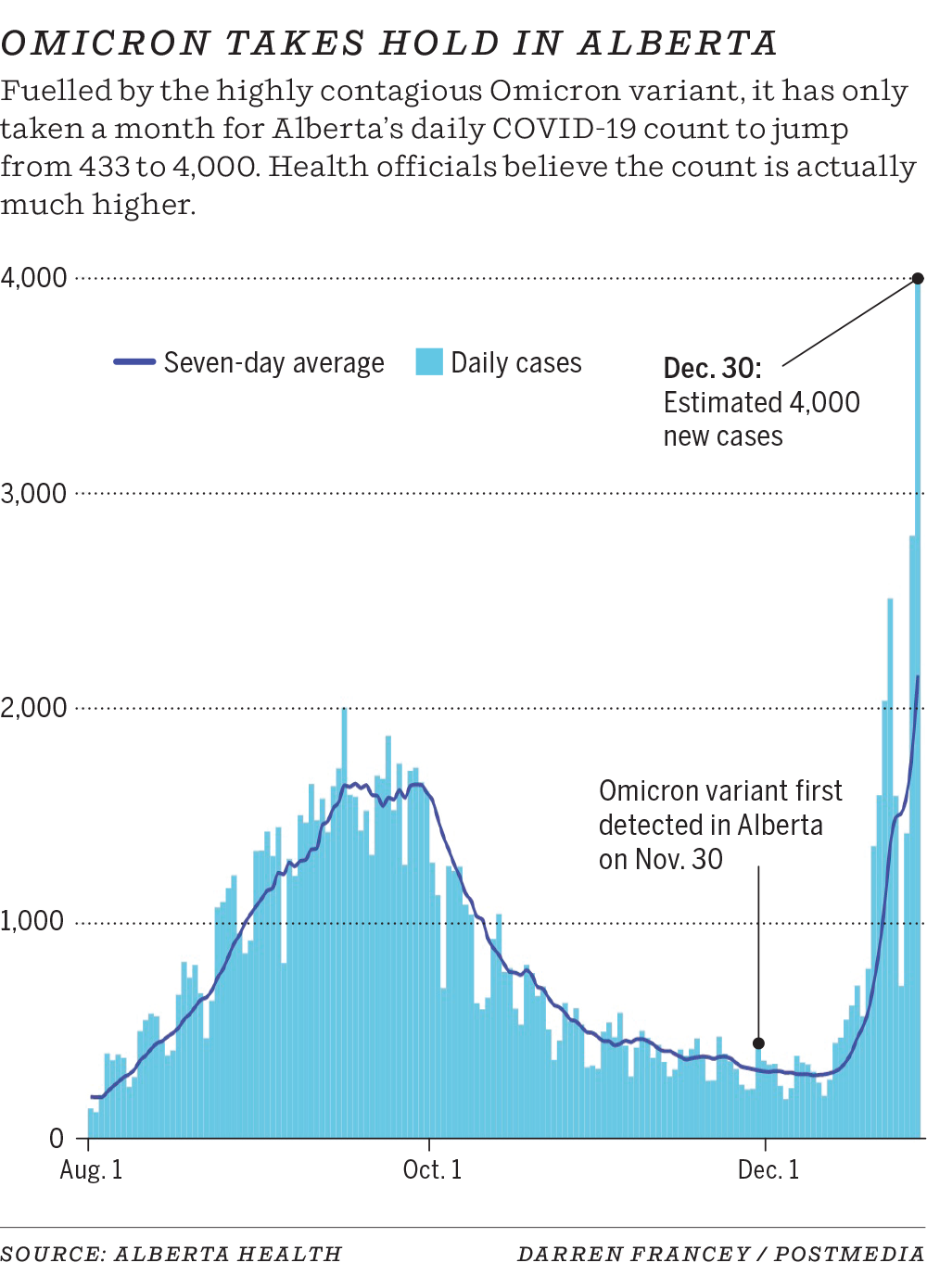 Mithani said she is also concerned that lowering the isolation requirements could result in further shortages of health workers.

“If I’m contagious at the end of day 5 and I spread it to three of my colleagues, they have to take time off work. It can actually end up having a ripple effect,” she said.

“If we’re in a situation where healthcare professionals start getting COVID and need to isolate, we’ll very quickly see a staffing crisis.”

Relying on rapid antigen tests for the majority of Albertans will also prevent health officials from knowing where the transmission is coming from, she said. Quick tests can also show a negative result one day, but a positive result the next.

“It clearly shows that there are pitfalls with the quick tests and the potential for people to be falsely reassured by a negative test.”

“Antigen tests are less sensitive than PCR tests. This means they can be negative even when someone is infected. For this reason, even if someone gets a negative result on a quick antigen test, they should continue to follow all guidelines for public health, “Glover said in an email.

As case numbers with Omicron rise, Mithani said the Alberta government needs to do more to slow down transmission.

Given that 2 doses of vaccine are no longer considered effective in preventing infection with the Omicron variant, when will the REP be adjusted to require 3 doses of vaccine? / 1

For example, the province’s 50 percent capacity limit on entertainment, event and recreation facilities still allows about 10,000 hockey fans to crowd inside the Saddledome. Meanwhile, the Quebec government shut down personal participation in Montreal Canadiens matches to slow the spread of COVID-19 earlier this month.

On New Year’s Eve, Glover said the province encourages all Albertans to follow the health rules in place, whether it be restrictions at a business or event or a social gathering at home.

Albertans should be careful about relying on quick tests for social gatherings, especially ahead of New Year’s Eve, Mithani said. She urged to limit contacts as much as possible and avoid places with large crowds indoors, along with using other tools such as good hand hygiene and properly fitted respirators or medical masks.

“Make sure you only make smart decisions and think about the people around you, not just yourself.”

Sign up to receive daily headlines from the Calgary Herald, a division of Postmedia Network Inc.

Thank you for signing up!

A welcome email is on its way. If you do not see it, please check your junk directory.

The next issue of the Calgary Herald Headline News will soon be in your inbox.

We encountered a problem signing up. Please try again