Saturday, January 22nd 2022, 8:50 am – Frigid temperatures remain situated across southern Ontario as a wintry pattern takes hold through the end of the month.

Cold and snow will be recurring themes in southern Ontario over the next several days. Temperatures will recover just a bit this weekend, compared to how they were in recent days, but a reinforcing shot of Arctic air Saturday evening will keep our temperatures well below seasonal, also helping to trigger another round of lake-effect snow squalls for areas near Lake Huron and Georgian Bay into Sunday. Frigid temperatures will persist into next week, and a clipper will bring even more snow in time for the Monday afternoon commute. More on what to expect this weekend and beyond, below.

DON’T MISS: Here’s how to stock your vehicle’s emergency kit, BEFORE you get stranded

Morning lows Saturday will dip into the negative teens across much of southern Ontario. The focus of the extreme cold will fall across cottage country and eastern Ontario, where another round of extreme cold warnings are in effect through Saturday morning.

Meanwhile, yet another cold front will be cutting across southern Ontario. It continues to bring light snowfall across portions of the northeast Saturday, and will eventually make its way south, entering areas along the Lake Huron and Georgian Bay shorelines in the afternoon. 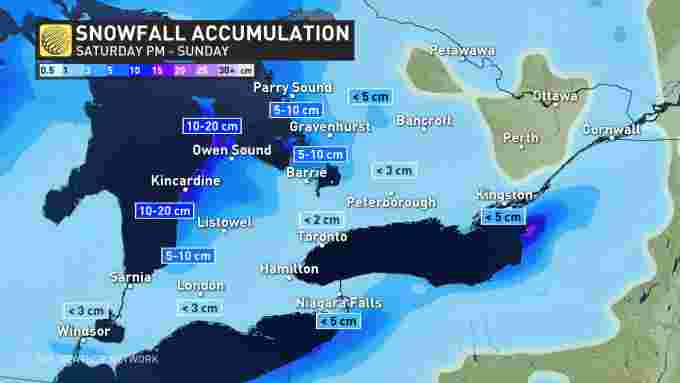 Along this cold front, flurries and perhaps some light snow will impact southern Ontario and parts of cottage country, as well. Accumulations aren’t expected to exceed more than a couple of centimeters with this. However, it is more about the cold air pooling in, paired with the winds directly behind the front.

Winds will be breezy through this afternoon out of the southwest, with gusts of 40-50 km / h. Once the cold front begins to go through in the evening, winds will shift to the northwest – setting up lake-effect snow squalls off of Lake Huron and Georgian Bay.

Squalls may develop in the evening and persist through Sunday afternoon. Snow squall watches are in effect.

Locally heavy amounts within the snow squalls are possible, though highly localized, along with reduced visibilities. Areas along the Lake Huron shorelines may see as much as 10-20 cm of snow through Sunday, with 5-10 cm possible for communities inland of the lake and near Georgian Bay. 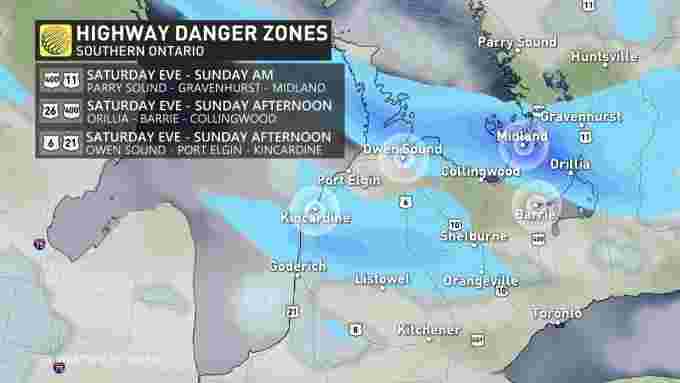 “Snow squalls cause weather conditions to vary considerably; changes from clear skies to heavy snow within just a few kilometers are common. Travel may be hazardous due to sudden changes in the weather. Visibility may be significantly and suddenly reduced to near zero,” Environment and Climate Change Canada (ECCC) says in the watch.

“Surfaces such as highways, roads, walkways and parking lots may become difficult to navigate due to accumulating snow.”

Just trace amounts of snow are likely through the Greater Toronto Area (GTA) and the Golden Horseshoe.

LOOK AHEAD: MONDAY CLIPPER COULD IMPACT AFTERNOON / EVENING COMMUTE WITH DUSTING OF SNOW

Beyond, we’re looking at a persistently cold pattern across Ontario. Both daytime and nighttime temperatures will remain below seasonal into next week. Temperatures could fall into dangerously cold territory once again by mid-week.

A clipper will race across the region on Monday afternoon, bringing generally 2-5 + cm to southern Ontario The bigger concern is the timing of it, and will likely impact travel during the afternoon and evening commute. 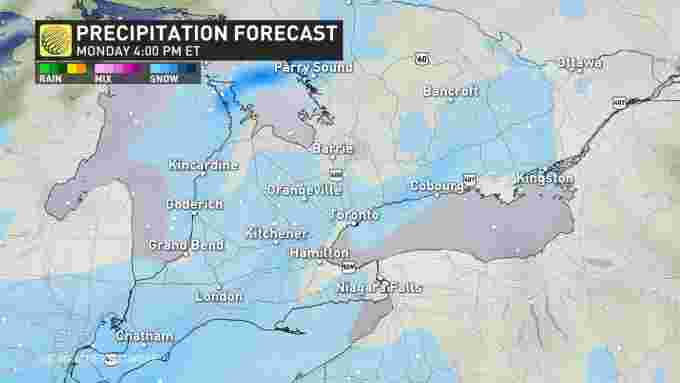 Another round of lake-effect snow squalls looks to accompany an additional blast of Arctic air by mid-week. Temperatures should recover somewhat as we head into next weekend.

A bigger pattern change is expected for the start of February, as the frigid weather will shift back to Western Canada and remain there for the month. While the pattern will definitely be milder than what we are seeing for the second half of January, it is possible that early February will also include some high-impact and messy storms.

“The question is whether the warmer weather can take over and give us an extended thaw or whether the Arctic air to the west will fight back and attempt to push back into the region at times –- resulting in a changeable and stormy pattern,” says Dr. Doug Gillham, a meteorologist at The Weather Network.

Check back for the latest forecast across Ontario.

Cabinet Secretary blocked from giving evidence on partygate to committee