Baby boys who watch TV for at least two hours a day are 3.5 TIMES more likely to be diagnosed with autism by age three, study finds

Baby boys who watch TV for at least two hours a day are three times more likely to be diagnosed with autism, a study has found.

Autism rates were 3.5 times higher among boys exposed to screens for two to four hours, compared to boys who had no screen time.

And the risk of autism increased the more time the infants spent gazing at screens.

However, there was no similar link for girls.

Experts at the University of Yamanashi said their findings support limiting excessive screen time among infants. 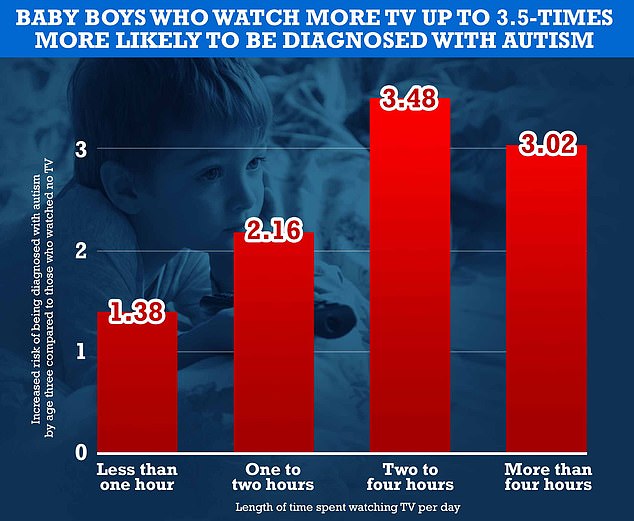 Researchers at the Japan Environment and Children’s Study Group found boys who watched less than one hour of TV per day at one-year-old were 38 percent more likely to be diagnosed with autism in the subsequent two years, compared to boys who did not watch any television. The risk increased to 2.16-times higher among one-year-old boys watching one to two hours per day, while it jumped to 3.48-times higher among those watching two to four hours each day. Baby boys exposed to screens for more than four hours per day were 3-times more likely to be diagnosed with autism than those who did not watch any TV

Autism Spectrum Disorder (ASD) can cause a wide range of symptoms, which are often grouped into two main categories.

This includes difficulty understanding and being aware of other people’s emotions and feelings and / or problems taking part in, or starting, conversations.

It’s estimated about 1 in every 100 people in the UK has ASD. More boys are diagnosed with it than girls.

There is no cure for ASD, but a range of educational and behavioral support programs can help people with the condition.

Scientists do not know exactly what causes autism, but it is sometimes passed on to children from their parents.

And studies suggest it is more common in the children of older parents, as well as mothers who are overweight or suffer pregnancy complications.

Around one in 50 youngsters fall on the spectrum.

Affected children can find it hard to make eye contact, understand how others feel, or have a keen interest in certain topics. Autistic youngsters may also take longer to get their head around information, or repeat things.

Recent studies have spotted a link between the duration of screen time and autistic characteristics in youngsters, the team said.

And the Covid pandemic has triggered a ‘rapid change’ in lifestyle, increasing screen time among children worldwide.

Researchers quizzed the parents of the 84,000 babies on how long their child spent watching TV or DVDs at the age of one.

In a follow-up questionnaire, they asked parents whether their child was diagnosed with autism between two and three – when it is usually spotted.

Some 330 children (0.4 per cent) were diagnosed by their third birthday, with 251 of the cases among boys and 79 among girls.

The findings, published in the journal JAMA Pediatrics, show that the proportion of boys with autism increased as screen time increased.

Compared to boys who did not watch any television, those who watched less than 60 minutes per day were 38 per cent more likely to be diagnosed with autism in the subsequent two years.

The odds were 2.16-times higher among boys who watched it for up to two hours per day.

Meanwhile, rates were 3.48-times higher in boys who spent up to four hours looking at screens each day.

But the same trend was not seen among girls.

The World Health Organization already says that children should not be exposed to screens during the first 12 months of their lives.

Despite the advice, the team said nine in 10 children included in the study had been exposed to screens by the time they were one.

The team said screen time could affect autism rates because electromagnetic waves emitted by screens have been shown to affect behavior in mice.

And earlier studies suggested electronic devices stimulate molecules that have been linked with autism-like symptoms.

The team said the absence of the link between screen time and autism rate among baby girls could be due to the high autism diagnosis rate among boys, which scientists have so far been unable to explain.