Good morning and welcome to the Monday edition of the New York and New Jersey Energy newsletter. We’ll take a look ahead at the week to come and look back at what you may have missed last week.

GET HYPED: It’s time for one of everybody’s favorite days! (Er, if you’re a New York subscriber, that is.) That’s right, we’re ready for the legislative hearing on all things related to the environment (and, if we’re lucky, energy). The Environmental Conservation hearing is scheduled for Tuesday morning, and it’s all virtual so… buckle up for a long day as lawmakers get a relatively rare chance to question agency heads. Expect some questions about the state’s progress to achieve goals under the Climate Leadership and Community Protection Act, whether agencies have enough staff to implement it, permitting for cryptocurrency mining operations and fossil fuel infrastructure, and questions about the extended producer responsibility act that would capture packaging and paper products – as well as local concerns about issues like algal blooms. It’ll be a marathon day, but could yield some interesting insights into Gov. Kathy Hochul’s administration and her budget proposal. – Marie J. French

ICYMI: CRYPTOCURRENCY AND ENERGY GOALS COLLIDE – POLITICO’S Marie J. French: New York is a burgeoning industry for Bitcoin due to its cheap energy and shuttered coal plants. But environmentalists and key state lawmakers are not bullish on its future. In fact, they want to ban it. Lawmakers in New York are pushing for a three-year moratorium on permits for power plants that burn fossil fuels to mine Bitcoin, a measure that would be the first of its kind in the nation and may be a precursor to regulatory actions by Congress. The narrowly targeted measure focuses on gas plants selling or providing electricity directly to cryptocurrency miners who solve complex math problems to validate transactions and earn Bitcoin or other digital currencies.

Despite that focus, the industry is warning that the proposed moratorium would lock New York out of the benefits of an innovative new technology, which has led to massive facilities dotting Upstate New York that were once solely power plants. “In the tech space, three years might as well be three centuries,” said Kyle Schneps, director of public policy for Foundry, a cryptocurrency company based in Rochester. “A statewide moratorium that has vague language and captures companies that use mostly renewables is a mistake.” The fight in New York could be a bellwether for the nation.

– The Buffalo News breaks down a local fight in Niagara Falls where a moratorium has shut down some mining operations and more stringent rules are being considered.

GOOD MONDAY MORNING: Let us know if you have tips, story ideas or life advice. We’re always here at [email protected] spirit [email protected]. And if you like this letter, please tell a friend and / or loved one to sign up.

Want to receive this newsletter every weekday? Subscribe to POLITICO Pro. You’ll also receive daily policy news and other intelligence you need to act on the day’s biggest stories.

Natural gas is accelerating our transition to a clean energy future. The pairing of natural gas with renewable sources has the potential to reduce carbon emissions by 78%. When available, renewables like solar and wind, eliminate emissions. When these sources are not available, natural gas fills gaps, ensuring affordability and reliability for all Americans while further lowering emissions. Natural gas is accelerating America’s clean energy future. Learn more at www.naturalalliesforcleanenergy.org

Here’s what we’ll be watching this week:

– The joint legislative hearing on Hochul’s environmental conservation budget proposal is virtual, 9:30 am

– The Department of Public Service holds a hearing and procedural conference for the Bluebird Renewable Energy project, a pitch to turn farm-based anaerobic digesters currently producing electricity into supplies for pipeline-grade natural gas. The project involves pipelines and trucked gas, virtual. at 4 pm (Register by 3 pm on Tuesday.) 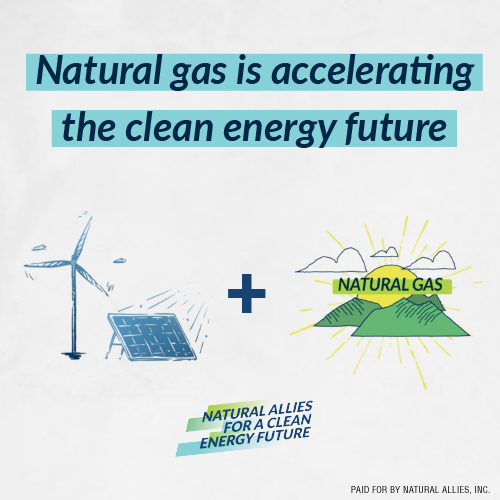 – US Energy Secretary Jennifer Granholm lauds the Climate Leadership and Community Protection Act, including the hard-fought floor for investments in environmental justice communities, as a model for President Joe Biden’s clean energy agenda.

– New York City is trying out something new: mini-plows to clear bike lanes.

– The city of Oswego is getting some Level 2 chargers and one fast charger for electric vehicles.

– The Times Union takes note of one element of the PSC’s approval of National Grid’s rate hike: the agreement to drop a distribution pipeline the company had said was needed to serve growth on the system.

– The overtime threshold for farm workers is poised to drop.

– Still waiting: DEC is expected to decide by Feb. 7 on a permit for new LNG vaporizers for National Grid customers in New York City.

– The Times Union does a deep dive on the Copake solar project battle.

– Community groups are bridging the gap for Ida victims.

Across the country and across our economy, America is building a vital and exciting clean energy future. Natural gas is accelerating this transition and can help us rapidly achieve our climate goals. By partnering with renewable energy sources, natural gas has the potential to reduce carbon emissions by 78%. On its own, natural gas emits 50% less carbon compared to coal, making it a lower-carbon alternative that fills gaps and prevents disruptions whenever sources like solar and wind are unavailable. Existing interstate pipelines for natural gas also offer versatility for transporting hydrogen, renewable natural gas and other zero-carbon fuels of the future. Investing in natural gas infrastructure equips us for continued innovation while ensuring an affordable, reliable transition for all Americans. Natural gas is accelerating our clean energy future. Learn more at www.naturalalliesforcleanenergy.org