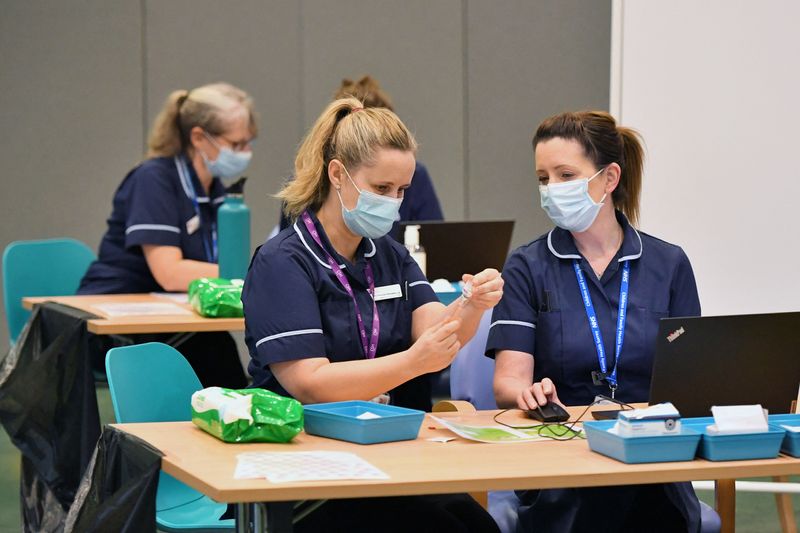 LONDON (Reuters) -The British government plans to revoke its decision to make COVID-19 vaccination mandatory for health workers in England after warnings that an already-stretched service could face serious staff shortages.

The policy would have required employees in the state-run National Health Service and social care workers to be fully vaccinated by April 1. This means they would have to receive their first shot this week to meet that deadline.

The policy announced in November met resistance from some workers, with warnings that sacking those who did not comply could leave the health service facing significant staff shortages. A number of lawmakers in Prime Minister Boris Johnson’s Conservative Party have also criticized the decision.

Health Minister Sajid Javid said on Monday the government would launch a consultation into whether the policy was still needed with the emergence of the Omicron variant, which is more transmissible but results in milder symptoms.

“Subject to the responses … the government will revoke the regulations,” Javid told parliament.

“While vaccination remains our very best line of defense against COVID-19 I believe that it is no longer proportionate to require vaccination as a condition of deployment.”

England has abandoned COVID-19 measures introduced to combat the Omicron variant, including compulsory mask-wearing on public transport and in shops and guidance to work. Scotland, Wales and Northern Ireland decide their own measures, which have generally been stricter.

The government has faced criticism for its overall handling of the pandemic in which Britain has reported more than 155,000 deaths from COVID-19 in total, the seventh highest death total in the world.

More than 75,000 health workers – about one in 20 employees – have not had a COVID vaccine, according to the NHS.

The backlash against mandatory vaccination in Britain is in line with wider sentiment across the world as people from the United States to Ukraine argue that such rules violate human rights and civil liberties.

The government previously said that vaccinations were crucial to contain the spread and reducing severity of the infections, and thereby cut down cases that need to be hospitalized.

Disclaimer: Fusion Media would like to remind you that the data contained in this website is not necessarily real-time nor accurate. All CFDs (stocks, indices, futures) and Forex prices are not provided by exchanges but rather by market makers, and so prices may not be accurate and may differ from the actual market price, meaning prices are indicative and not appropriate for trading purposes. Therefore Fusion Media doesn`t bear any responsibility for any trading losses you might incur as a result of using this data.

Fusion Media or anyone involved with Fusion Media will not accept any liability for loss or damage as a result of reliance on the information including data, quotes, charts and buy / sell signals contained within this website. Please be fully informed regarding the risks and costs associated with trading the financial markets, it is one of the riskiest investment forms possible.