Apple is unhappy with the “Apple-Man” title that indie film director Vasyl Moskalenko is planning to use for a comedy film that’s in development, with the Cupertino company opposing Moskalenko’s “Apple-Man” trademark registration application. (via iPhone in Canada). 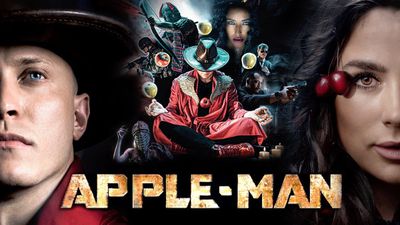 Moskalenko in 2020 launched a successful Kickstarter project for “Apple-Man,” an action comedy film that’s about a part-human part-apple superhero who can levitate apples, and now that the film is in post-production, Apple is taking issue with the “Apple-Man” name. In a YouTube video, Moskalenko explains that Apple opposed the Apple-Man trademark and “initiated trial proceedings,” sending him a 467-page document “full of lawyer terminology.”

“My film has nothing to do with Apple corporation,” Moskalenko says in the video. “I’ve never mentioned anything about MacBooks, iPhones, iPads and so on. Not a single word.” Moskalenko says that his movie is about apples, “the fruits.” Apple appears to be concerned that consumers will think “Apple-Man” is associated with or approved by Apple.

In an appeal to Apple, Moskalenko says that he has “nothing but respect” for the company, and that his film is in no way related to the iPhone, MacBooks, or other Apple products.

Dear Apple company, I understand that you want to protect your business and your product from any negative impact in any possible way, but under no circumstances do I have any intent to harm your brand with my movie. There are no negative associations or negative connotations with this production.

And I would be happy to forward you a final cut to judge for yourself. I’m not going to produce cell phones, computers, software, anything that might be deemed to conflict with your brand. I just want to make a comedy movie about a superhero with a super power that is related to everyone’s favorite fruit.

Moskalenko says he is “open to any negotiations” and hopes he can reach an agreement with Apple. He also told ‌IPhone‌ in Canada that he is worried he’ll have to spend his Kickstarter money on litigation.

Should his trademark registration be denied, Moskalenko is also concerned that Apple would be able to demand that the film be deleted following its release. “It actually looks like trademark bullying,” he said to ‌IPhone‌ in Canada.

Apple has gotten involved in other major trademark disputes over designs that seem to have little relation to the company. Last year, Apple opposed the trademark of Prepear because the pear-shaped logo looked too much like Apple’s own logo. Prepear and Apple were able to settle the issue after Prepear made small tweaks to the leaf design of the pear.