Myanmar’s military junta has warned business owners that they face prosecution and seizure of their assets if they join a general strike planned by the regime’s opponents until Tuesday to mark the anniversary of the coup.

The threat of nationalization comes as the country’s economy rumbles under worsening mass unrest, which General Min Aung Hlaing’s regime has failed to quell in the year since the February 1 battle. Myanmar’s economy, already one of Asia’s poorest, was 30 percent smaller than it would have been without the military takeover and the coronavirus pandemic, the World Bank said last week.

Opponents of the junta have called for a “quiet strike” on Tuesday, after previously holding two such protests last year on March 24 and December 10, which emptied the streets of Yangon and other cities and served as a strong symbol of it. widespread public hostility towards regime.

The junta warned last week that it would prosecute those who took part in the fight under counter-terrorism and other laws that carry long prison sentences. In a statement and letters to business owners, it said property belonging to the convicts could be confiscated by the state.

The ultimatum highlighted the extent to which Myanmar’s companies are increasingly caught between the threats of the military dictatorship and an angry public that wants companies to join them in opposing the regime.

The junta has killed about 1,500 people and arrested nearly 12,000 the year after the coup, according to the Assistance Association of Political Prisoners, a leading human rights group.

Opponents of the regime have responded by organizing strikes and recently seizing arms in the “people’s defense forces”, some of which are under the command of the National Unity Government, a parallel administration formed by supporters of ousted leader Aung San Suu Kyi.

The junta has sought to quell the uprising through a military offensive targeting rebel-held areas, and Myanmar’s central bank has sought to cut off opposition camp fundraisers by ordering banks and mobile wallet operators to freeze accounts.

In recent weeks, unknown assailants have attacked bank branches and ATMs in Yangon and other cities after some customers complained that their accounts had been blocked.

At least six branches and ATMs operated by KBZ, Myanmar’s largest bank, were hit by explosives or arsonists this month after the lender complied with the regime’s orders, which drew criticism online, according to industry executives who asked not to be identified.

KBZ declined to comment, but said it monitored the situation and that “our customers and employees are our priority and our commitment to them is unwavering”. 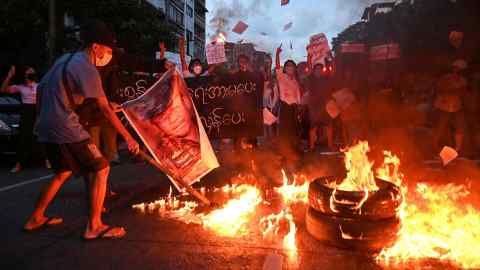 When asked about the attacks, Tin Tun Naing, NUG’s finance minister, distanced himself from the parallel government from them. He told the Financial Times that PDF files under its command had “clear rules of engagement” and were focused on confronting combatants in the regime’s forces.

“Bombing banks and ATMs is different,” said Tin Tun Naing. “There’s just too much risk of harming innocent people, including bank staff, customers and ordinary members of the public.”

Two Myanmar bank directors, speaking anonymously, said the regime in the year since the coup had threatened KBZ and other banks with nationalization if they did not comply with orders to keep branches open or freeze targeted accounts. The State Administrative Council, Myanmar’s junta, did not respond to a request for comment.