A Vancouver chocolatier on Robson Street is shutting down after spending decades serving artisanal goodies there.

Daniel Chocolates’ oldest store is at 1105 Robson Street, but owners will not be renewing the lease after it expires this month, according to a sign on its front door.

Their final day will be April 22. 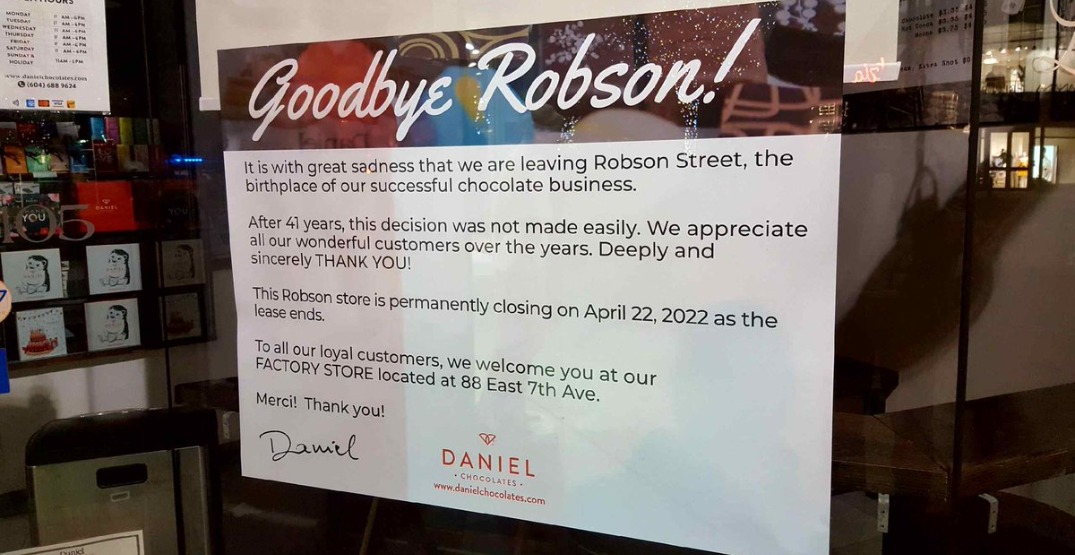 Monique Poncelet, co-owner of the chocolate business and the wife of Daniel himself, says there were a few reasons they had to shut down.

Not surprisingly, high rent had a role to play. Their Robson location is prime real estate that would usually be frequented by throngs of shoppers, tourists, and office workers.

But since the pandemic, foot traffic has been slow. So have profits.

It does not help that parking is difficult to find on Robson, and they often need security to keep staff feeling safe while working alone or in small numbers.

The rising minimum wage would also make it pricier for them to run the location, so they decided to focus on their factory store.

Still, closing their long-standing location was “a sad decision,” she says.

“It’s expensive. People are not feeling at ease really with COVID and there is no level of certainty…. People are not back to the confidence they had pre-pandemic, ”says Poncelet.

“We have lost quite a bit of people who used to come to go to Robson and take in all the shopping there.”

More and more independent businesses have vanished from the area over the years, she adds.

“We do not even really expect to make profits with high rent, but at least, not losing too much money – and we know that there, it will not happen,” she says.

Poncelet says they do not have any plans to reopen a location on Robson.

The chocolatier focuses on using natural, fresh ingredients in their hand-crafted confections.

They also offer lots of low-sugar and sugar-free options, giving chocolate-lovers of all types a way to indulge themselves.

“Later, influenced by master chocolatiers, he honed his craft into something no one was doing: using the finest and most natural ingredients to create his art,” it says.

Their factory store at 88 East 7th Avenue will remain open to customers looking for a sweet treat.

What a third straight La Niña event would mean for Australia