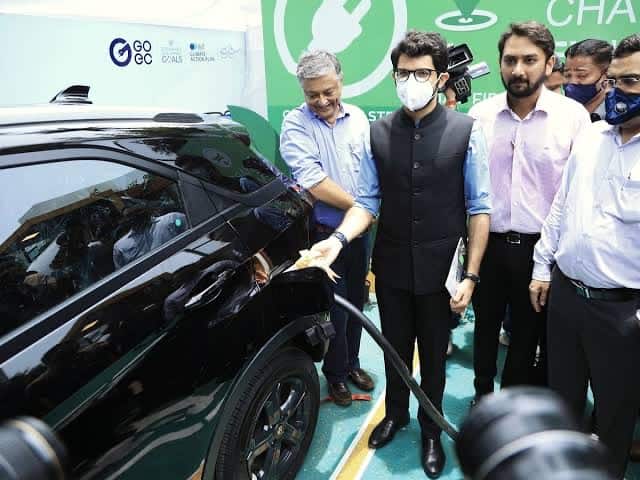 The advantage associated with electric cars is that they are best for the environment in terms of zero-emissions comes with a challenge as well. The charging procedure – the electricity used for charging the EVs is not eco-friendly. And this is where technology is constantly coming into the picture with newer innovations. The recent one is India’s first Biogas-powered EV charger.

Launched a few days back, GO EC is set up in the Mahalaxmi suburbs of Mumbai. In partnership with the Municipal Corporation of Greater Mumbai, AeroCare Clean Energy installed the Biogas-powered EV charger. The system has been given a grant from the Department of Biotechnology (BIRAC) as well as the Government of India. The charger has a system that converts the leftover food from various establishments into useful gases like methane which produces electricity.

“We already had a decentralized waste management system, with fertilizer being a by-product,” says AeroCare CEO Ankit Zaveri. “We process two tonnes of waste a day, which translates to about 180-200m3 of methane, thereby converting it into electricity. ”

The in-charge of the plant, Mustafa Shaikh, says, “GO EC is present in Kerala too, and we initially planned to supply the electricity produced to power street lights. Later on, we tied up with the Kerala unit to charge electric vehicles. ”

Talking in detail as to how the system works, Shaikh said, “Food waste, which is the raw material, is first shredded and crushed before being sent to the hydrolyzer. It is then sent to a mixing tank and passed on to the digester tank, from where it is purified and stored in a balloon. Finally, a generator converts the gas to electricity, ”. The digester tank has a capacity to hold about 1 lakh liters of slurry, which is maintained at 40 degrees Celsius, he added.

The company plans to upgrade the chargers in times to come factoring in the charging speeds.

The charging process is pretty simple, all one has to do is: Download the app – top up the wallet – and pay, and there you go! The introduction of Radio Frequency Identification (RFID) tags is also in the pipeline, the company claims.

The first test results, according to the company reveal whopping figures – ZS EV was charged for 14 minutes at 6.95kWh and the battery percentage showed 14, costing Rs. 118.

The company is all set to install an EV charger in every ward in Mumbai and is looking forward to setting up a new plan in Ahmedabad as well.