Even as the Omicron variant of the severe acute respiratory syndrome coronavirus 2 (SARS-CoV-2) continues to circulate, causing thousands of new cases and breakthrough infections due to its immune escape characteristics, a new research paper describes a neutralizing antibody against the virus that is active against Omicron as well as several other variants. 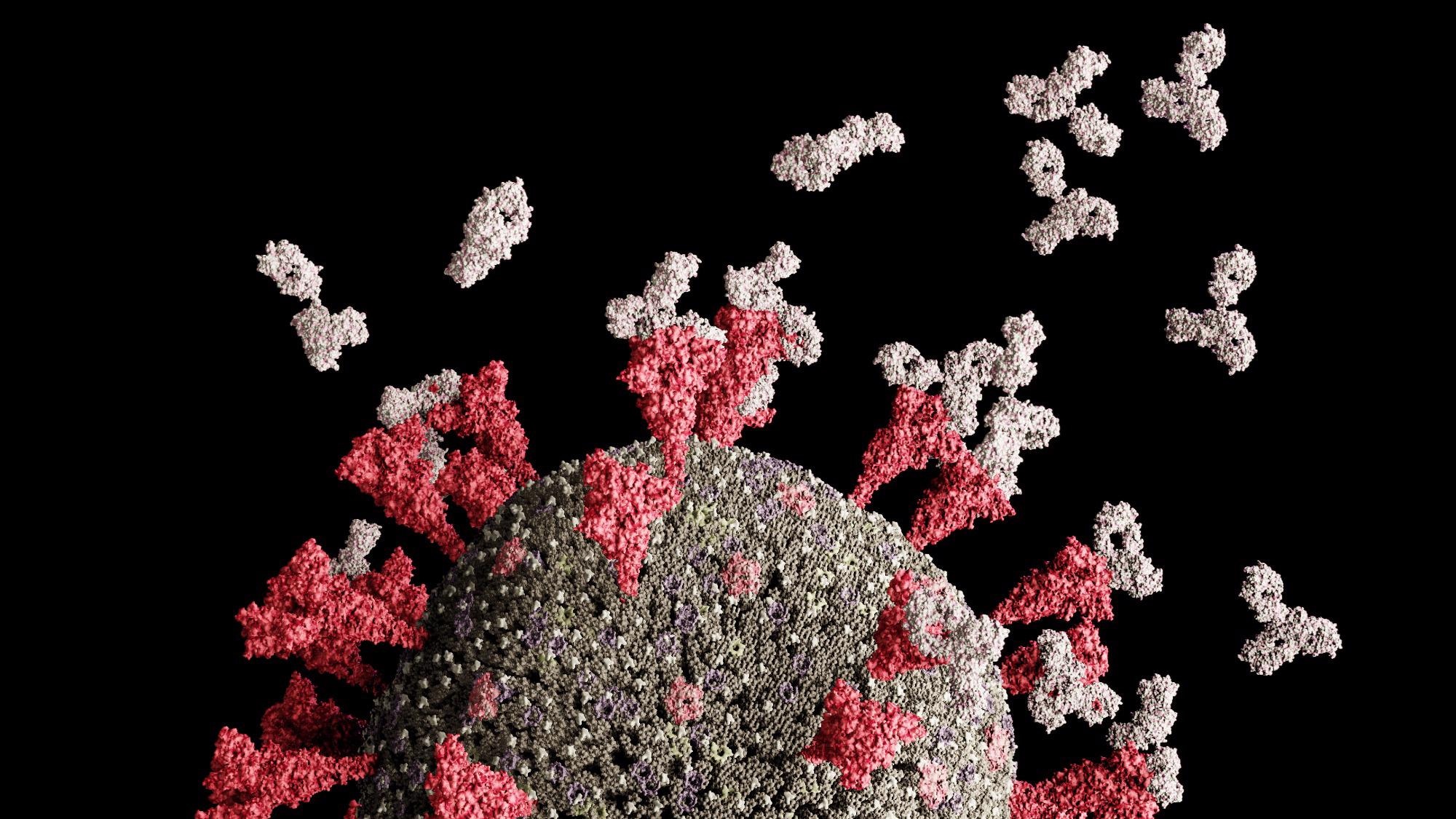 The coronavirus disease 2019 (COVID-19) pandemic is far from over, though the number of reported hospitalizations and deaths has fallen significantly in some regions of the world. SARS-CoV-2 has homotrimeric spike protein antigens on its surface, with each spike monomer comprising the S1 and S2 subunits. The first of these has a receptor-binding domain (RBD) and an N-terminal domain (NTD).

The RBD mediates host cell attachment by the virus as the first step in the process of infection. The attachment is to the host angiotensin-converting enzyme 2 (ACE2) receptor that is expressed on a variety of human cells. Neutralizing antibodies often act by inhibiting the interaction between ACE2 and the RBD, thus preventing SARS-CoV-2 infection.

A number of monoclonal antibodies (mAbs) have been isolated from convalescent serum, with activity against the RBD. The mAb cocktail casirivimab (REGN10933) and imdevimab (REGN10987) have been approved for the treatment of early COVID-19, as has the mAb sotrovimab (VIR-7831).

Newer variants of concern (VOCs) like the Alpha, Beta, Gamma, and Delta have been susceptible to these mAbs, though to varying degrees. However, Omicron showed immune escape, resisting neutralization by casirivimab and imdevimab, presumably due to the mutations at the ACE2-binding site of the RBD, an antigenic supersite. On the other hand, Sotrovimab continues to show neutralizing activity, though at 3-fold lower levels.

The current study, published online in the journal mAbsdescribes a novel mAb, UT28K, that has promising broadly neutralizing activity against the virus.

What Did the Study Show?

In this study, the researchers isolated neutralizing mAbs from peripheral blood mononuclear cells from a COVID-19 patient that recovered from severe illness on the assumption that strongly neutralizing antibodies would be detected. Neutralization assays showed activity against pseudoviruses expressing the D614G spike, as well as several other VOC spike variants.

This serum was tested for unique anti-RBD antibodies using the immunospot array assay on a chip (ISAAC). The result was the discovery of UT28K, one of five clones that inhibited spike-ACE2 binding.

UT28K showed picomolar inhibitory concentrations against the VOCs of SARS-CoV-2, but 10-fold lower neutralizing activity against Omicron. That is, while the half-maximal inhibitory concentration (IC50) against the earlier VOCs ranged from 40-120 pM, it went up to between 500 and 5000 pM against Omicron compared to the wildtype virus while still retaining neutralizing capability. 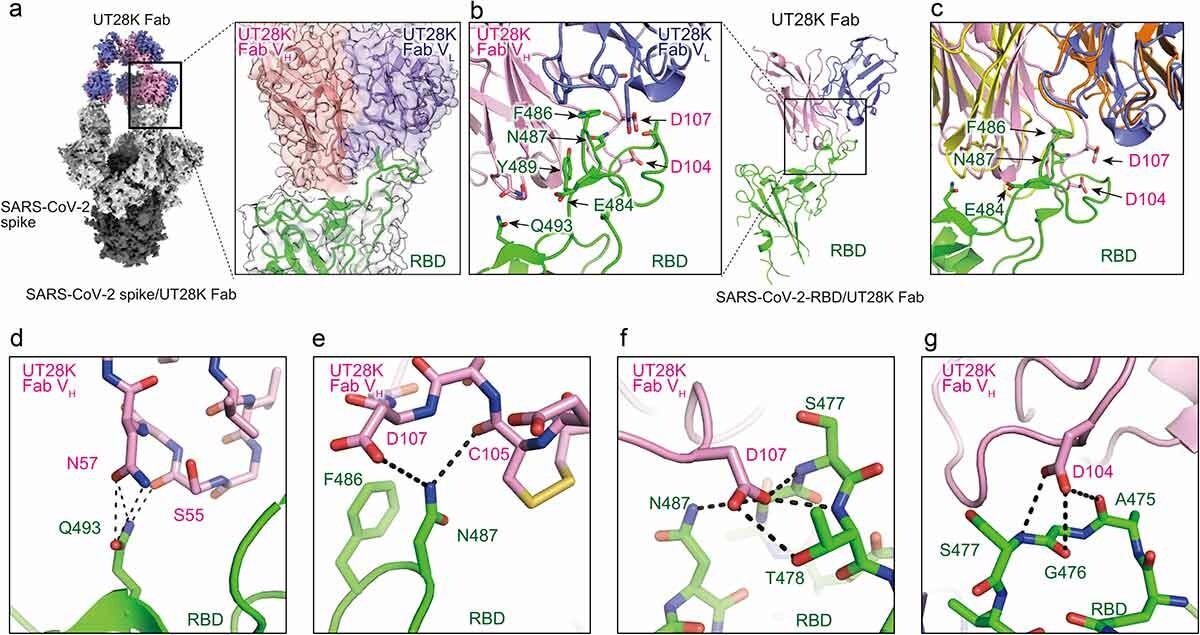 In a Syrian hamster model, the intraperitoneal use of UT28K protected against infection by SARS-CoV-2 mutants or pseudoviruses when the latter was introduced into the trachea. The trachea and lungs were almost completely free of the virus after 24 hours. The protective dosage was 0.3 mg / kg for Alpha, Gamma, Delta, and Kappa, but ten times higher for Beta and Omicron. This shows a strong protective effect against all variants, though weaker for the latter two.

Further analysis showed that unlike other of the neutralizing antibodies first identified here, UT28K used a different pair of antibody genes (IGHV1-58 / IGKV3-20) that produce highly avid RBD binding and potent neutralization of the virus. Structural studies using cryo-electron microscopy (cryo-EM) of the spike protein bound to the antibody-binding fragment (Fab) of UT28K showed the same binding mode as with earlier mAbs that use these genes. X-ray crystallography confirmed these conclusions, with the RBD F486 residue interacting with the antibody’s hydrophobic pocket.

Sidechain bonding was also present with the RBD Q493 residue and the Fab. In addition, some unique interactions were observed, with the side chain of RBD N487, and the main chain residues S477 and T478, forming hydrogen bonds at various points, with the oxygen and nitrogen atoms of the Fab main and side chains.

UT28K failed to react with RBD mutants carrying F486S or N487R, but other mutations did not affect UT28K binding, showing that the above two are essential for binding to this mAb. This again supports its use of IGHV1-58 / IGKV3-20. Finally, when grown in an environment that contains UT28K, the emergence of the Y489H mutation is favored.

What Are the Implications?

The identification of public antibodies that utilize this pair of genes has been reported earlier during research on mAbs that neutralize SARS-CoV-2 and other similar viruses. RBD mutants bound by these mAbs must have F486, by necessity. In this study, UT28K is a public mAb from this group, with a sequence that closely resembles others in this group.

However, unlike the others, its Fab interacts in distinctive ways with the spike RBD main chain, a feature that may explain the broad spectrum of neutralization of this mAb. It is similar in this way to a broad neutralizing anti-HIV1 mAb that also has interactions with the virus-mediated by main chain bonds.

The main chain interactions of UT28K involved A475V, G476S, S477N, but it does not bind with the side chain mutants F486S and N487R. The N487 and Y489 residues of the RBD seem to help orient the F486 residue rightly for binding to the UT28K at the hydrophobic pocket, and mutations at these sites allow for antibody escape. The infamous E484 residue of the RBD that is a known immune escape mutation site, notably in both the Beta and Omicron VOCs, is outside the UT28K binding site

These two appear to explain the broadly neutralizing activity of UT28K, though the Q493R mutation could be the cause of the weakened neutralization against Omicron. This could be due to the removal of hydrogen bonds or because of steric hindrance.

Mutations at F486, N487, and Y489 could cause UT28K evasion, but since the first two appear to be essential for RBD-ACE2 interactions, and since mutations at these sites are extremely uncommon so far, it seems that they are not likely to be an issue.

“F486, N487, and Y489 mutations likely lose their competitive advantage over circulating SARS-CoV-2. As such, the emergence of a UT28K neutralization-resistant SARS-CoV-2 variant is unlikely. These data suggest that UT28K is a viable new mAb. UT28K will likely confer potent protection against SARS-CoV-2 mutants, including new emerging variants, along with vaccines. ”

Cross-language interplay and an integrated lexicon