In a recent study published in the journal Advanced Scienceresearchers evaluated the potential and applicability of macromolecular viral inhibitors against respiratory viral pathogens. 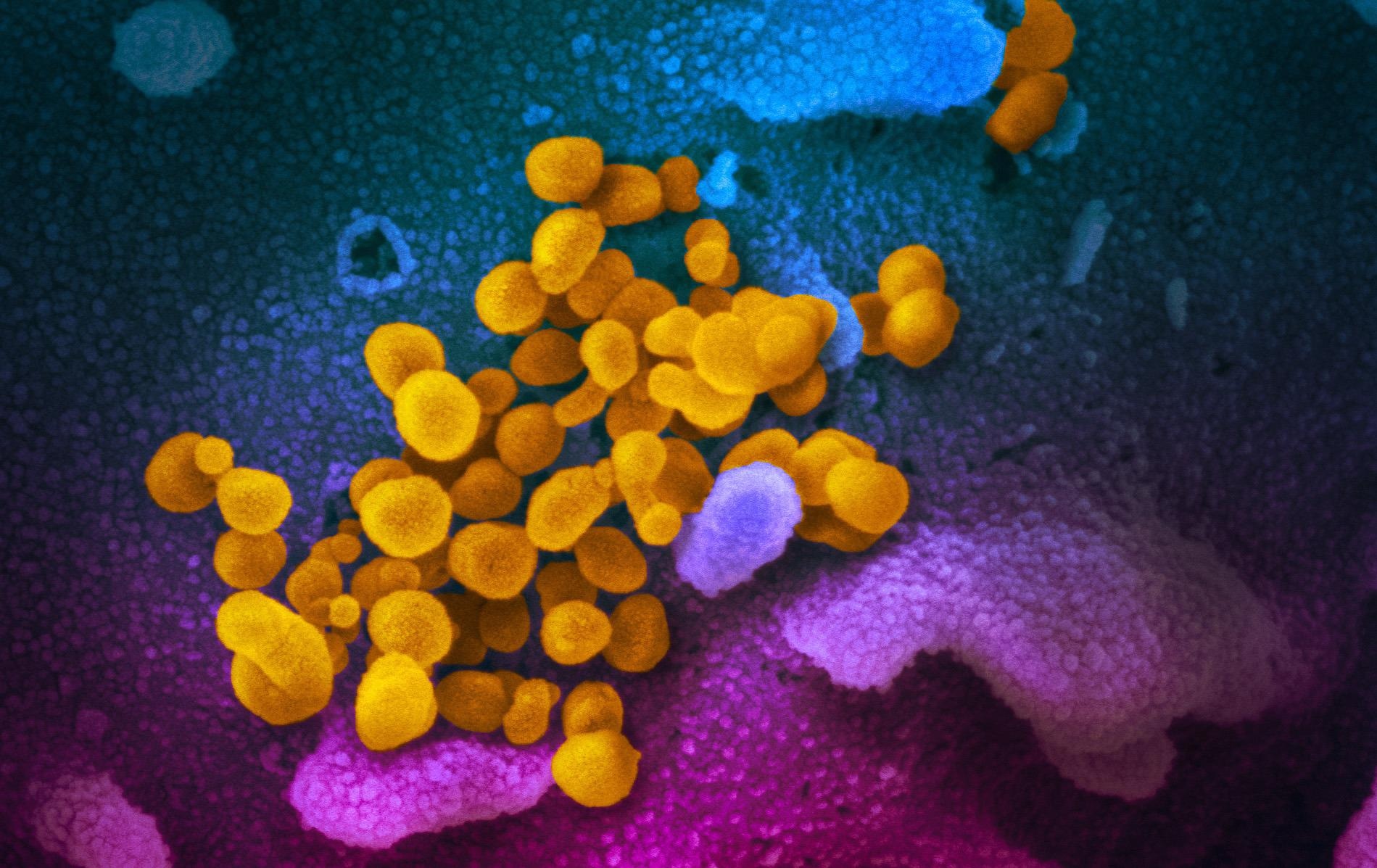 In the last few decades, several pandemics have been caused by viral pathogens, and the current pandemic caused by severe acute respiratory syndrome coronavirus-2 (SARS-CoV-2) is associated with an enormous socioeconomic burden. Consequently, the SARS-CoV-2 pandemic accelerated vaccine testing and development and highlighted the limitations in the field of antivirals. Antiviral polymers are one class of drugs with broad-spectrum activity. Like neutralizing antibodies, the antiviral polymers interact with the viral surface and prevent interactions with the host cell.

The study and results

In the current study, researchers investigated the inhibition of viral cell entry by compounds based on polystyrene sulfonate (PSS) against different viruses, including SARS-CoV-2. Additionally, the polymers were prepared as shells around gold (Au) nanoparticles (NP) or varying sizes (5 – 40 nm).

PSS-based inhibitors were synthesized with different molar masses by reversible addition-fragmentation chain transfer (RAFT) polymerization. Besides, PSS was immobilized on the surface of spherical AuNP. The polymer or nanoparticle formulations are denoted as codes with the first letter (A – D) corresponding to nanoparticle size. The second (S) and third (1 – 3) digits correspond to PSS and molar mass. Core-shell NPs were synthesized by the incubation of AuNP with excess polymer. The core-shell NPs were tested for colloidal stability.

First, the team assessed the activity of PSS polymers to inhibit a panel of enveloped viruses which included human immunodeficiency virus (HIV), herpes simplex virus (HSV), Zika virus (ZIKV), respiratory syncytial virus (RSV), influenza A virus ( IAV) and SARS-CoV-2. Viruses were pre-incubated with PSS, and susceptible cells were infected. The infection rate was determined after one- or two days post-infection (dpi). PSS inhibited infectivity of all tested viruses except IAV, albeit inhibition of SARS-CoV-2 was less potent than HIV-1. The dosage required for complete inhibition was not cytotoxic, and only moderate effects in metabolic activity were noted.

Lower molar mass polymers were hardly active, while 38 kDa and 100 kDa were most effective with similar antiviral activity. The antiviral activity of AuNPs coated with PSS polymers was assessed, and the formulations were highly effective. Specifically, HIV inhibition was the most potent, while SARS-CoV-2 inhibition was significantly less potent. Interestingly, the immobilization of PSS onto AuNP achieved significant potentiation of antiviral activity. For instance, the 3 kDa PSS polymer alone was an ineffective inhibitor but proved effective when conjugated with AuNP. The conjugated particles were not cytotoxic at the tested concentration.

Next, pseudo particles of rhabdovirus were coated with spike (S) proteins of SARS-CoV-2 Wuhan, Alpha, Beta, Gamma, Delta, Kappa, and Omicron variants. Imdevimab, casirivimab, bamlanivimab, and antibody cocktail (REGN-CoV-2) were used as controls. In line with previous reports, imdevimab and the antibody cocktail were active against all variants except Omicron. A 100 kDa PSS solution (S3) and PSS-AuNP conjugate (BS3) were effective against all variants. Moreover, the 100 kDa PSS and PSS-AuNP formulation were effective against seasonal human coronavirus (HCoV) -229E and HCoV-OC43. 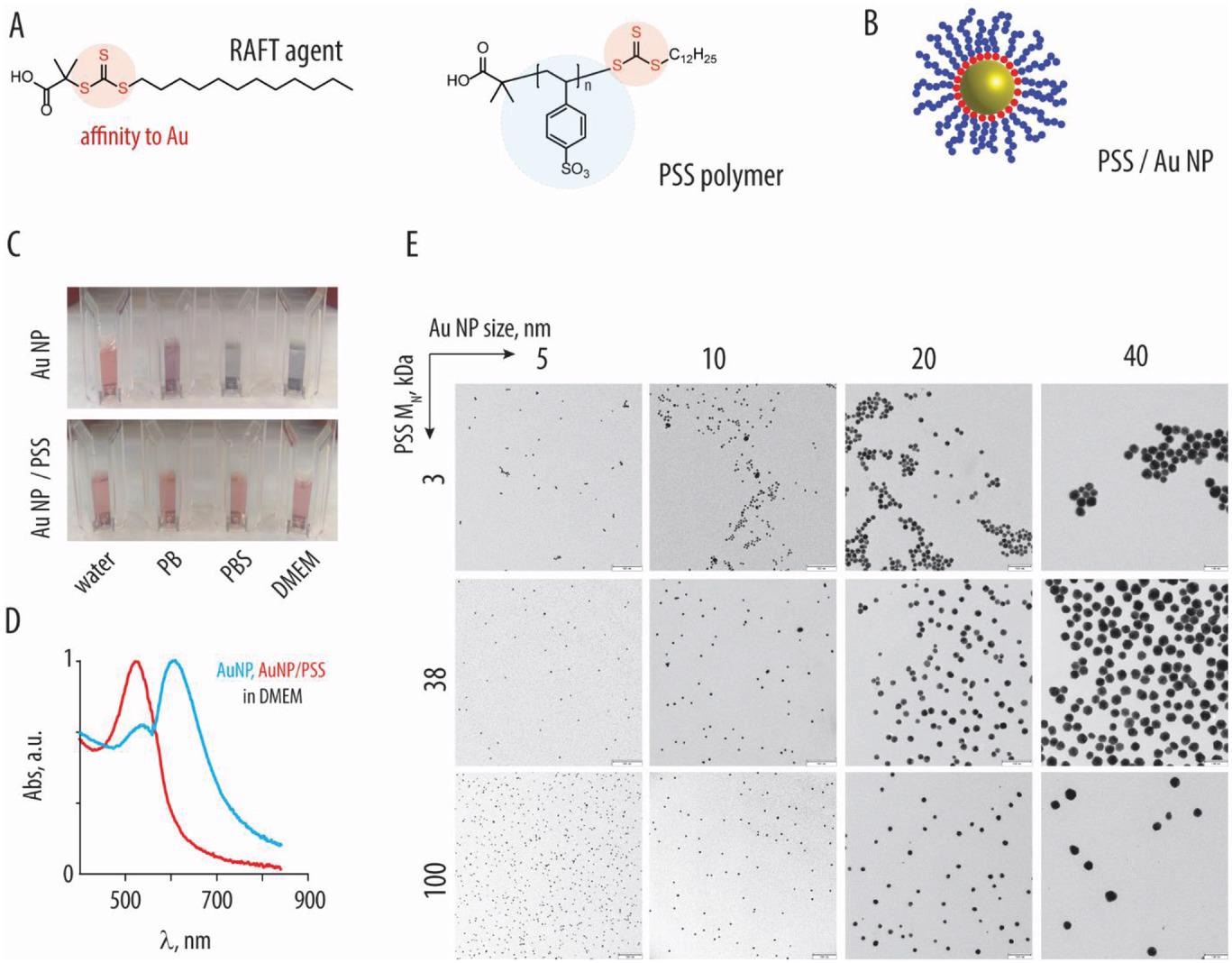 A) Chemical formula of the RAFT agent and the resulting polystyrene sulfonate polymer (PSS). B) Schematic illustration depicting association of the RAFT-derived polymers (blue) with gold nanoparticles, due to affinity of the trithiocarbonate (red) to the gold surfaces. C) Photography images of the 10 nm gold nanoparticles, with or without the brush-type corona comprised of PSS (100 kDa) in water, phosphate buffer, phosphate buffer saline, or DMEM cell culture medium: colloidally dispersed AuNP have a characteristic red color , whereas nanoparticle aggregation produces a characteristic blue color. D) UV / vis spectra corresponding to the images in panel C for AuNP with or without PSS corona in DMEM. E) Transmission electron microscopy image for AuNP (sized 5–40 nm) functionalized with PSS (3, 38, and 100 kDa), scale bar = 100 nm.

A 100 kDa PSS solution was injected intranasally into mice once for four days and subsequently euthanized. Higher doses were associated with significant loss of body weight. Specifically, a 250 μg dose (the highest feasible dose: HFD) caused severe body weight loss such that all animals in this group had to be euthanized on day 3. All animals in the HFD showed intraluminal fluid and debris and erosions of serofibrinous exudate and olfactory epithelia in the nasal passage. Contrastingly, a 2.5 μg PSS dose did not decrease body weight; histopathological investigations revealed no signs of localized toxicity. Further, 2.5μg PSS-AuNP conjugates were well tolerated without any toxic effects.

Finally, the antiviral effects were evaluated in vivo in mice using SARS-CoV-2 and a luciferase-expressing recombinant RSV (rHRSV-Luc). A second polymer dose was administered at two dpi, and viral replication was quantified. Statistically significant inhibition of viral replication was evident for each of the four antiviral formulations. In a prophylactic scenario, transgenic mice received S3, BS3, or phosphate-buffered saline (PBS) 60 or 10 minutes before infection with 300 focus-forming units (FFU) SARS-CoV-2. No antiviral effect was observed with S3 or BS3 in this case.

In a different scenario (pre-incubation), virions were incubated with PSS or AuNP-PSS conjugates and later administered to mice. Additional polymer doses were injected after seven and 48 hours after infection. Viral load, determined by quantifying viral genome copies, was 240-fold lower with the PSS-AuNP formulation and 550-fold lower with PSS. This indicated that PSS and PSS-AuNP decreased in vivo infection if administered simultaneously, followed by additional injection post-exposure.

In summary, the study illustrated the inhibitors based on PSS and its gold nanoparticle formulations as promising broad-spectrum antiviral candidates showing inhibitory activity against ZIKV, HIV, RSV, HCoVs, HSV, and SARS-CoV-2. The inhibitory activity of PSS with lower molar masses would be amplified when conjugated with AuNP. The inhibitors were ineffective in the prophylactic setting, partly because the transgenic mice ubiquitously expressed the human angiotensin-converting enzyme 2 (hACE2), making them more susceptible. Overall, these findings provided evidence for in vivo efficacy of PSS and its AuNP formulation as broad-spectrum antivirals against enveloped viruses.

Happy Bobby Bonilla Day! Here’s why the Mets are still paying a 59 year old who has not played in 20 years