AMD has been on a streak with its CPU department over the last 5 years, culminating in the latest 3D V-Cache technology super-powering the Ryzen 7 5800X3D processor … a CPU that battles Intel in the gaming department, and wins.

Intel isn’t sitting on its hands, however, making big changes to its architecture and lineup over the years where it has finally begun to dig itself out of the hole it was digging for itself prior to the 12th Gen Core “Alder Lake” CPUs arrived. Well, the next-gen 13th Gen Core “Raptor Lake” CPUs are on their way, and Intel is throwing in a bit more of the kitchen sink to compete against AMD.

The latest rumors on Intel’s new flagship Core i9-13900K “Raptor Lake” CPU is that it could have up to 55% more cache than the Core i9-12900K … 68MB of L3 cache to be precise. An alleged CPU-Z screenshot shows off the boosted cache amounts, but remember this is all rumor mill for now … but nothing surprises me, Intel is going to need it against Zen 4.

Intel is reportedly cranking up the CPU clocks on its Raptor Lake CPUs, where we might see the dizzying silicon heights of 5.8GHz. Intel is going to be throwing everything it can at the 13th Gen Core CPUs, with higher CPU clocks, more cache, and more cores. 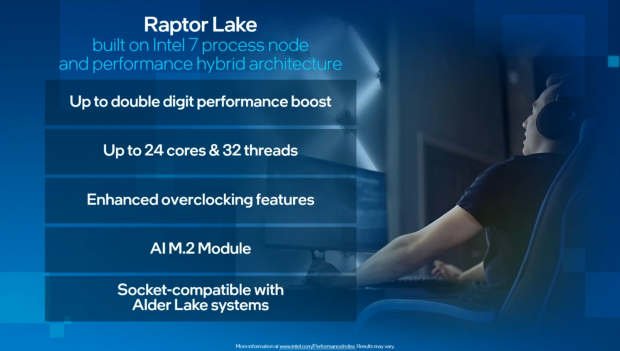 We can expect the new Raptor Lake CPUs to arrive with up to 24 cores and 32 threads, with Intel promising “up to double digit performance boost” as well as “enhanced overclocking features”. There’ll be a new AI M.2 module, while Raptor Lake will be socket-compatible with Alder Lake systems (no motherboard upgrade).

The above list is what we could expect from Intel’s new 13th Gen Core “Raptor Lake” CPUs (and their boosted cache amounts).