Traveling has never been easier with Metrolink.

This past weekend, Metrolink kicked off its travel season with the first-ever Adventure Train Challenge on Saturday, May 14. How easy is it to travel by train around LA and beyond? Let’s find out …

What is Adventure Train?

Adventure Train is part of Metrolink’s Summer Travel campaign that demonstrates how train service is a simple link from city to beach adventures and everything in between.

Over the weekend, fans got to follow their favorite influencers in real-time as they adventured through LA on Metrolink.

Watch the entire recap of this event on @Metrolink ‘Adventure’ Highlight. 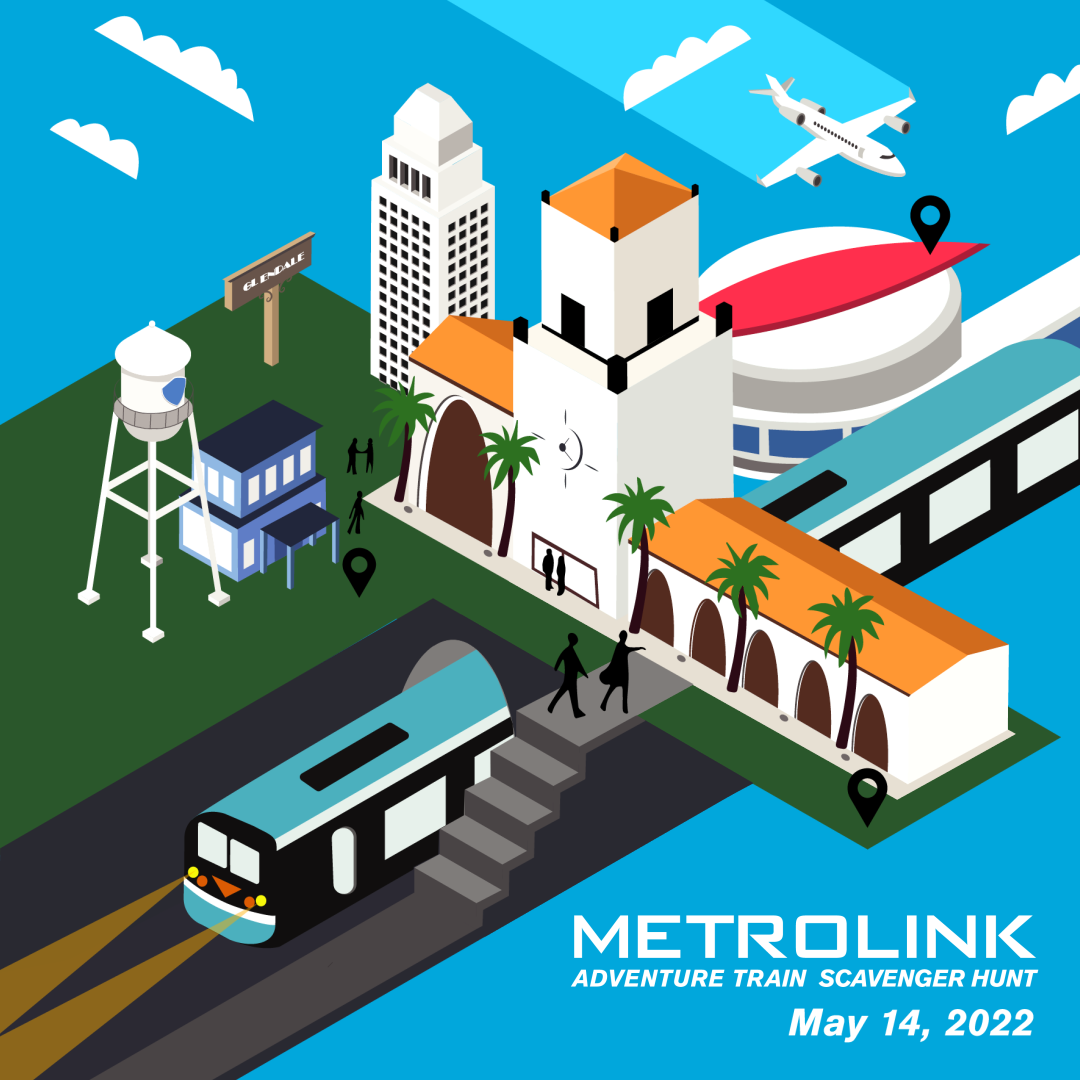 “Now you are ready to hit the skies. Please check-in at the Avelo ticket counter at

With suitcases in hand, they ran off to Hollywood Burbank Airport to find the Avelo Airlines counter to check their bags and collect the next clue. After scurrying around and finding the right counter, the pair of influencers received their next clue from Avelo Airline’s Head of Marketing and Partnerships, Tara Harrison. The next clue that she handed them read:

“Make your way to Downtown Burbank via Metrolink where the city of Gotham’s most loyal citizen awaits you.”

To reach Downtown Burbank from the airport, the team had to take a shuttle service to the Burbank Airport – North Metrolink station shuttle. One quick call to the shuttle driver, and they were on their way to the train station. 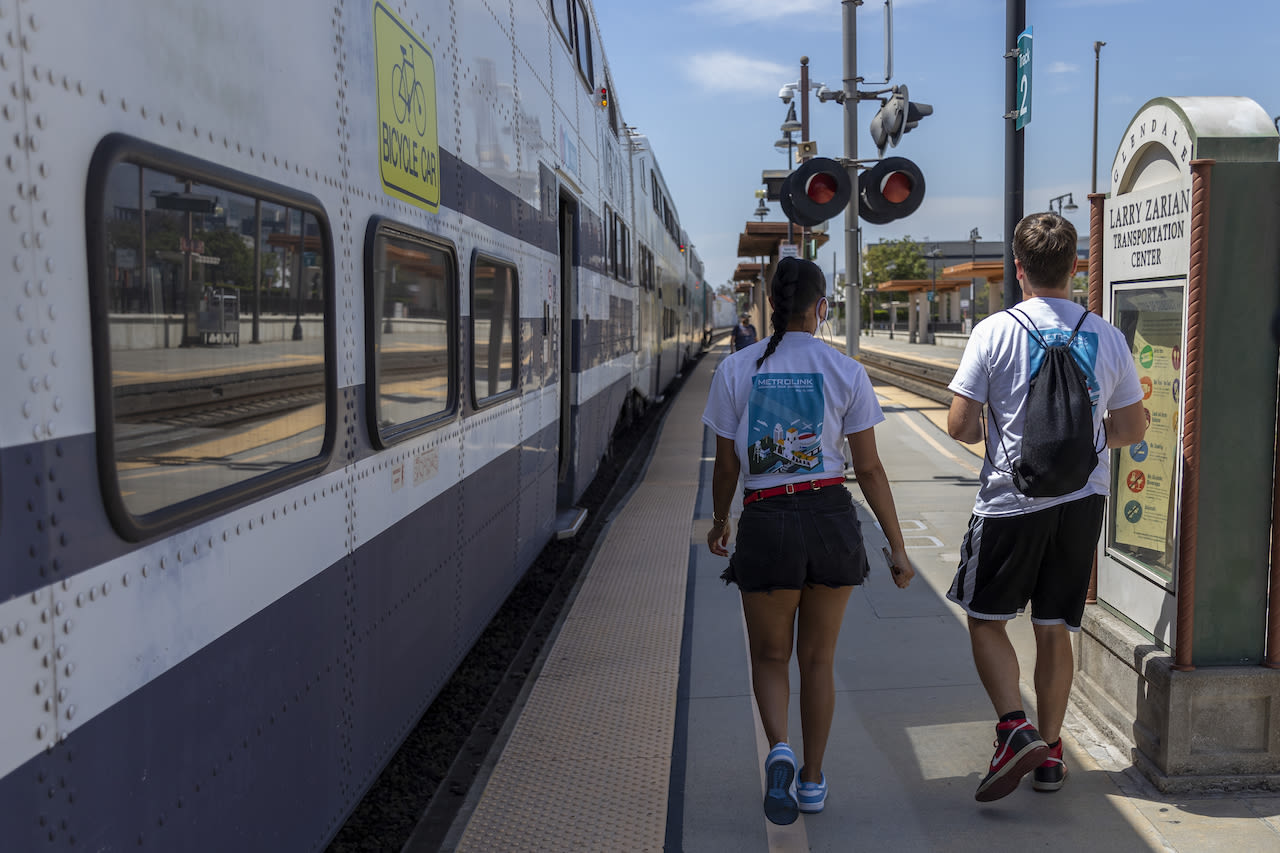 Metrolink train 264 picked up the team and delivered them to the Burbank – Downtown station. From there, the search was on to find the next clue. The influencers’ strategy was to ask a few people in the streets and in the Jackalope Arts Fair, which just so happened to be exhibiting in Downtown Burbank along San Fernando Boulevard. After getting through some general distractions, the duo managed to find what they were looking for at the AMC Burbank 16 Cinemas. The Batman statue held a bag of art supplies and the clue to the next location.

“It’s time to get artsy. The Jackalope Art Festival is happening a few blocks away. Make your way to the heart of it at the intersection of N San Fernando Blvd & E Orange Grove Ave. ” 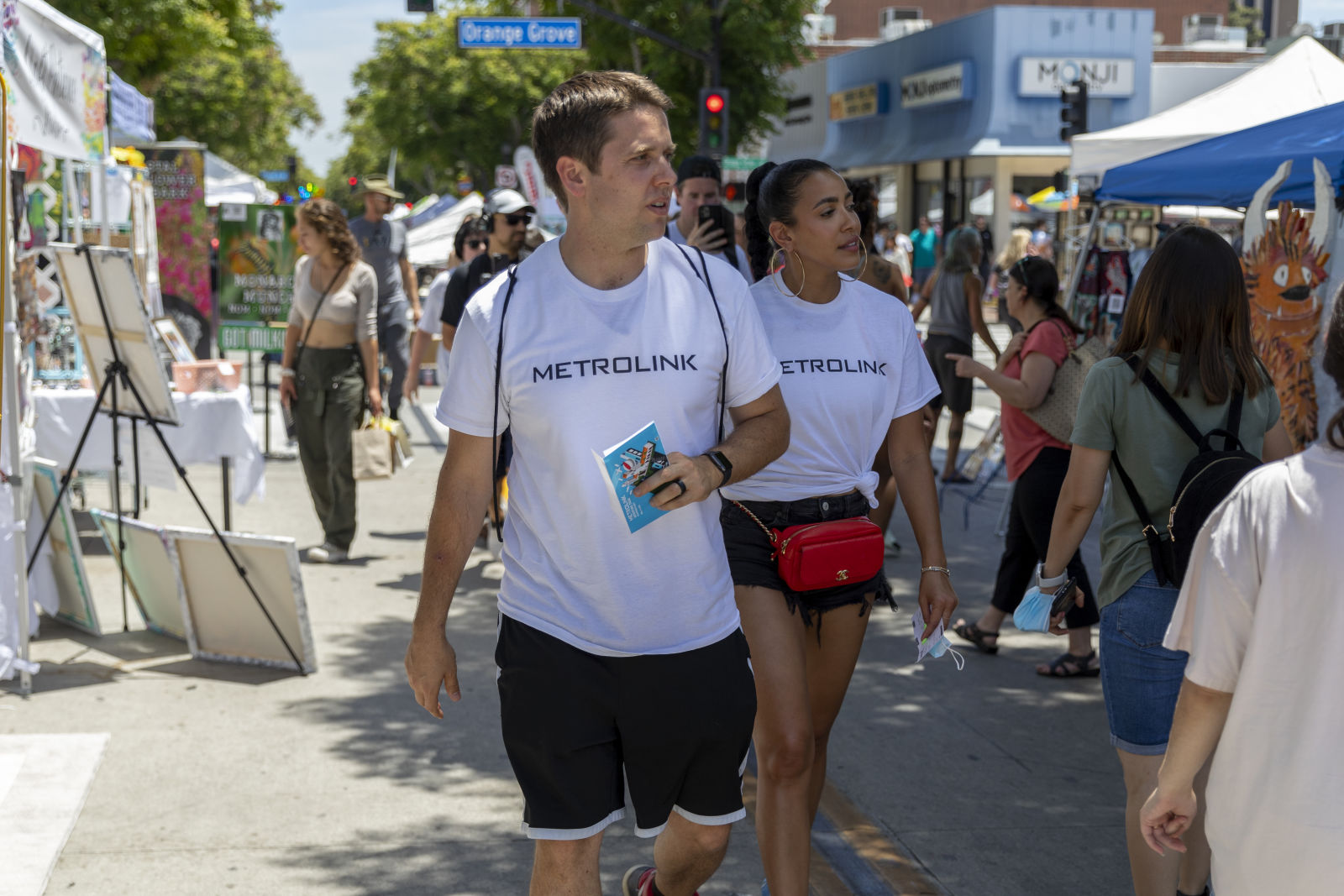 After a hula hoop break and a little shopping, the team found their corner and learned what their next challenge would be. Artist Jen Swain, along with Jackalope Arts Fair founders Melissa Kohout and Sara Diederich, explained that they should use the chalk in their art bag to draw a superhero of their choice. After a few minutes, Julissa came up with a plan for what to draw. Once the drawing was complete, the team received their next clue.

“Make your way to Glendale via Metrolink and find a unique museum where Neon reigns supreme. You need to schedule your Metro Micro to arrive there on time! ”

Back to the Burbank – Downtown station to catch Metrolink train 266 and call for the Metro Micro service to meet the team at the Glendale station and take them to a place with neon. Thus, enter The Museum of Neon Art. Inside the museum, the team learned how neon lights are made and even got to bend a tube of their own. Once they were done, they entered the gallery space where they were met with a dance challenge. 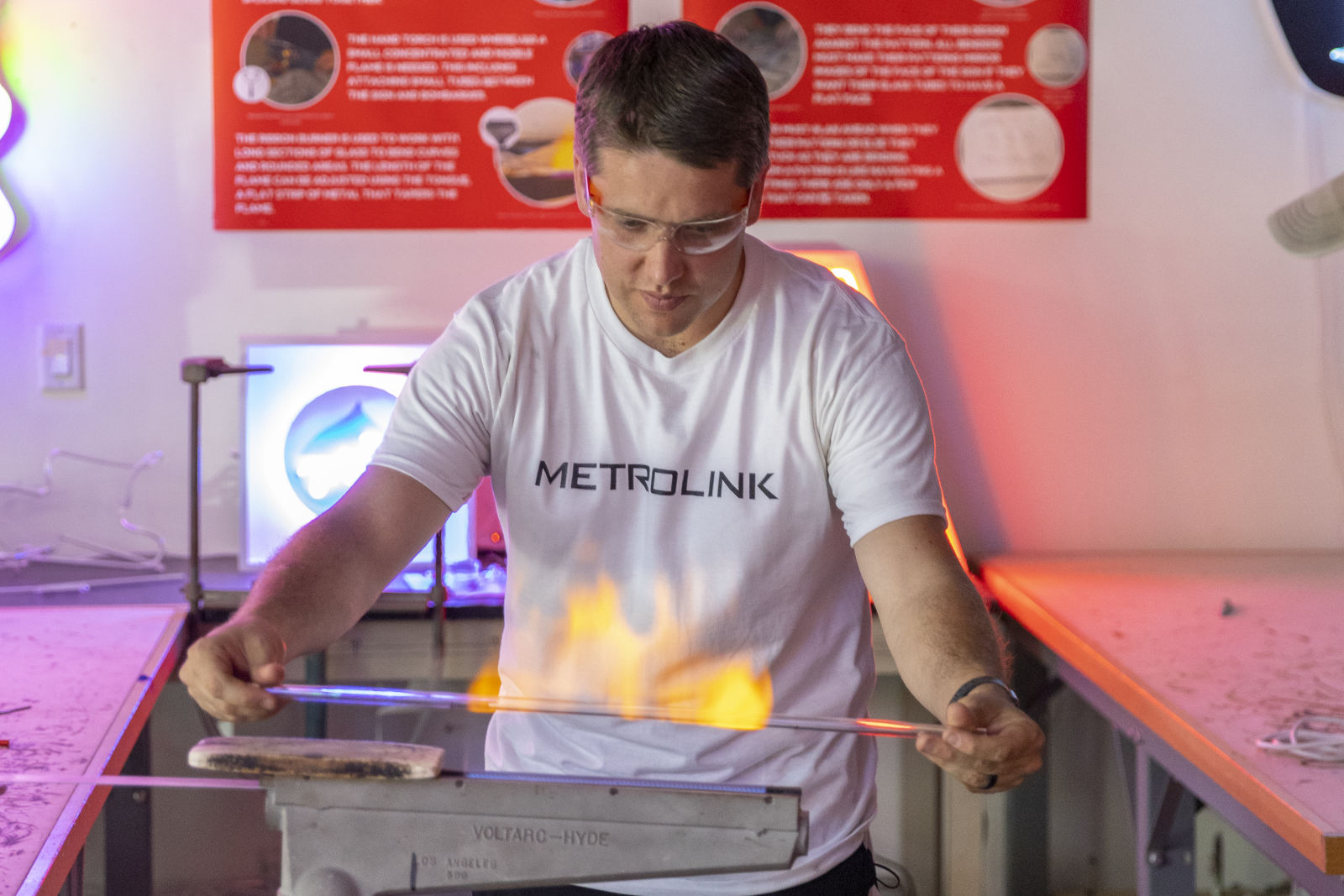 So You Think You Can Dance season 10 winner Fik-Shun Stegall coached the pair through some dance moves and gave them the clue to their lunch break location.

“You are in the neighborhood of a restaurant the LA Times called ‘The Best Armenian Restaurant in LA’. Please find this little gem and enjoy your lunch. ”

A quick Google search led them to Mini Kabob, a short walk from the museum. With bellies full of falafel, beef and chicken skewers and hummus, the next clue said

“You are on the final stretch. In order to make it to your last destination, you will need to make your way to the Metro Bike Hub at Union Station via Metrolink. ” 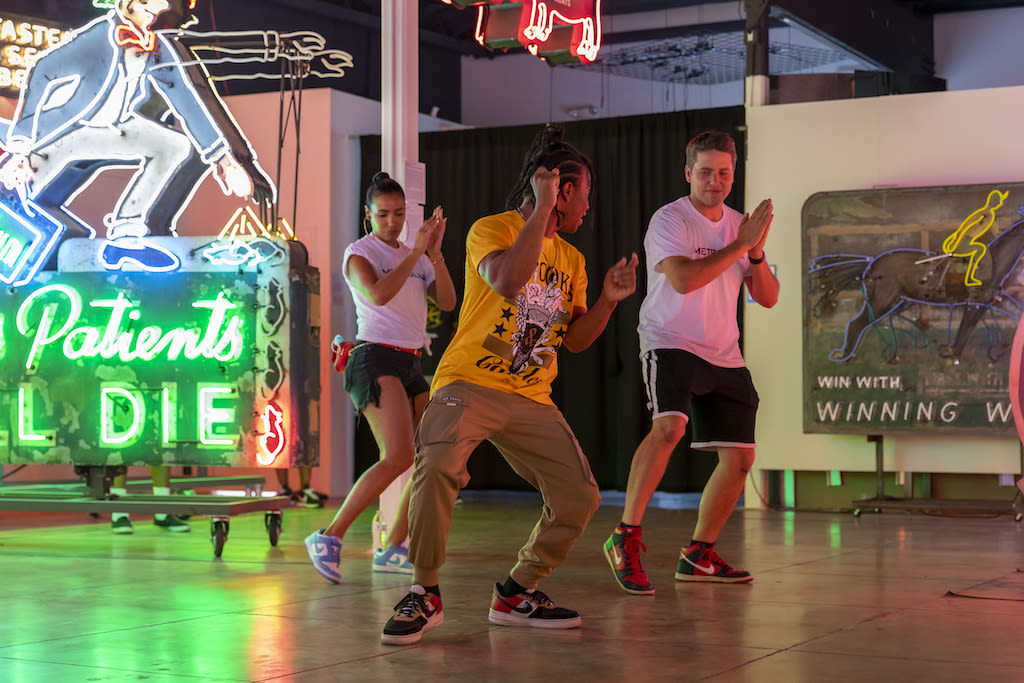 Metro Micro picked the team up and delivered them back at Glendale station to meet Metrolink train 268 headed for LA Union Station.

A quick final ride on Metrolink delivered the team to LA Union Station and the hunt was on to find the Metro Bike Hub. It was not easy to find as the hub is tucked away in the parking lot outside of the historic entrance to the station. With the use of the Metro Bike app, the bikes were unlocked and the team received their final location.

“There’s an indoor basketball court in Little Tokyo that awaits you for a final recreational challenge. Bike your way there. ”

A quick search found it to be Terasaki Budokan. Off they went.

Upon arrival, the team saw that a clothing fair was just wrapping up and the basketball gym was waiting for action. After a few trick shots and little basketball juggling, Josh and Julissa crossed the finish line to end the Adventure Train Challenge.

Throughout the duration of the challenge, the Metrolink social media team was hosting a giveaway, offering free flights on Avelo Airlines out of Burbank to anywhere the airline services. The Metrolink social team chose winners at random during the live broadcasts that day, and will be giving away more pairs via their social channels throughout the summer.

Group of 8 from Toronto area wins $ 100K on Encore – Toronto