An Australian bodybuilder and former Mr Universe has revealed the demons that led to him ‘falling’ from a two storey building as he admits to taking so many steroids he can no longer produce testosterone naturally.

Calum von Moger, 31, pleaded guilty in the Melbourne Magistrates’ Court on Thursday to possessing a variety of drugs, including testosterone, cannabis and about two grams of methamphetamine – the deadly drug ice.

His fall from a May 6 building shocked the body builder’s legion of fans, who feared he may never have walked again.

Appearing via video link with his arm in a sling, the court heard von Moger remained in severe pain after spending 11 days in The Alfred hospital following the fall.

Moger – a three-time World Fitness Federation ‘Mr Universe’ winner and actor who once played Arnold Schwarzenegger in a film – had been suffering severe depression at the time of the incident, which left him with injuries to his spine, face and neck. 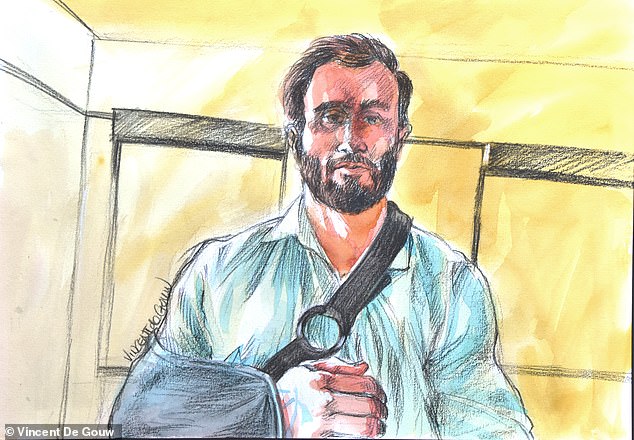 Calum von Moger as he appeared in court on Thursday

The court heard cops pulled von Moger over in Melbourne’s CBD on January 31 after observing his Ford Ranger was unregistered.

Concerned about his ‘erratic’ behavior and ‘enlarged pupils’, the officers called for back-up.

The court heard von Moger did himself no favors when he jumped out of the car and continued to behave badly.

A search was conducted, with officers finding a shoulder bag containing a small deal bag of meth.

A further search turned up his illicit stash of testosterone, needles, three containers of cannabis oil, another bag of white crystal powder and an assortment of prescription drugs, including Viagra.

The body builder was placed under arrest.

During his interview, von Moger claimed one of his mates must have owned the meth.

‘I found that deal bag in the back and freaked out because I do not use it. I knew it belonged to someone so I put it in my wallet to either give it back or throw it away, ‘he said.

‘The shoulder bag isn’t mine. I was driving friends around all weekend and they were using drugs and left it. It’s not mine but I know I was in possession of it. ‘

But he admitted to using testosterone for the past 10 years.

‘I no longer produce it naturally and need to have it to be normal,’ von Moger told cops.

‘I use the testosterone weekly to keep my levels stable. I use the cannabis oil to help me settle and sleep. ‘

Von Moger claimed he also used Viagra – a prescription drug predominantly used to improve erectile function – while he was ‘competing’.

Von Moger played a young Arnold Schwarzenegger (pictured together) in the 2018 film Bigger and has been dubbed ‘Arnold 2.0’ in the bodybuilding world 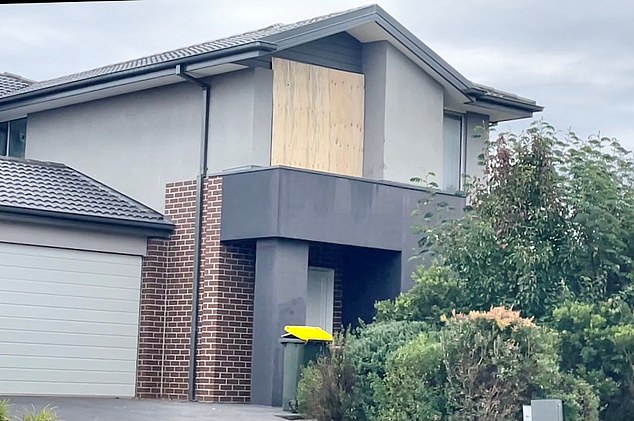 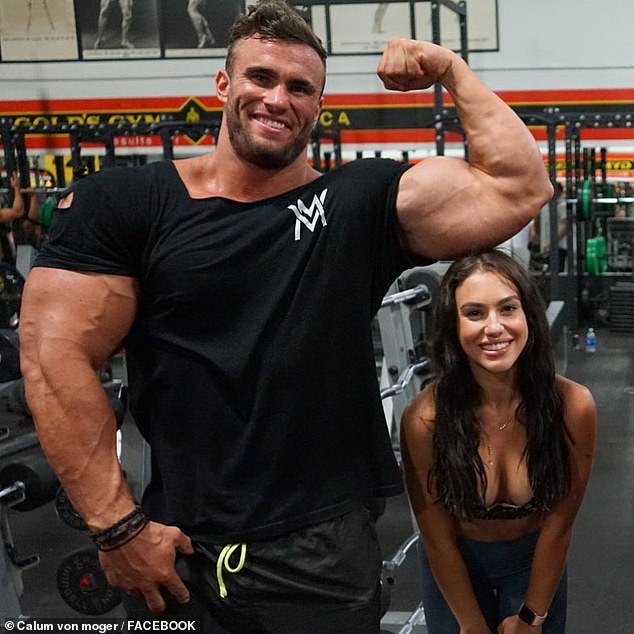 Bodybuilder Calum von Moger, 31, reportedly fell through a window on May 6, injuring his spine

Just days before that arrest, von Moger had been allegedly embroiled in an ugly dispute with a shopper at a Woolworth’s car park in West Melbourne.

That incident saw von Moger slapped with a series of assault-related charges, including affray and conduct endangering life, which he intends to contest in court.

Von Moger’s lawyer, Bernard Campigli, told the court his client had since been accepted into a residential rehabilitation facility, which would treat him for the next month.

The court heard von Moger had been struggling with depression since his father was crippled in a tragic motorbike accident.

In a character reference supplied by the body builder’s mum, the court heard von Moger had been under intense stress leading up to his ‘fall’.

Mr Campigli said while von Moger had a considerable amount of substances in his possession, most of those could have been obtained legitimately with a prescription.

‘He acknowledges he should of had prescribed them,’ he said.

The court heard von Moger was one of six children, growing up in a happy home on Victoria’s Surf Coast.

After initially studying animal husbandry, von Moger took up positions in surf lifesaving, landscape gardening and even did a short stint in the Australian Army.

But it was his work as an outdoor adventure guide that truly won his heart before committing to a career in bodybuilding.

It was that documentary that launched von Moger onto the world stage, Mr Campigli said. 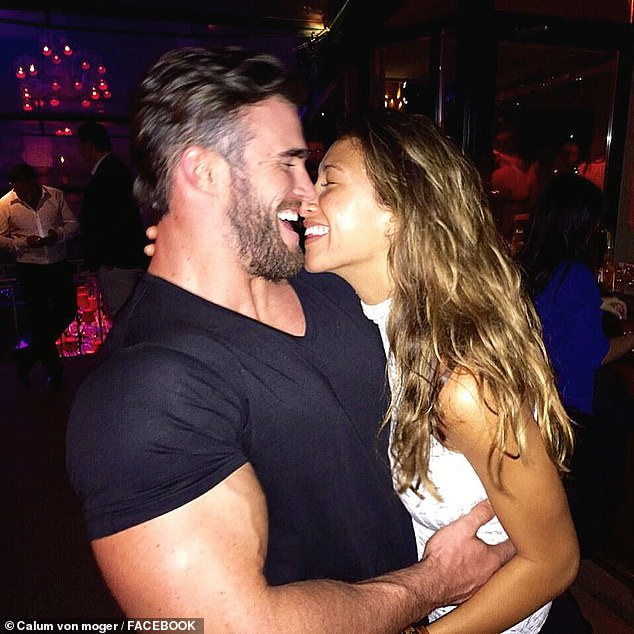 Moger (pictured with a friend) released his own documentary titled Calum von Moger: Unbroken on Netflix in 2019 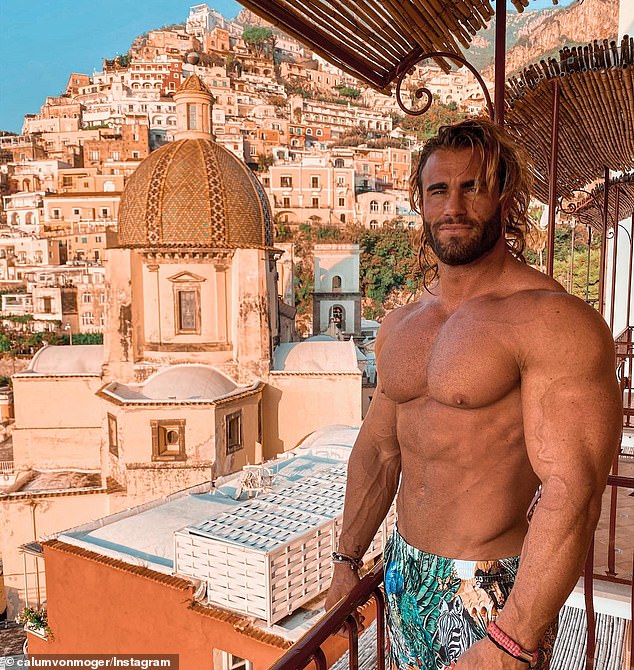 ‘He also starred in the documentary “Generation Iron” in 2017 and played a young Arnold Schwarzenegger in a movie “Bigger”,’ he said.

But it was in Los Angeles where von Moger’s life began to unravel, the court heard.

‘He was a victim of car jackings with firearms which left him scarred and traumatised. He also fell and tore his quad muscle, which set his bodybuilding career back greatly and he suffered depression and anxiety, ‘Mr Campigli said.

Adding insult to injury, von Moger remains caught up in a family court matter in the United States over custody of his two-year old son.

At his lowest ebb, von Moger’s support dog died, which saw his mental health spiral even further into decline.

The court heard the slowdown of the entertainment industry in the US due to Covid-19 forced von Moger to return to Australia.

‘Unfortunately he spiralled out of control soon after. He had taken testosterone for a number of years … and unfortunately other substances came into the picture and he struggled in the last few months to find balance, ‘Mr Campigli said. 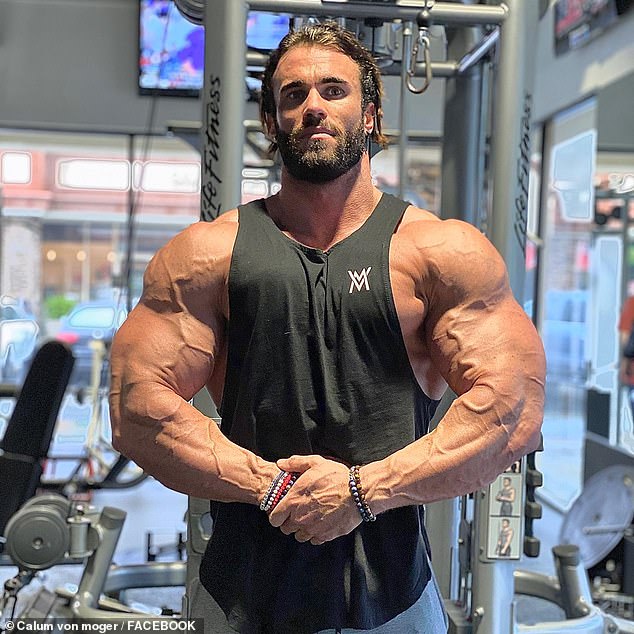 The Australian’s first acting gig was in 2017 for the film Generation Iron 2, but he’s best known for his portrayal of a young Arnold Schwarzenegger in the 2018 movie Bigger 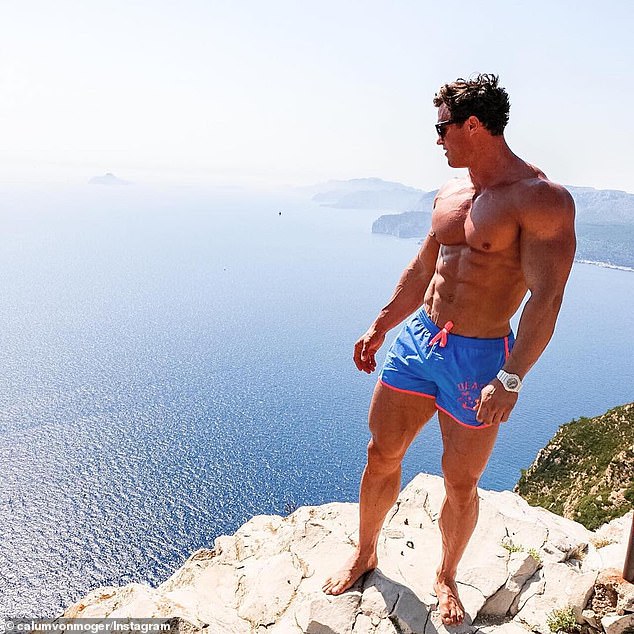 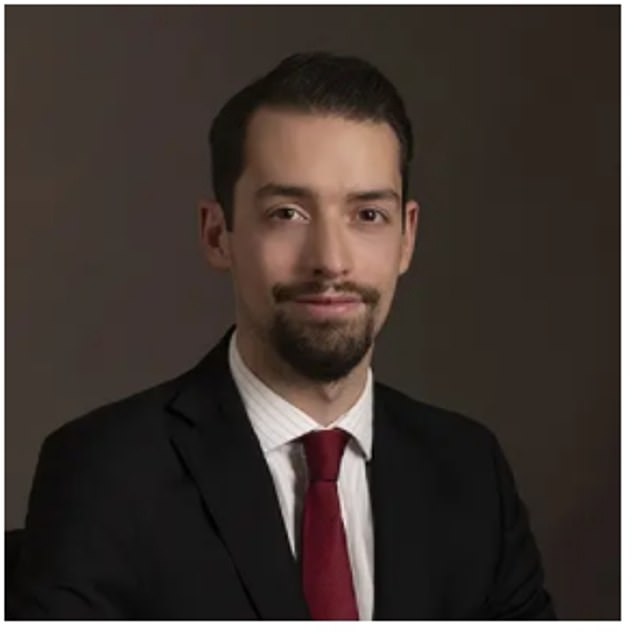 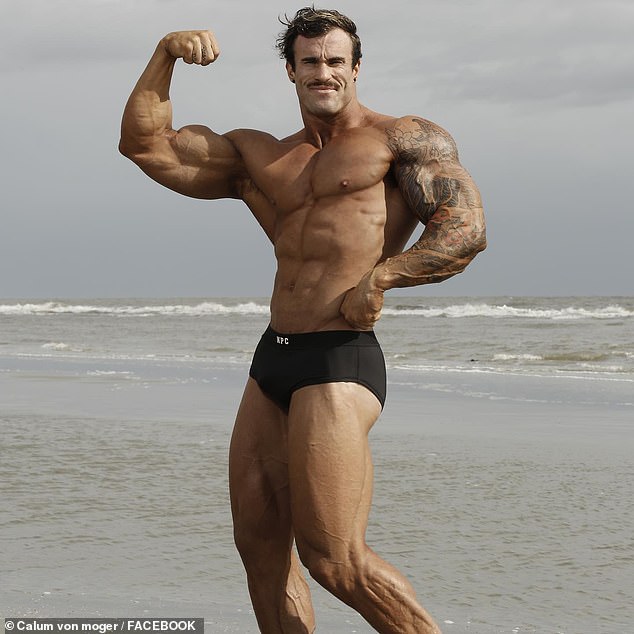 The court heard von Moger spent a night behind bars following his arrest, which acted as a ‘sobering experience’.

But when news of his troubles became known within the bodybuilding community, von Moger’s mental health took another plunge.

‘There was a lot of online hate. If you Google Mr von Moger’s name it comes up with a number of YouTube videos of commentary on his supposed decline, which is very stressful for him and that did not help his substance use, ‘Mr Campigli said.

The court heard von Moger was determined to get his life back in order so that he could return to the US and engage with his son and girlfriend, who has traveled to Melbourne to support him with his legal woes.

Mr Campigli asked Magistrate Roslyn Porter not to convict his client of the charges.

Instead von Moger was simply ordered to pay $ 500 to the court fund, which will go to a court-appointed charity.

WHO IS CALUM VON MOGER?

The Australian’s first acting gig was in 2017 for the film Generation Iron 2, but he’s best known for his portrayal of a young Arnold Schwarzenegger in the 2018 movie Bigger.

The film was based on Joe and Ben Weider, the two brothers who co-founded the International Federation of BodyBuilders and put the sport on the map.

Moger then released his own documentary titled Calum von Moger: Unbroken on Netflix in 2019.

The film detailed Moger’s rise through the bodybuilding ranks to a point where he was dubbed ‘Arnold 2.0’ and how that came crashing down following a significant knee and bicep injury while abseiling.

The documentary also gave an insight into his childhood growing up on a farm in central Victoria with five siblings.

He said his love for bodybuilding started at the age of 14 when he and his brother found some old, rusty dumbbells at a warehouse to use.

He quickly rose to fame when he started uploading videos of his physique and training online, with Moger now having more than 3 million Instagram followers.