Snake and spider bites can be venomous and deadly, and scientists recently found that the venom can be more dangerous to humans. 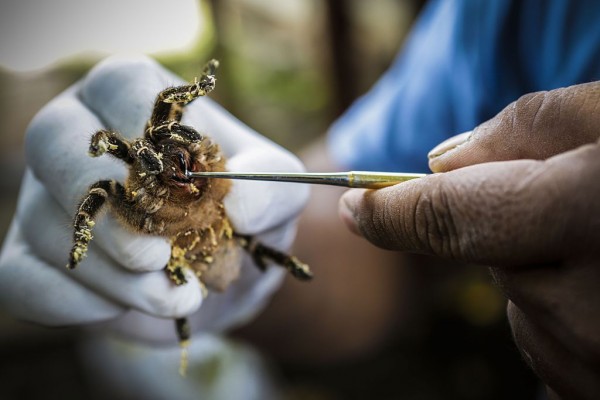 (Photo: Inti Ocon / AFP via Getty Images)
TO GO WITH AFP STORY by Blanca Morel An employee shows the chelicerae and fangs – used to inject venom – of a tarantula, known as Costa Rican Tiger Rump (Cyclosternum fasciatum), at the Exotic Fauna Store in Managua, Nicaragua, on November 24, 2014.

Venom is considered by some to be sterile, which means it’s free from bacteria, and this is because of the antimicrobial substances in it. However, that may not be the case this time around.

UK researchers found a piece of strong evidence that the bacteria in venom evolves to survive in the venom glands of the animals and in the venom liquid itself.

They investigated the venom of five snake and two spider species and all of their venoms were host to bacterial DNA. The researchers found that the bacteria mutated over time, which makes it resistant to the harsh venom environment.

Enterococcus faecalis is one type of bacteria found in the venom of black-necked spitting cobras and researchers found that it grew under the harsh conditions.

Sterghios Moschos, associate professor in cellular and molecular sciences at Northumbria University and leader of the study said in a press release, “This is extraordinary because venom is like a cocktail of antibiotics, and it is so thick with them, you would have thought the bacteria would not stand a chance. Not only did they stand a chance, they had done it twice, using the same mechanisms. “

Also Read: Next Blockbuster Painkiller Could Be Inspired By Opioid-Like Venom of Aquarium Fish

Questions About the Sterility of their Venom Answered?

For years, researchers have been looking to animal venoms for the next generation of antibiotics. However, with this recent finding and a November 5 biorXiv preprint, it also showed that snake and spider venom may not be sterile.

The idea that animal venoms are free of bacteria has been around since the mid-20th century.

What Does This Mean for Human Victims

With these new findings, human victims that are bitten by snakes or spiders should also consider getting treated for infections as well.

University of Arizona medical toxicologist Leslie Boyer who has treated snakebite cases for decades says she is skeptical that the microbes in the paper have immediate clinical relevance, “There’s a big difference between good basic science and meaningful applied clinical science. And this is the first step in a path that could conceivably lead to clinical implications, but it has not got them yet, “she said.

Researchers started documenting the antimicrobial activities of venoms and their components in the mid-20th century, which was then translated into clinical practice and snakebites have not been treated for infection since then. However, Sébastien Larréché, a clinical microbiologist at the Hôspital d’Instruction Des Armées Begin in France said “new culture-free methods suggest that no anatomical area is really sterile by humans. By extrapolation, we can therefore assume that the venomous apparatus has its own microbiota. “

Related Article: Will Bee, Snake, and Scorpion Venom Be the Future of Cancer Treatments?

This article is owned by TechTimes

“Soft” CRISPR May Offer a New Fix for Genetic Defects