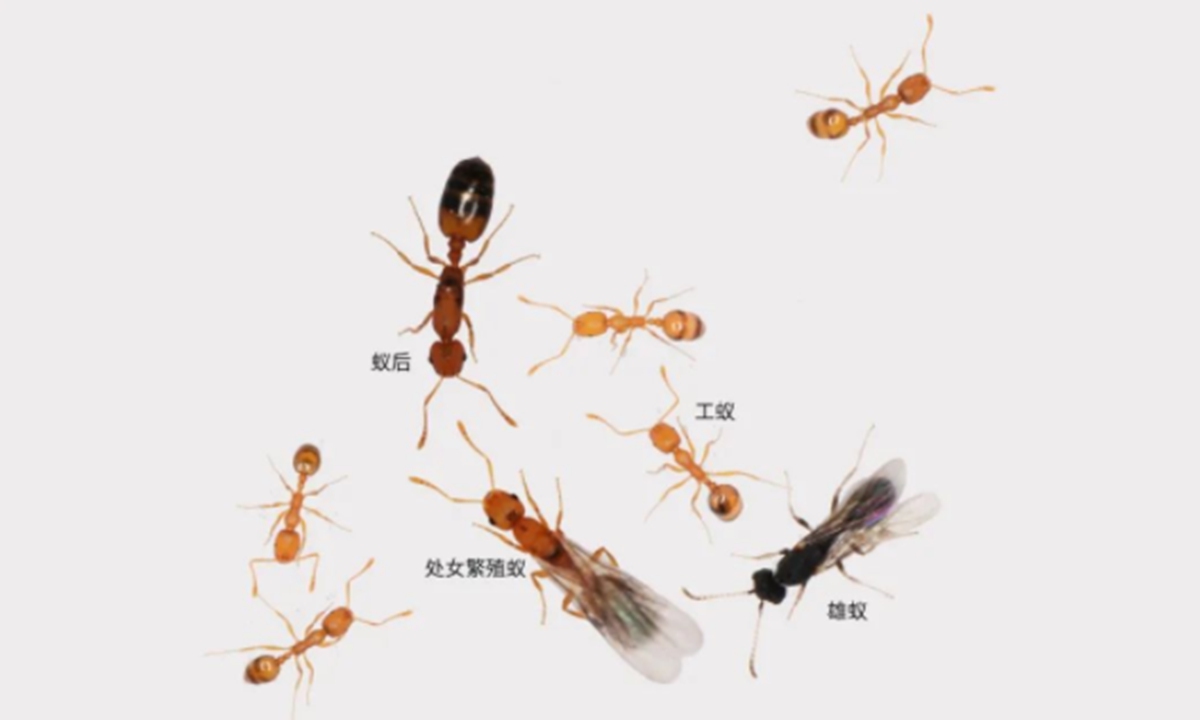 The four different types of ants in a colony – worker, male, gyne and queen Photo: Courtesy of BGI Group

Why can’t ants, creatures that have existed for more than 140 million years, live alone? China’s scientists in Shenzhen and Kunming, Yunnan Province, have recently discovered the answer to this question by studying how these insects’ brains work.

These four types of ants and their different roles demonstrate the clear social division of labors in an ant colony and the ants’ highly social nature.

A worker ant, which has completely degraded ovaries, is responsible for foraging and “childcare.” A male ant lives with the goal of finding a desirable queen to mate with.

The gyne is a potential queen ant that has not yet mated. As the name suggests, a queen’s full-time job is laying eggs for the colony, which is why they tend to have longer life spans.

Li Qihua, head of the research project at the BGI Group in Shenzhen, Guangdong Province, explained to the Global Times that such clear social responsibilities within a colony have led each type to have different brain structures.

“Workers are more olfactory-oriented while males are visual-oriented, possibly due to the fact they rely on their eyesight to find suitable mates,” Li said.

“Such brains are designed for completing specific tasks.”

Researcher Liu Weiwei, who took part in the project from the Kunming Institute of Zoology, told media that, despite the differences between these ants, their jobs complement each other, allowing a colony to become a true “superorganism” that includes all functions such as reproduction, nurturing, feeding and defense at the same time.

Besides the two Chinese research institutions, the project researchers also collaborated with scientists from Copenhagen University in Denmark. The project’s findings were published in the International academic journal Nature Ecology & Evolution on June 16.

Liu Chuanyu, another researcher with the BGI Group, told media that the study provides scientists with a better understanding of ants’ brain structures and their sociability. Liu noted that with the further development of research methods such as the single-cell technology, the study will be able to better further humanity’s understanding of life.

Lasers light the way to discovery of ancient crust beneath WA