Scientists emulate nature in quantum leap towards computers of the future

A team of quantum computer physicists at UNSW Sydney have engineered a quantum processor at the atomic scale to simulate the behavior of a small organic molecule, solving a challenge set some 60 years ago by theoretical physicist Richard Feynman.

The achievement, which occurred two years ahead of schedule, represents a major milestone in the race to build the world’s first quantum computer, and demonstrates the team’s ability to control the quantum states of electrons and atoms in silicon at an exquisite level not achieved before.

In a paper published today in the journal Naturethe researchers described how they were able to mimic the structure and energy states of the organic compound polyacetylene – a repeating chain of carbon and hydrogen atoms distinguished by alternating single and double bonds of carbon.

Lead researcher and former Australian of the Year, Scientia Professor Michelle Simmons, said the team at Silicon Quantum Computing, one of UNSW’s most exciting start-ups, built a quantum integrated circuit comprising a chain of 10 quantum dots to simulate the precise location of atoms in the polyacetylene chain. 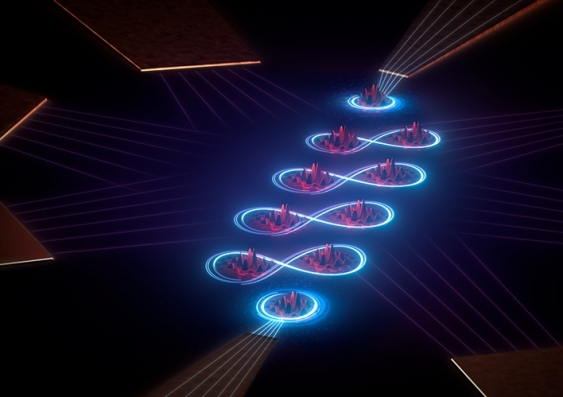 An artist’s impression of inside the quantum integrated circuit modeling the carbon chain. The simulated carbon atoms are in red, while the blue depicts electrons exchanged between them. Image: SQC

“If you go back to the 1950s, Richard Feynman said you can not understand how nature works unless you can build matter at the same length scale,” Prof. Simmons said.

“And so that’s what we’re doing, we’re literally building it from the bottom up, where we are mimicking the polyacetylene molecule by putting atoms in silicon with the exact distances that represent the single and double carbon-carbon bonds.”

The research relied on measuring the electric current through a deliberately engineered 10-quantum dot replica of the polyacetylene molecule as each new electron passed from the source outlet of the device to the drain – the other end of the circuit.

To be doubly sure, they simulated two different strands of the polymer chains.

Not only did the measurements match the theoretical predictions, they matched perfectly.

‘We should have some kind of commercial outcome from our technology five years from now.’ – Michelle Simmons

“What it’s showing is that you can literally mimic what actually happens in the real molecule. And that’s why it’s exciting because the signatures of the two chains are very different, ”Prof. Simmons said.

“Most of the other quantum computing architectures out there haven’t got the ability to engineer atoms with sub-nanometer precision or allow the atoms to sit that close.

“And so that means that now we can start to understand more and more complicated molecules based on putting the atoms in place as if they’re mimicking the real physical system.”

Standing at the edge

According to Prof. Simmons, it was no accident that a carbon chain of 10 atoms was chosen because it sits within the size limit of what a classical computer is able to compute, with up to 1024 separate interactions of electrons in that system. Increasing it to a 20-dot chain would see the number of possible interactions rise exponentially, making it difficult for a classical computer to solve.

“We’re near the limit of what classical computers can do, so it’s like stepping off the edge into the unknown,” she says.

“And this is the thing that’s exciting, we can now make bigger devices that are beyond what a classical computer can model. So we can look at molecules that have not been simulated before. We are going to be able to understand the world in a different way, addressing fundamental questions that we’ve never been able to solve before. ”

One of the questions Prof. Simmons alluded to is about understanding and mimicking photosynthesis – how plants use light to create chemical energy for growth. Or understanding how to optimize the design of catalysts used for fertilizers, currently a high-energy, high-cost process.

“So there’s huge implications for fundamentally understanding how nature works,” she said.

Much has been written about quantum computers in the last three decades with the billion-dollar question always being ‘but when can we see one?’.

Prof. Simmons says that the development of quantum computers is on a comparable trajectory to how classical computers evolved – from a transistor in 1947 to an integrated circuit in 1958, and then small computing chips that went into commercial products like calculators approximately five years after that.

“And so we’re now replicating that roadmap for quantum computers,” Prof. Simmons says.

The authors of the Nature paper in the Silicon Quantum Computing laboratory.

“We started with a single atom transistor in 2012. And this latest result, realized in 2021 is the equivalent of the atom-scale quantum integrated circuit, two years ahead of time. If we map it to the evolution of classical computing, we’re predicting we should have some kind of commercial outcome from our technology five years from now. ”

One of the advantages that the UNSW / SQC team’s research brings is that the technology is scalable because it manages to use fewer components in the circuit to control the qubits – the basic bits of quantum information.

“In quantum systems, you need something that creates the qubits, some kind of structure in the device that allows you to form the quantum state,” Prof. Simmons says.

“In our system, the atoms themselves create the qubits, requiring fewer elements in the circuits. We only needed six metallic gates to control the electrons in our 10-dot system – in other words, we have fewer gates than there are active device components. Whereas most quantum computing architectures need almost double the number or more of the control systems to move the electrons in the qubit architecture. ”

Needing fewer components packed in tightly together minimizes the amount of any interference with the quantum states, allowing devices to be scaled up to make more complex and powerful quantum systems.

“So that very low physical gate density is also very exciting for us, because it shows that we’ve got this nice clean system that we can manipulate, keeping coherence across long distances with minimal overhead in the gates. That’s why it’s valuable for scalable quantum computing. ”

Looking ahead, Prof. Simmons and her colleagues will explore larger compounds that may have been predicted theoretically, but have never been simulated and fully understood before, such as high temperature superconductors.