Despite soccer being a popular sport in Southern California and globally, it’s been 12 years since LA had a women’s pro team. That was the LA Sol, which only lasted one season before folding.

Women’s professional sports teams often struggle to remain viable, but Angel City has some big-name investors and owners, like Natalie Portman, Mia Hamm, and Serena Williams. In its first season, the team says it is already averaging more than 18,000 fans in the stands at each game. That’s significantly better attendance than just about any other team in the women’s pro league. 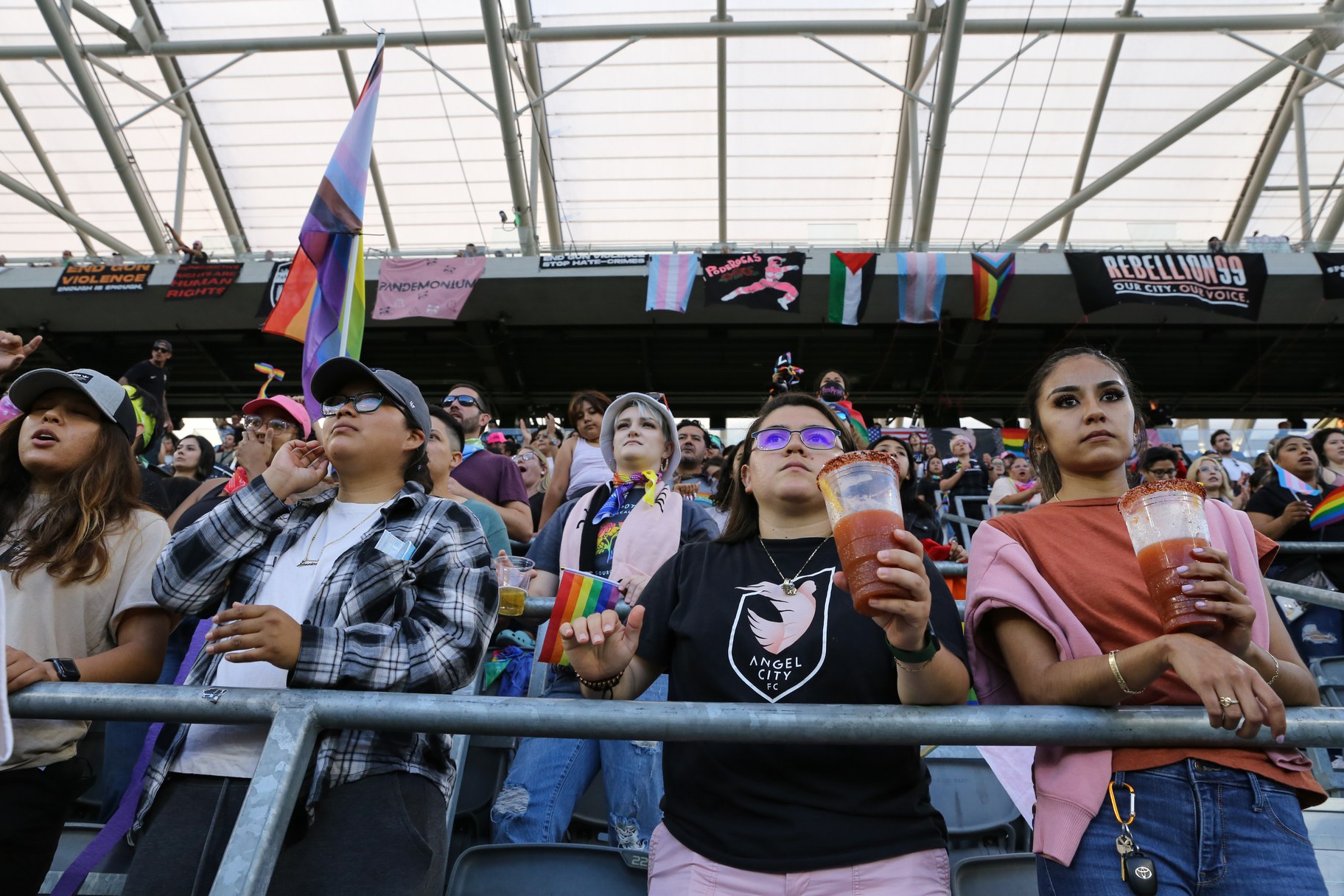 Angel City FC has an average attendance of 18,000 fans per game in their first season. Photo by Zaydee Sanchez for KCRW. 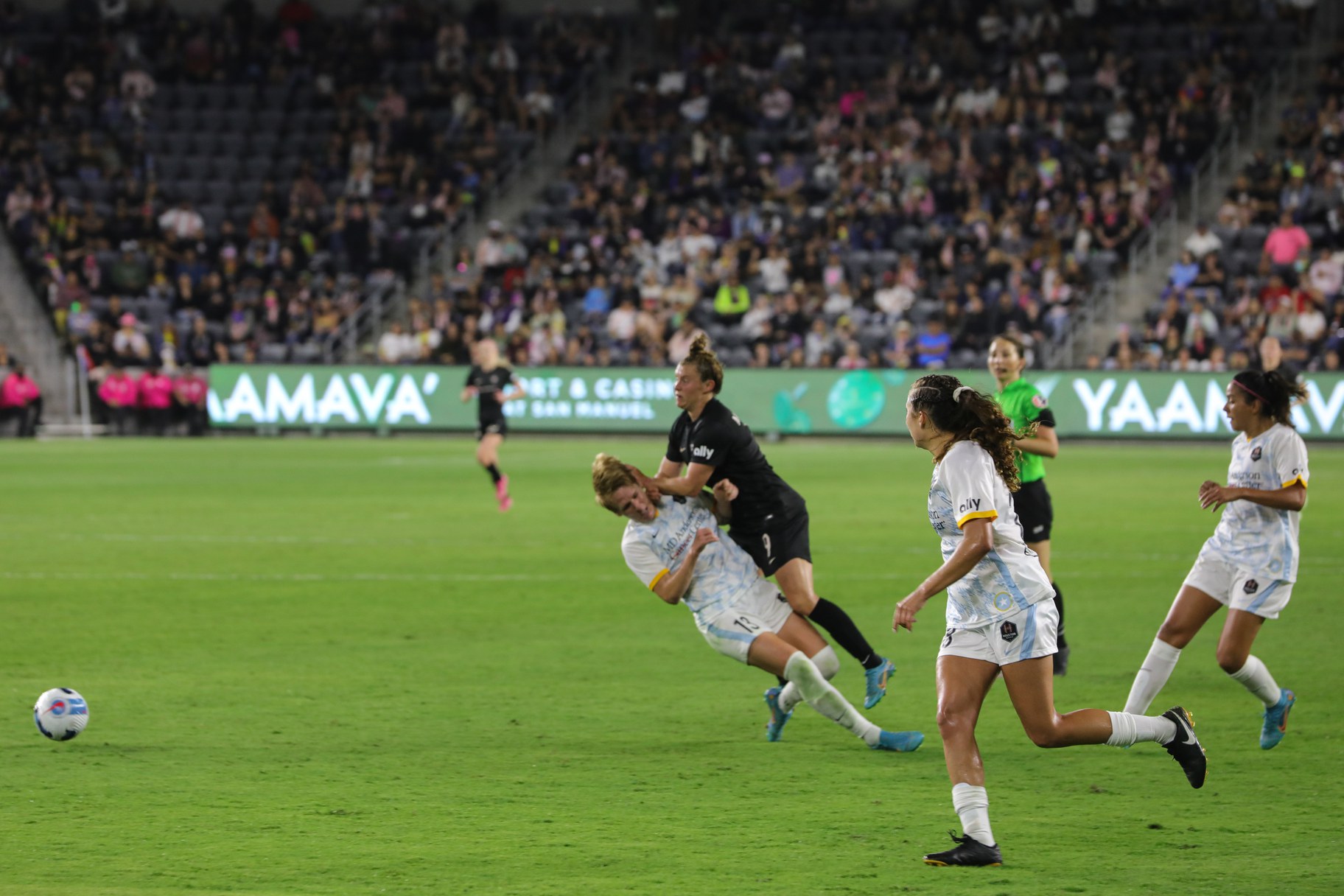 Players collide in a recent game between Angel City FC and the Houston Dash. Photo by Zaydee Sanchez for KCRW.

Ariana Nierojewski and Deanna Rivera attended an Angel City FC game in early June. They tell KCRW that they play soccer as well, and are happy to finally have a women’s pro team to follow in LA. Like many other fans, they usually arrive early to games, so they can hang out and prepare for the fun. 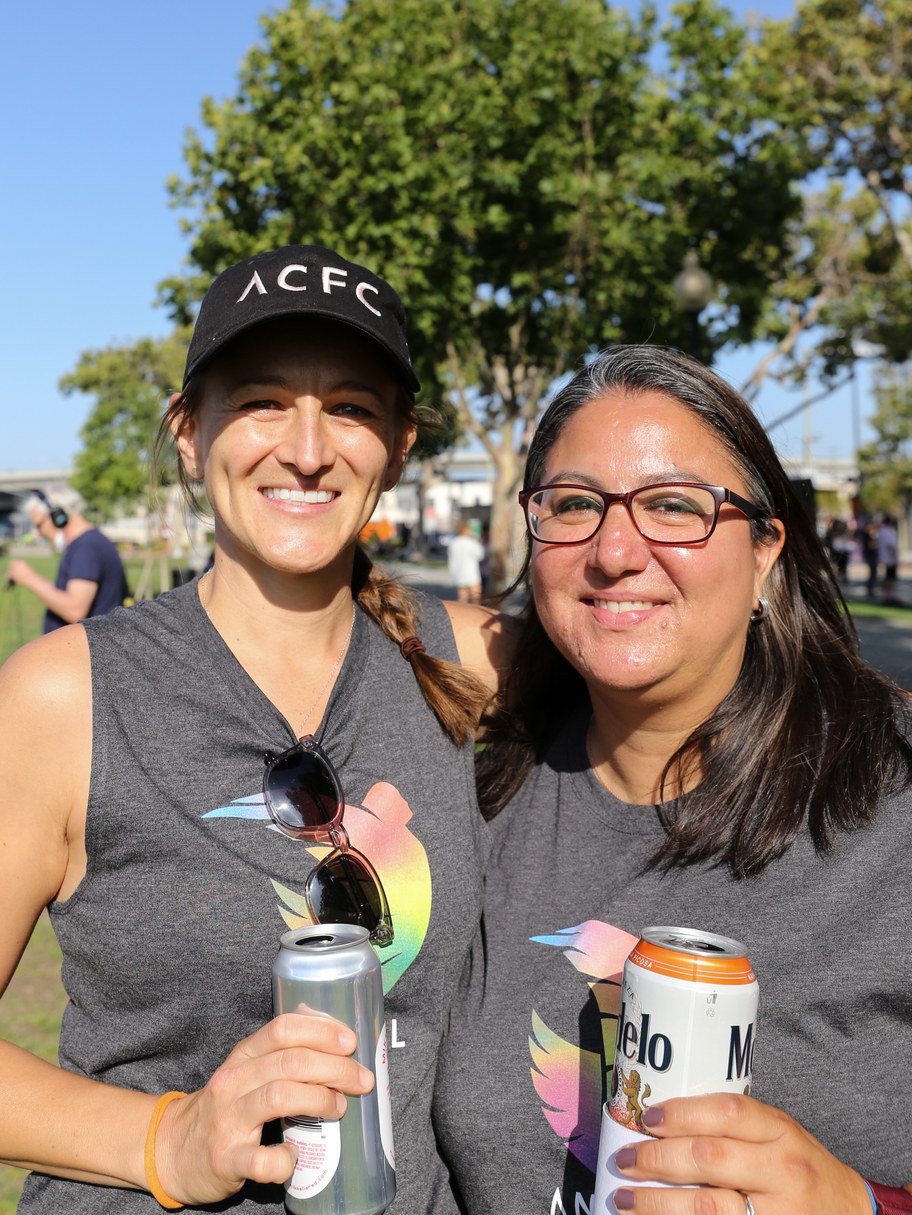 Ariana Nierojewski (left) and Deanna Rivera (right) say they are both soccer players and are very happy that LA finally has a pro women’s team again. Photo by Zaydee Sanchez for KCRW.

George Zamora says he’s a season ticket holder because he wants to support women’s soccer, women’s rights, and equality. He says three of his kids – two boys and a girl – play the sport. 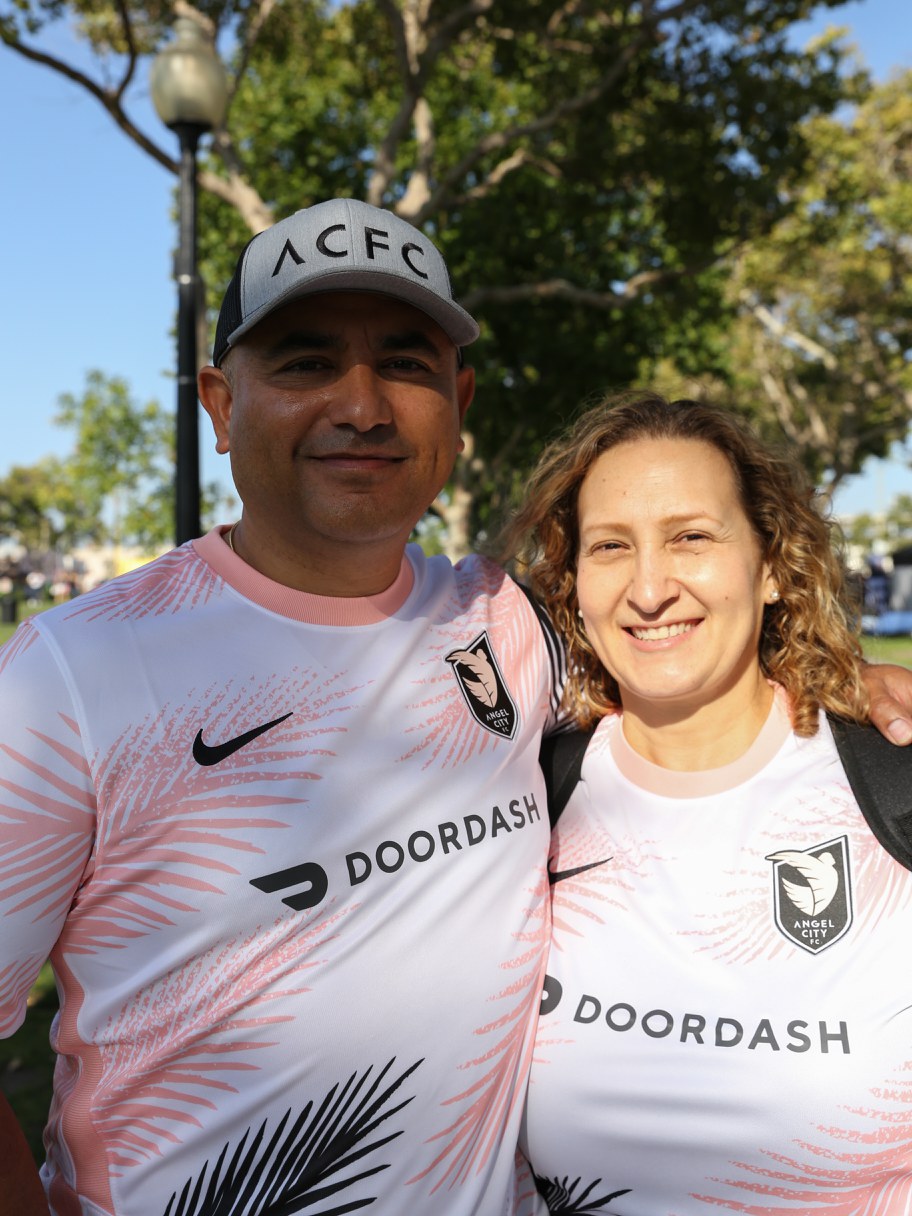 George Zamora says he has a young daughter who plays the game, and he bought season tickets because he wants to support women’s soccer. Photo by Zaydee Sanchez for KCRW.

Eniola Aluko is Angel City’s sporting director, which means she had the primary responsibility for building the team. She’s a former professional player in England, where she played for the national women’s team.

She says the world is changing when it comes to women’s pro sports. “For me growing up… this was not a reality for me, people coming and watching women’s sports. As a young girl, I did not aspire to be a professional because it just did not exist. … So I’m so grateful for… the perception that has changed a women’s sport. Not just for women, for young boys and men – it’s so amazing to see. ”

She says she also looks forward to a time when gender is not the focus of the conversation. “It’s more like: That is just great soccer.” 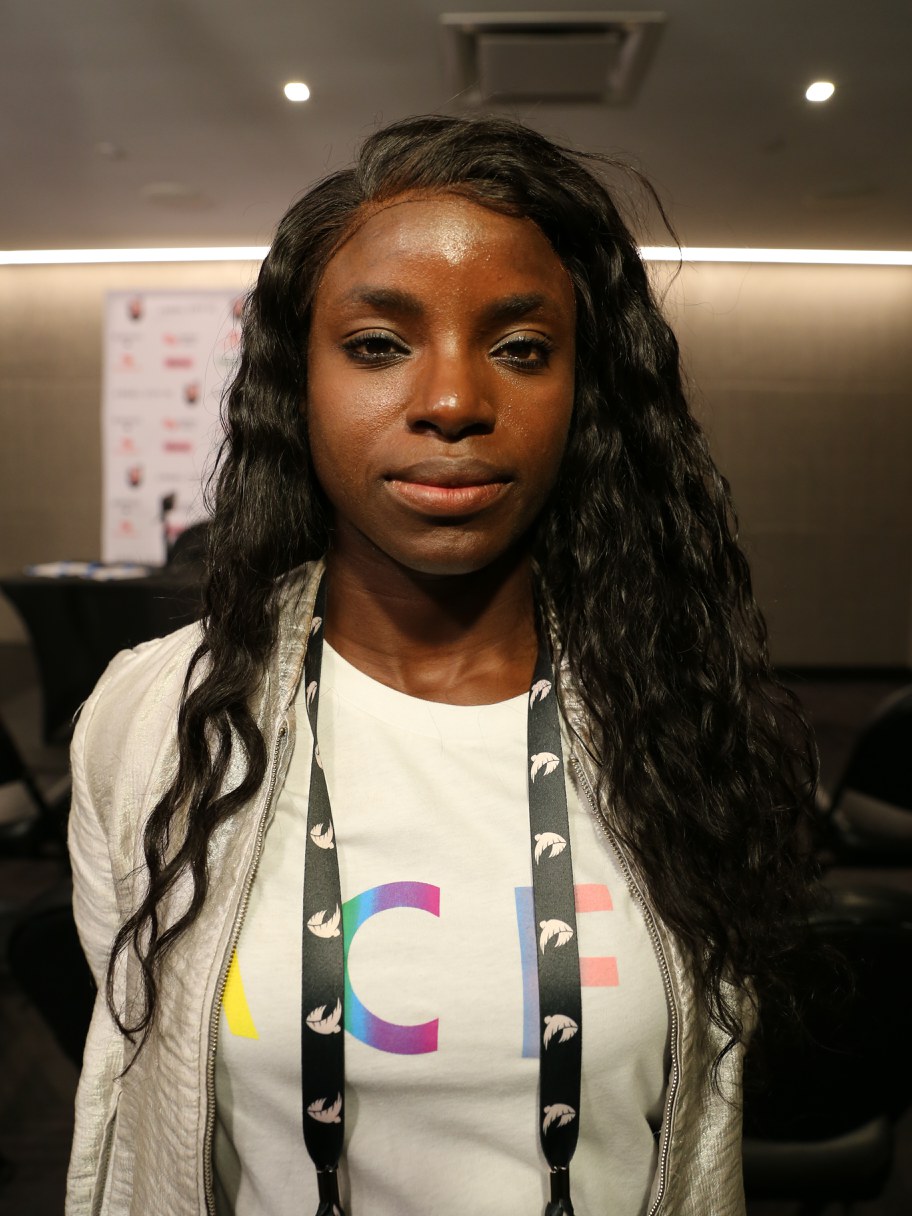 Eniola Aluko, Angel City’s sporting director, says, “As a young girl, I did not aspire to be a professional because it just did not exist. And now we’re in a completely different world. ” Photo by Zaydee Sanchez for KCRW.

Aluko goes on to say that one of the things that attracted her to working with Angel City is the organization’s commitment to addressing pay equity and finding creative revenue streams for its players. Professional male soccer players are paid more. But Aluko points out, “Men’s football is 100 years older than women’s football. But if you told me 20 years ago that this would be possible what we’re doing now, I would have said, ‘no way.’ So let’s see what the next 20 years holds for women’s football. ” 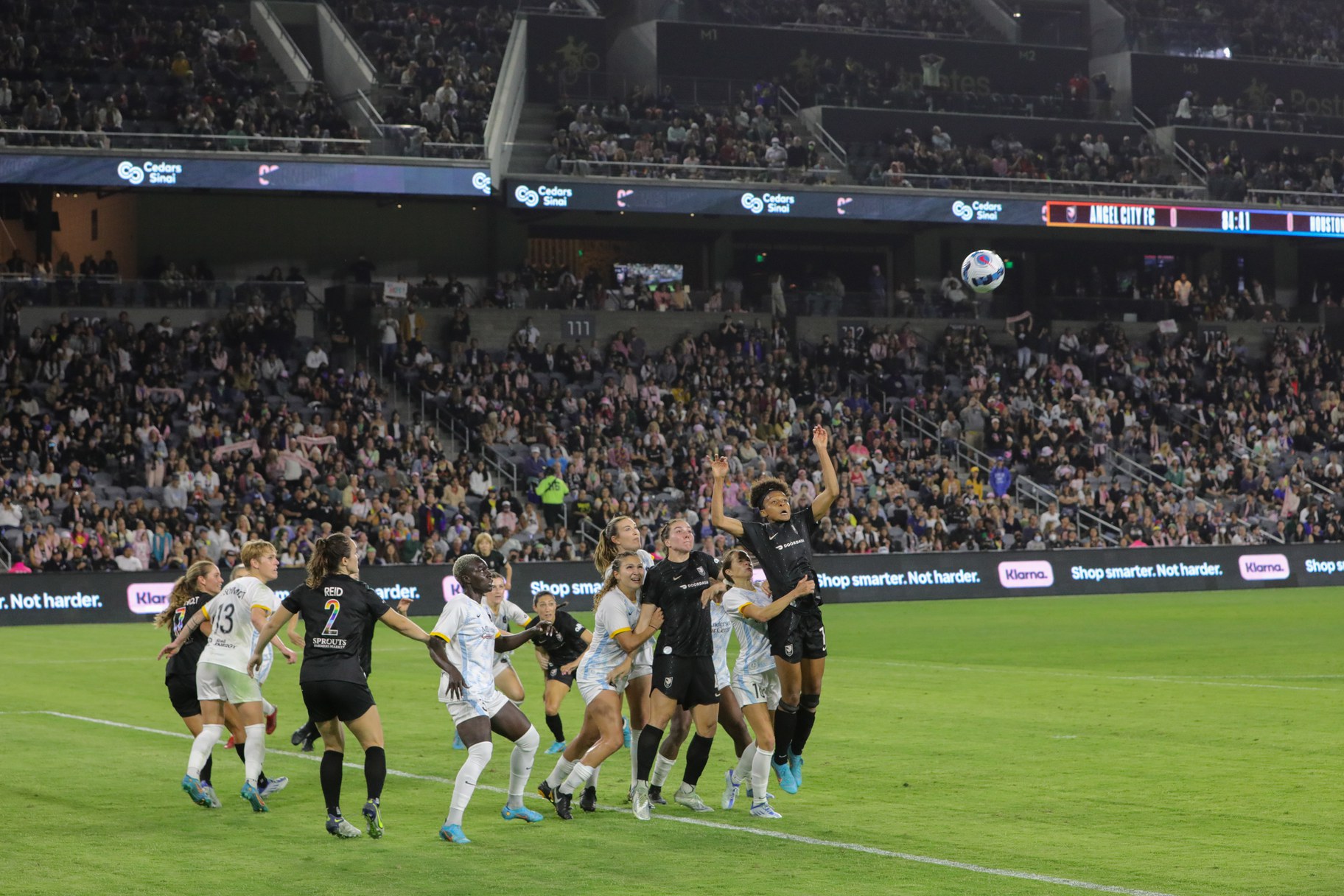 Players prepare to fight for the ball after a corner kick. Angel City players are wearing their black home kit. Photo by Zaydee Sanchez for KCRW.

Angel City star defender Sarah Gorden injured her ACL during the pre-season, and rehab will take six to nine months. She’s understandably frustrated having to watch the team from the sidelines, but she’s glad her teammates are doing well, and she’s amazed at the size of the crowds coming to the games. She says her previous team, the Chicago Red Stars, had nothing like that kind of fanbase.

“We had some great supporters in Chicago. They were very loyal. But the numbers were not there compared to this. This is crazy. I’ve only seen this in like Portland, when I’ve traveled to Portland to play. So I’ve never actually played with the crowd behind me. ” 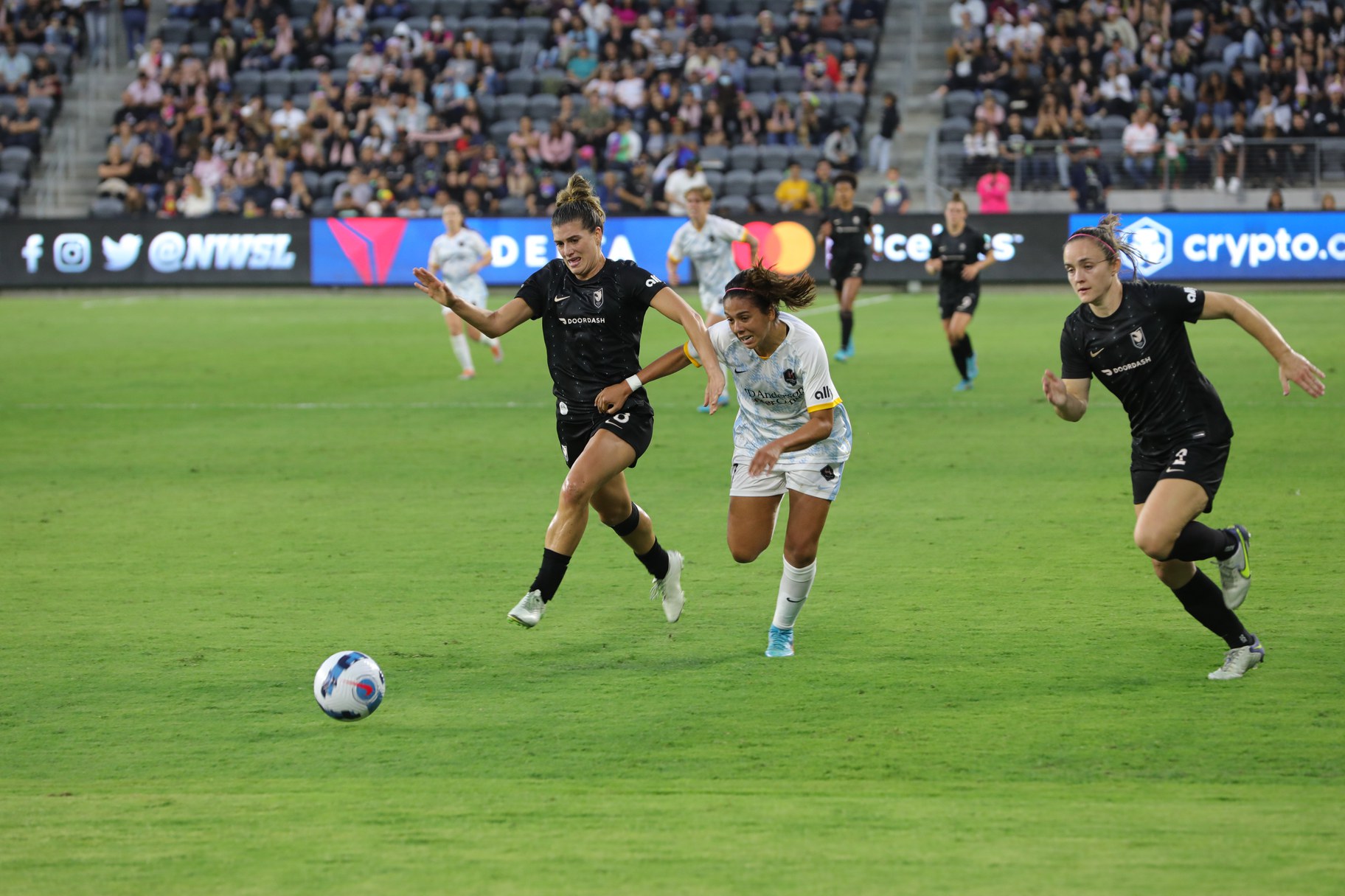 Players fight for the ball in an early June game between Angel City FC and the Houston Dash. Photo by Zaydee Sanchez for KCRW. 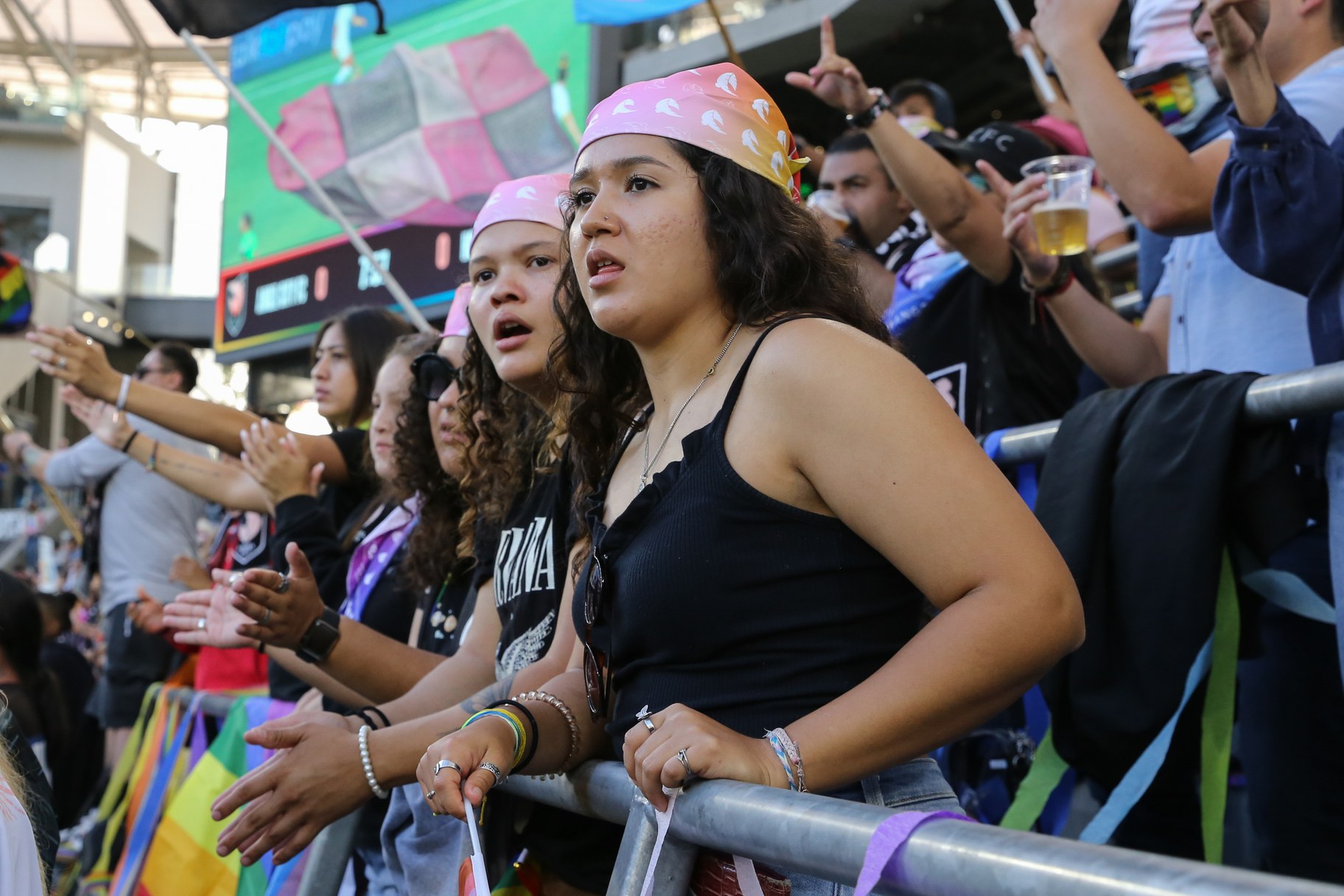 The most rabid supporters congregate in the stand called the North End, where they fly flags, blow horns, chant and sing, and generally make noise throughout the game in support of their team. Photo by Zaydee Sanchez for KCRW.

In the North End, the stand with all the supporter groups and the most vocal and rabid fans, various flags are flying, along with occasional smoke bombs. Chanting, singing, and drumming are constant throughout the game.

Angelique Johnson, also known as Angelique the Artist, is here cheering for the first time. “I’m cheering on Angel City Football Club, cheering on women’s sports, cheering on female empowerment, and pride. … The passion that women have for sports as players and as supporters is out of this world, we just do not get that representation. So I love this, I’m here for it. ”

Gilbert Martinez is a season ticket holder. He says he has three daughters, and it’s “good for them to be able to see that women can play sports too.” He says he likes this section, which is “where the party is at.” 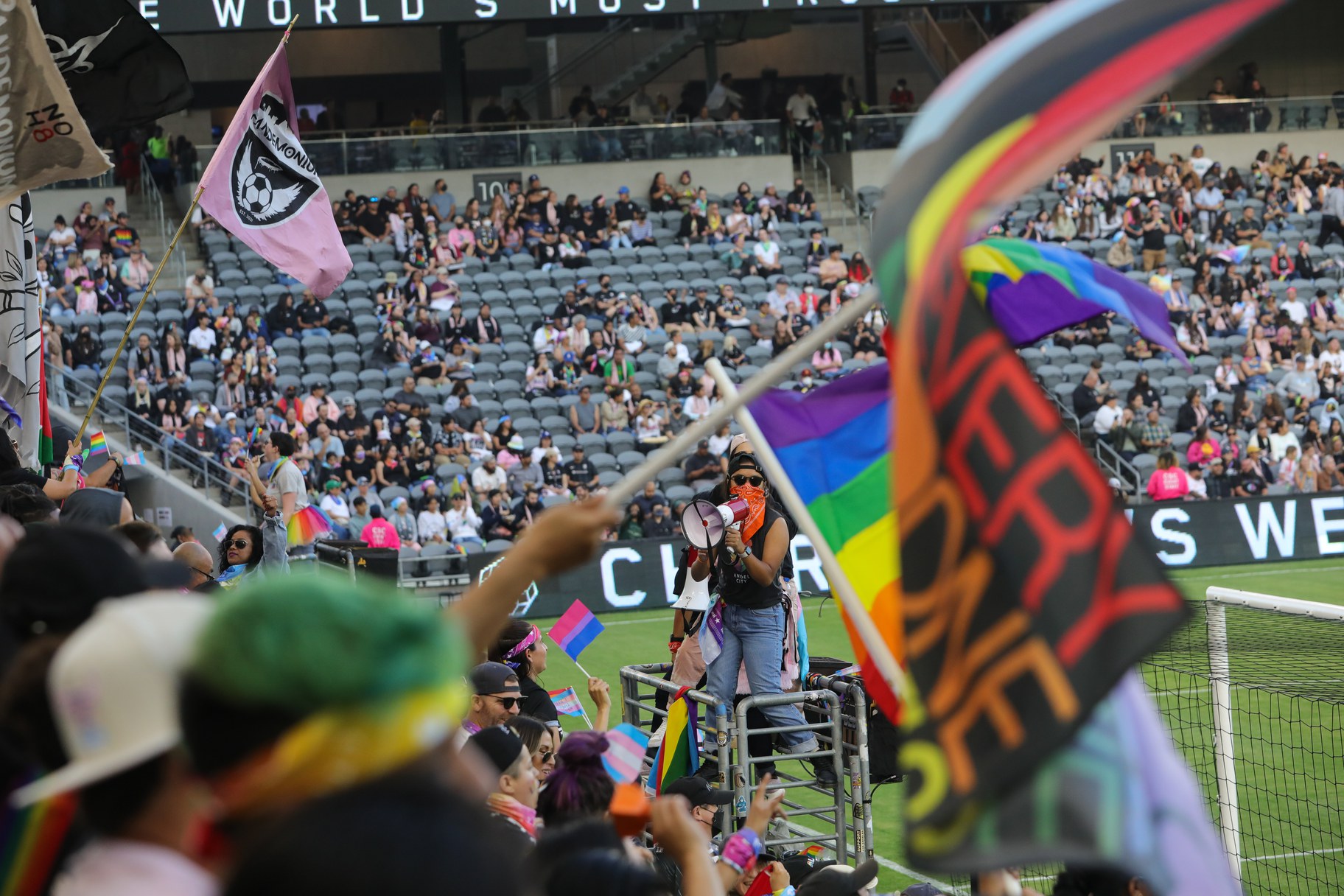 Fans wave flags, including to show their LGBTQ + pride, during a recent Angel City FC game in June, which is pride month. Photo by Zaydee Sanchez for KCRW. 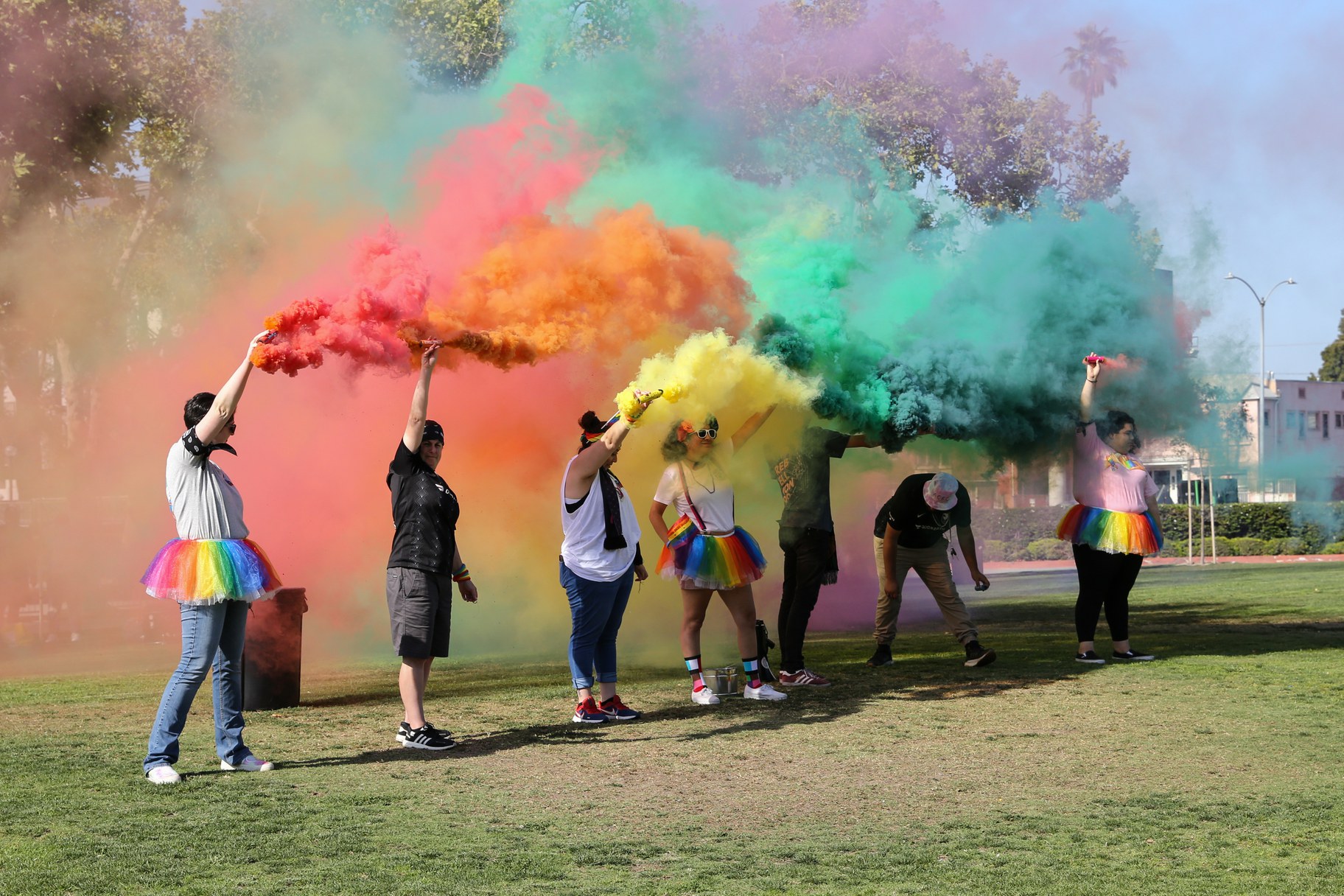 It was pride night at an Angel City FC game in early June. Photo by Zaydee Sanchez for KCRW.

After 90 minutes of action, the game ends nil-nil. The folks in the North End are still drumming and cheering as the players come over and wave and applaud their fans. Soccer is one of the few sports in which a scoreless draw can be an exciting nail-biter.

So far in its inaugural season, Angel City FC is mid-table. Going into its next game against the powerhouse Portland Thorns, it has four wins, four losses, and this draw. But with more than 18,000 people in the stands on a weeknight, it feels like another win for this brand new franchise. 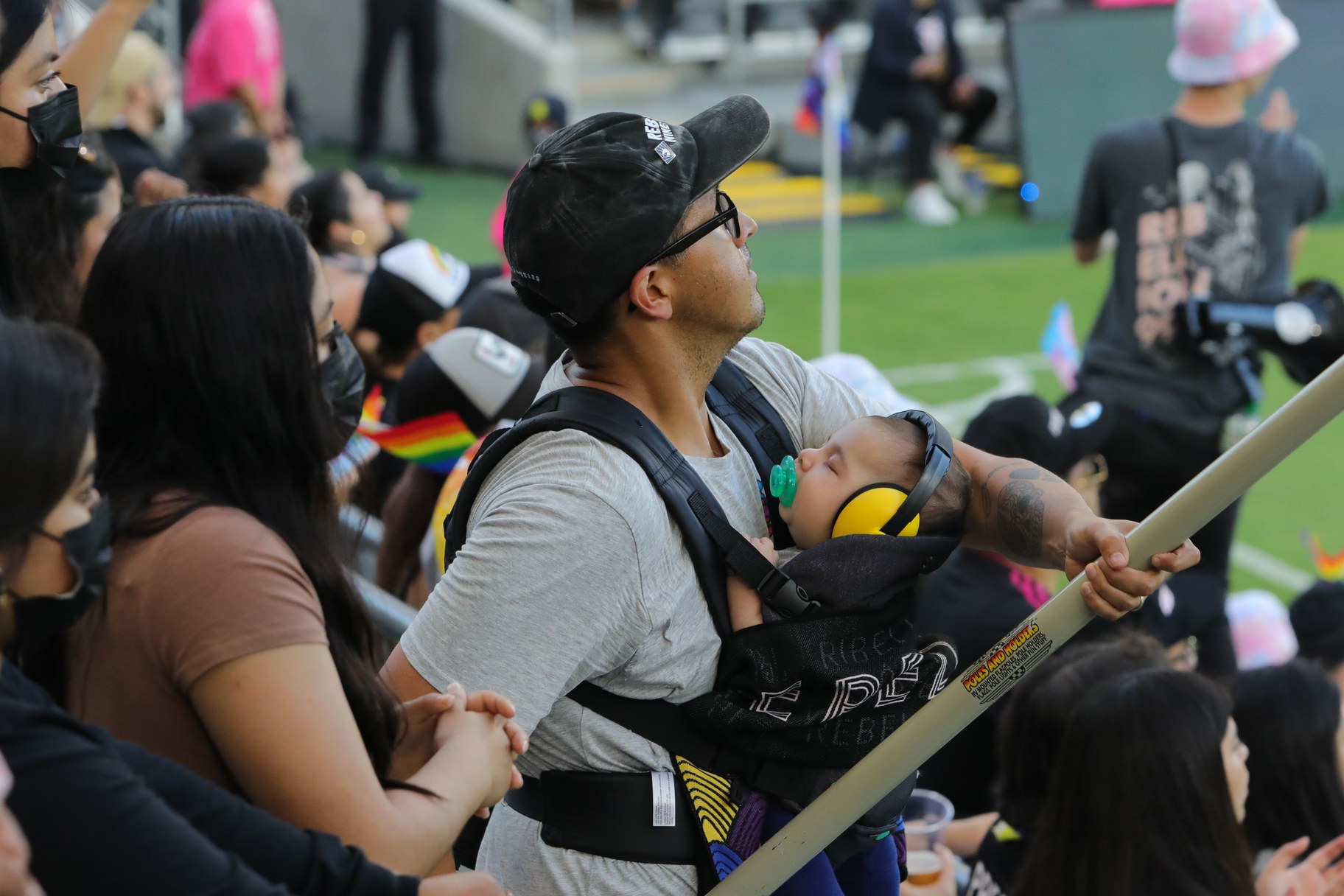 An Angel City FC fan brings his young baby to a game in early June. Photo by Zaydee Sanchez for KCRW.

Afghan man charged in killings of Muslims in New Mexico

More buses packed with migrants from Texas arrive in NYC