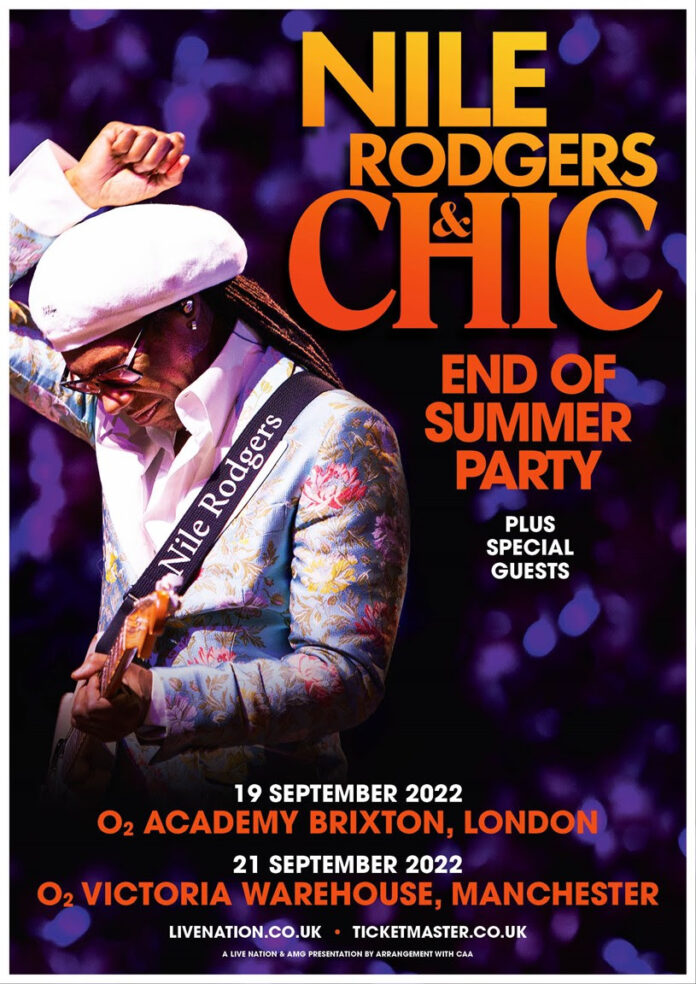 Nile Rodgers and Chic have announced two massive concert appearances at the iconic London venue O2 Academy Brixton, on Monday 19th September 2022 as well as a second show at O2 Victoria Warehouse, Manchester on the 21st of September.

Nile Rodgers is truly exceptional. He’s a multiple GRAMMY-winning composer, producer, arranger and guitarist who’s been inducted into both the Rock & Roll Hall of Fame and the Songwriters Hall of Fame. As the co-founder of CHIC Rodgers pioneered a musical language that generated chart-topping hits like “Le Freak,” (the biggest selling single in the history of Atlantic Records) and sparked the advent of hip-hop with “Good Times”.

Nile transcends all styles of music and has been a part of some of the most important and successful albums in the careers of legends such as Diana Ross, David Bowie, Madonna, Duran Duran and Daft Punk. A legacy that is responsible for over 500 million record sales.

His unforgettable live performances with CHIC cover his entire discography and have been included in “festival best performances” at both Glastonbury and Coachella resulting in a BBC Music Awards nomination for “Best Live Performance”, and the LA Times stating, “Nile Rodgers influence stretches all over Coachella, beaming the sound of a better future”.

Nile Rodgers said, “After the blues of Covid we’ve had an incredible summer in the UK getting up front and close with all of our incredible fans. What better way to celebrate the last day of summer and the first day of autumn than with our final UK shows of the year at Brixton and Manchester. We want to invite all the Lionesses who’ve made the whole country so proud to get up on stage for what will truly be Good Times!”

Tickets go on general sale Friday 5th August at 10am via LiveNation.co.uk

Emergency services deal with “concern for safety incident” at Pontcysyllte

Emirates Boss Keen For Airbus To Produce An A380 Replacement

Inside the Ilio Nema founder’s wardrobe