Police looking into a knife attack that could have been fatal last year have released images of three men they want to speak to.

The attack happened after an argument on September 4, 2021. Officers were called to reports of a fight outside the King’s Head Yard off Borough High Street.

They found a 45-year-old man who had been stabbed several times outside a club. 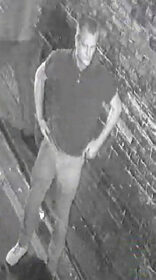 Detective Constable Quinn Furey, of the Met’s Central South Command said: “This was a low-level disagreement that quickly escalated to extreme violence.

“It was pure luck that the victim’s injuries weren’t fatal.

“If you can name any of the men pictured please do the right thing and get in touch.”

Anyone with information should call police on 101 or Tweet @MetCC quoting 1136/4SEP21.

To remain 100 per cent anonymous, call the independent charity Crimestoppers on 0800 555 111 or visit www.crimestoppers-uk.org